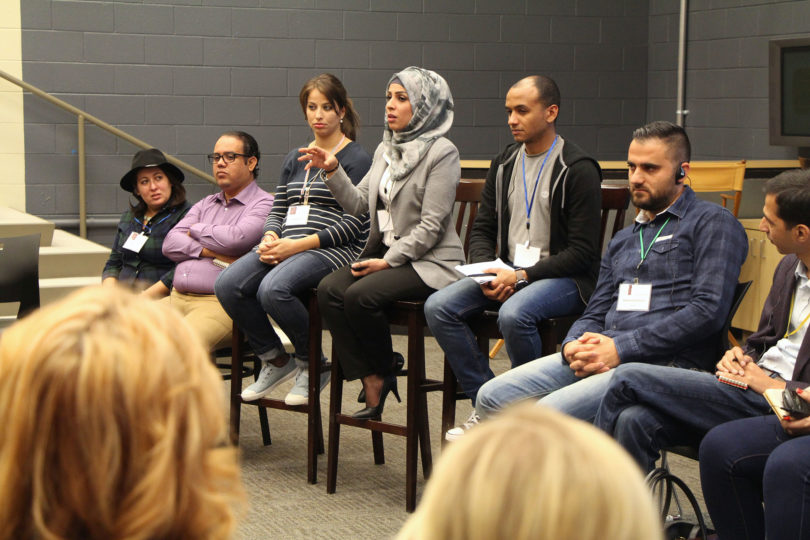 The Grady College of Journalism and Mass Communication hosted international journalists as part of the Edward R. Murrow Program for Journalists

For the eighth consecutive year, UGA’s Grady College of Journalism and Mass Communication was selected to host international journalists who were participating in the Edward R. Murrow Program for Journalists. This year’s program included 16 journalists representing 12 North African and Near East countries.

As in the past, the college’s James M. Cox Jr. Center for International Mass Communication Training and Research organized and managed the program.

“Only seven schools across the country were selected out of about 480 journalism programs, so the fact that our college has been recognized and chosen year after year reflects the merit of our program,” said Tudor Vlad, associate director of the Cox International Center.

Sponsored by the U.S. Department of State’s International Visitor Leadership Program, this year’s Murrow Program brought journalists from Algeria, Bahrain, Egypt, Iraq, Jordan, Lebanon, Libya, Mauritania, Morocco, Palestinian Territories, Saudi Arabia and Tunisia to participate in a three-week visit. The program was designed as an exchange of best practices, an overview of free press in a democracy and the opportunity for the Murrow journalists to gain insight into the social, economic and political structures of the U.S.

The journalists arrived in Athens Nov. 3 and stayed through Nov. 9. They spent the first part of their visit in Atlanta meeting with editors from The Atlanta Journal-Constitution and CNN. They also toured the Athens area and neighboring Oconee County.

While on UGA’s campus Nov. 7-8, the Murrow journalists met with Grady College Dean Charles N. Davis and Murrow student hosts. Designating student hosts was an innovation in the program last year. This year, 12 students served as hosts, one for each of the 12 countries represented by the Murrow delegation.

“Over the past few years, we’ve increased the number of opportunities students have to interact with the journalists and learn from them,” said Lee B. Becker, director of the Cox International Center. “We found that the journalists have enjoyed the chance to spend more one-on-one time with students and the in-depth discussions that have resulted. We’ve had a lot of success, so much so that the State Department has asked that other universities do the same.”

“This was a great opportunity for people from a part of the world that is very important to us, but that we know far less about than we should, to talk to our students, and for our students to share with them their experiences here at Grady College,” Becker said. “The students enjoyed and learned a lot from meeting with the journalists, who seemed very pleased as well.”

Taylor Cromwell, a senior journalism and international affairs double major, was one of the student hosts.

“It was so eye-opening to hear the personal stories of all of these journalists,” Cromwell said. “I found out that we have so much more in common as journalists, even though we all came from very different backgrounds, and I think that everyone could learn from this experience.”

The visiting journalists also had the opportunity to observe the college’s digital and broadcast journalism majors in the newsroom of Grady Newsource on election day and to visit the Red&Black and Flagpole.