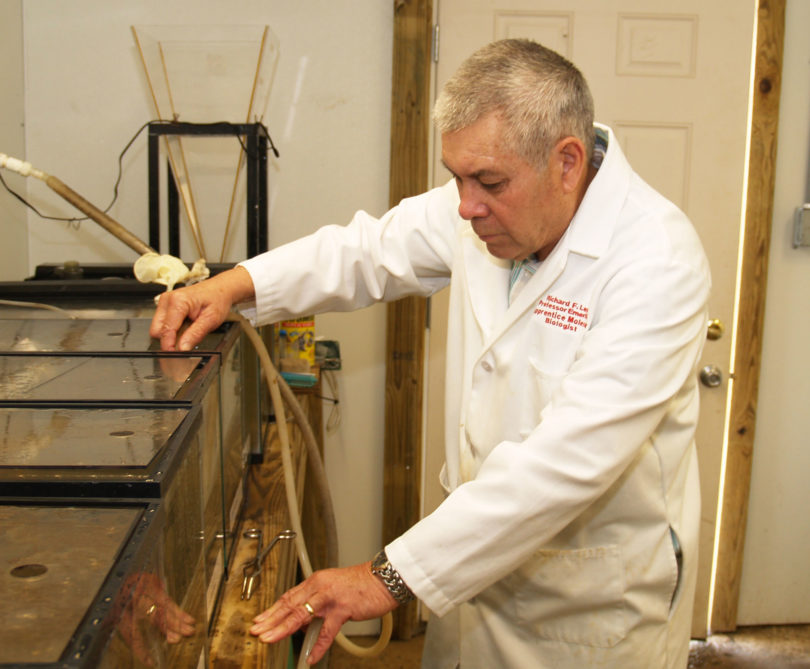 Skidaway Island, Ga. – As the Gulf Coast continues to recover from the effects of the 2010 Deepwater Horizon oil spill, scientists from the University of Georgia Skidaway Institute of Oceanography are continuing to look into the long-term effects of the spill on coastal marine life. A team led by Skidaway Institute professor Richard Lee recently completed preliminary work into the effect dispersed and emulsified oil has on blue crabs and shrimp. The project includes vital information from fishermen and crabbers in the Gulf.

Lee and his research associate, Karrie Bulski, are exposing blue crabs and grass shrimp to emulsified oil in sediment and then determining how this oil affects molting, or periodic shedding that allows shrimp and crabs to grow. To test this, emulsified oil is added onto sediment inside the tanks that house the crabs. The crabs are also fed squid that has been contaminated by the emulsified oil. Preliminary research results show egg and embryo production was reduced in female grass shrimp exposed to food and sediment infused with emulsified oil.

Working with Anna Walker, a pathologist at the Mercer University School of Medicine, they found that blue crabs exposed to emulsified oil showed changes in their blood cells, especially cells related to the immune system. Lee and his team speculate that the immune systems of those crabs may be compromised, making the crabs more susceptible to infection and disease.

Researchers are also testing effects of oil treated with dispersants. In the case of the Deepwater Horizon blowout, millions of gallons of chemical dispersants were sprayed over the surface and subsurface of the Gulf. These chemicals disperse the oil into micro-droplets. In this project, dispersed oil droplets are added to petri dishes containing embryos of crabs and shrimp to test their effects on development.

Lee is working with scientists at the University of Southern Mississippi to provide the outreach portion of the project, which includes working with crabbers, fishermen and others in the Gulf ecosystem to understand the long-term effects of the spill and discover ways to manage them.

“In the outreach part of the project, scientists at the University of Southern Mississippi are going to some of the affected communities and recruiting people to participate in a series of one-day workshops,” said Lee. “At these workshops, scientists are explaining the effects of the oil on crabs and shrimp.”

So far, workshops have been held in Ocean Springs, Miss. and included charter boat captains, crab and shrimp fishermen, eco-tourism operators, and even teachers and artists from Biloxi, Miss. and Bayou La Batre, Ala.

“It was very interesting,” said Lee. “From the scientific and economic standpoints, there are many aspects as to how oil is affecting these communities.”

According to Lee, one issue facing the Gulf coast communities is rumors about seafood safety are often much worse than reality. In Louisiana and parts of Mississippi, where a lot of the oil came ashore, there is a perception that people should not eat the seafood there. But, there is very little evidence of any contamination in commercial shellfish.

Lee describes the people who attended the workshops as passionate, involved and worried about their communities. “They are worried that the oil will change things, but most agree that the ecology was not destroyed and it’s not the end of a way of living,” he said. “It’s my opinion that the Gulf will recover.”

Lee and his team plan to complete their project and publish their results early next year.