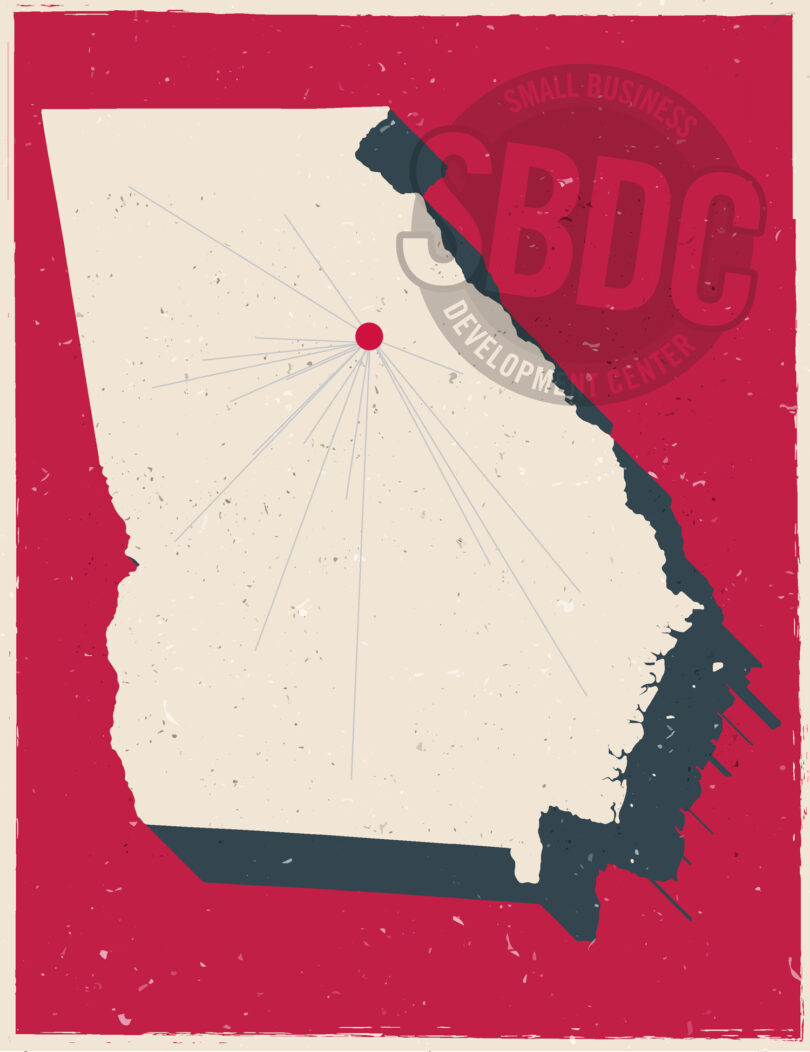 The University of Georgia's Small Business Development Center, a unit of UGA Public Service and Outreach, has 18 offices across the state that serve the needs of the state's business community. (Photo illustration by Jackie Baxter Roberts/UGA)

As businesses face uncertainty during the pandemic, UGA’s Small Business Center has been here to help.

Josie Moss may have been a latecomer to owning her own business, but she turned out to be a natural.

Over the years, the former high school teacher and principal began to appreciate the importance of early childhood education.

“If I got some of these babies earlier, I know they wouldn’t come to me with all of the issues and things that they struggle with,” she used to say about her students.

After extensive homework, Moss bought Harmony Learning Academy in Lithia Springs from a previous owner. The school serves children from infancy to age 12.

In 18 months as an entrepreneur, Moss figured out a lot. She created a business plan and a three-year budget. She found the just-right student-to-teacher ratios for the best student experience that turned a profit.

To do this, she asked a lot of questions, many of them to Todd Anduze, her consultant at the Small Business Development Center (SBDC) in Carrollton.

The SBDC, run statewide by the University of Georgia, helps small business owners and aspiring entrepreneurs through a wide range of educational services, including no-cost consulting.

But then the pandemic came to Georgia. And everything changed for Moss and small business owners across the state.

During the ongoing crisis—especially in the early months—the SBDC has been a lifeline to thousands of small businesses like Moss’s and has provided information and resources to keep them afloat. 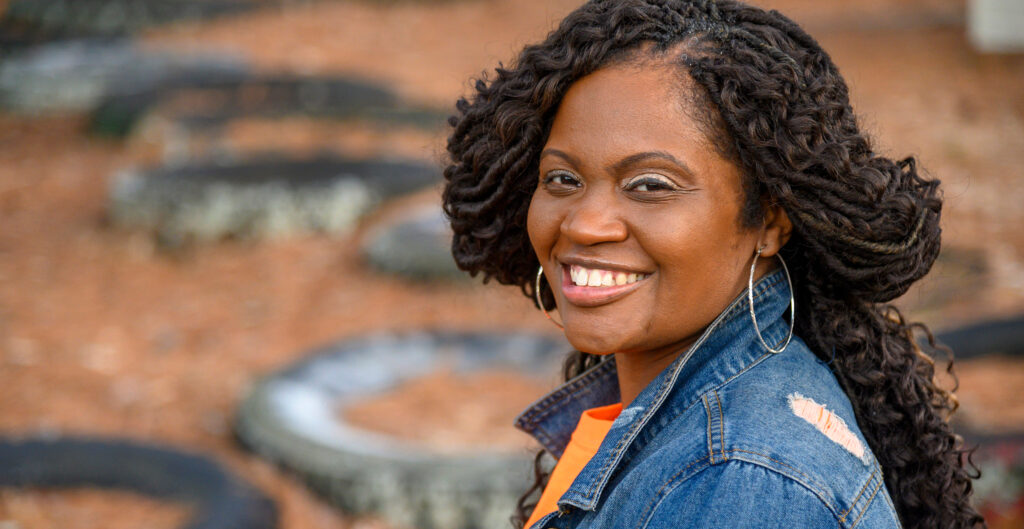 Josie Moss, owner of Harmony Learning Academy in Lithia Springs, has faced challenges during the pandemic with help from the Small Business Development Center and her consultant, Todd Anduze (Photo by Dot Paul)

The pandemic’s effects on businesses were unlike those of other economic crises.

“In a matter of a few weeks, we went from an open economy to states ordering businesses closed,” says Allan Adams AB ‘82, the statewide director of the SBDC, a unit of UGA Public Service and Outreach. “For many small firms, their revenue dropped to zero.”

Even for businesses that could stay open, it didn’t mean customers would come in. The situation was unsustainable.

“Most small firms don’t have deep financial reserves and financing options,” says Adams. “They are dependent on a steady cash flow. Most small firms are 30, 60, 90 days from going broke, even in good times.”

From the outset, Harmony Learning Academy had to close for two weeks, but that turned into an indefinite closure. The future of Moss’s school grew uncertain.

On the other side of the I-285 perimeter in Norcross, Matt McKee BBA ’07 watched his company’s sales tank by as much as 90%. McKee is CEO of the Cutting Board Company, which manufactures cutting boards for homes and restaurants.

“It definitely got scary,” he says. “You just kind of sit there watching your daily numbers and wondering what’s going to happen with the business.”

Fortunately, Harmony Learning and the Cutting Board Company had some money in reserve. But how long could these companies stay afloat without a change in strategy?

But news about how businesses could access the aid was fuzzy at first and confusing to many.

And that’s where the SBDC stepped up.

During normal times, the core of the SBDC’s work is through its consultants in the center’s 18 area offices across Georgia. Some of these offices are partnerships between UGA and other institutions. For example, in Carrollton, where Anduze works, the office is a partnership between UGA and the University of West Georgia.

Consultants’ expertise can range from financing and accounting to marketing and exports. But this spring, they all narrowed in on helping small businesses survive.

“Everyone had to focus on short-term financial management,” Adams says. “We had to turn our whole workforce on a dime, and they were doing it from home.”

And it turned into a round-the-clock affair. “Our phones just blew up at the local offices,” Adams says.

In the meantime, Moss was scrambling to keep parents updated about the school, while at the same time learning about new regulations and guidelines, all while figuring out how to keep her business from going under.

To get new information, she stayed in touch with Anduze.

Everyone was calling their bankers. We called the SBDC.” –Dave Brautigan, owner, the Cutting Board Company

No one knew precisely how the federal loans would work or how quickly businesses could get the much-needed cash.

And while many businesses were desperate for help, back at the Cutting Board, the executive team didn’t panic.

Owner Dave Brautigan had a longstanding relationship with Peter Williams, a consultant in the Macon office of the SBDC. During the first weeks of the crisis, the two frequently talked, particularly about the availability of a federal loan called the Paycheck Protection Program (PPP) that could help businesses keep their staff employed.

Brautigan was hearing from other business owners who were having trouble getting information.

“Everyone was calling their bankers. We called the SBDC,” said Brautigan. “It was hard to tell which news was fact or fiction, but Pete would respond with a level of honesty that put my mind at ease.”

Like Brautigan, Moss felt like her SBDC consultant was right with her every step of the way, especially while considering relief loans.

“We were figuring it out with each other. It was just like unwrapping the gift on Christmas day together,” she says.

Whenever Moss got a document about a loan that she didn’t quite understand, she would forward it to Anduze with a single word message, “Explain.” And Anduze would be back in touch soon with answers.

Between March and August, consultants from the SBDC helped more than 3,300 small businesses in Georgia secure $88 million in federal grants and loans.

During that period, consultants heard from thousands more who sought information but not direct assistance in applying for funding. Many tuned in to SDBC-hosted webinars about federal funding or spoke by phone with an SBDC consultant. 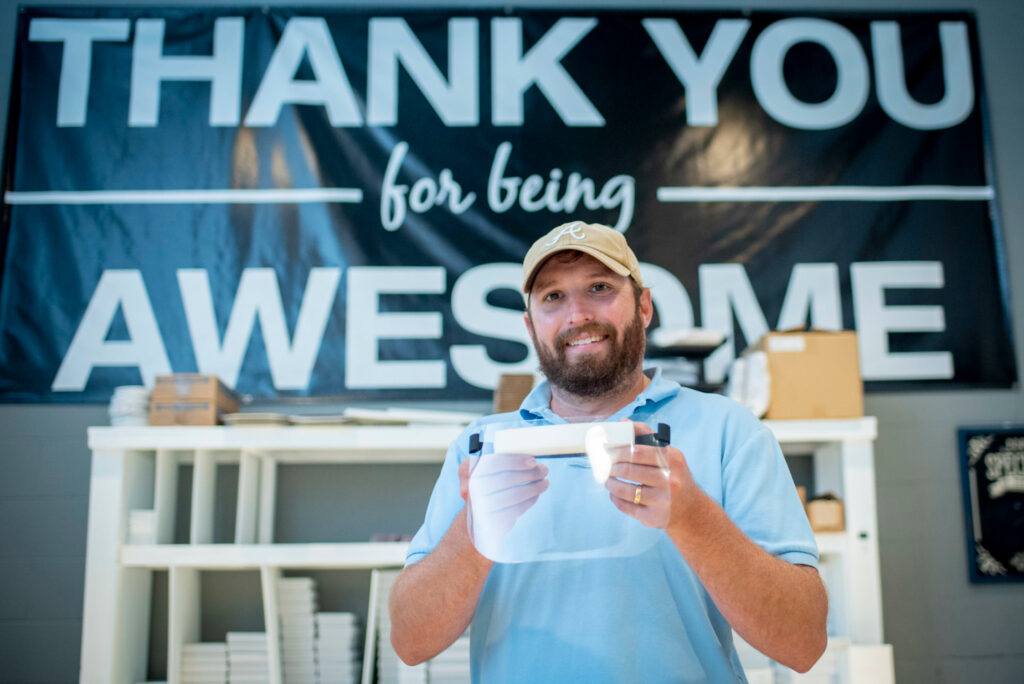 In a matter of weeks, the Norcross-based Cutting Board Company staff and CEO Matt McKee shifted production from high-end restaurant cutting boards to face masks and other pandemic-related safety equipment. (Photo by Dot Paul)

During tough times, many businesses find ways to adapt.

When the Cutting Board’s Brautigan learned about a need for face shields for frontline workers, a light bulb clicked on in his mind.

His company’s manufacturing facility had the lasers that could cut shields and other personal protective equipment. They’d just need to retool the equipment and secure the raw materials.

So, while many businesses were hunkering down and conserving cash, the Cutting Board Company doubled down and bought $20,000 worth of acrylic. They tinkered with their machines and got to work on the face shields.

Initially, their goal was to donate what they could to the community and keep their workers busy until business picked up. And they did that, but soon other firms were interested in purchasing the face shields and clear plastic barriers. So, the company was generating revenue even while cutting boards weren’t selling.

“It went from being scary to being actually a lot of fun,” McKee says. “I mean, we were up here late at night or on weekends building face shields, and all our workers bought in. It was a pretty unique time.”

Moss finally reopened in June after being closed for 10 weeks. But some parents pulled their kids out. Enrollment dropped from 65 students pre-pandemic to just 14.

Through the fall, enrollment came back up to 35 students. The school is surviving, but the budget is tight.

Moss remains in contact with Anduze. She says this year would have been much more stressful and difficult without the SBDC.

“It’s priceless,” says Moss. “Not just in the monetary sense but every other way too. It would be extremely difficult to keep my head above water without the services of Todd and all that he provides.”

For his part, Anduze says Moss is a smart, “action-oriented” business owner who is doing everything to keep her business going.

On a video chat for this story, Anduze referred to Moss as a friend, and Moss says it’s clear that he wants her business to succeed. “On the days when you’re doubting yourself, it means so much just to have someone you can email and call or send a quick text and say, ‘I need help.’”

At the end of 2020 and the beginning of this year, the SBDC again focused on informing small business about funding available through the new Economic Aid Act passed in December. Gov. Brian Kemp BSA ’87 and the SBDC launched a website and a series of webinars to provide information to Georgia small business owners.