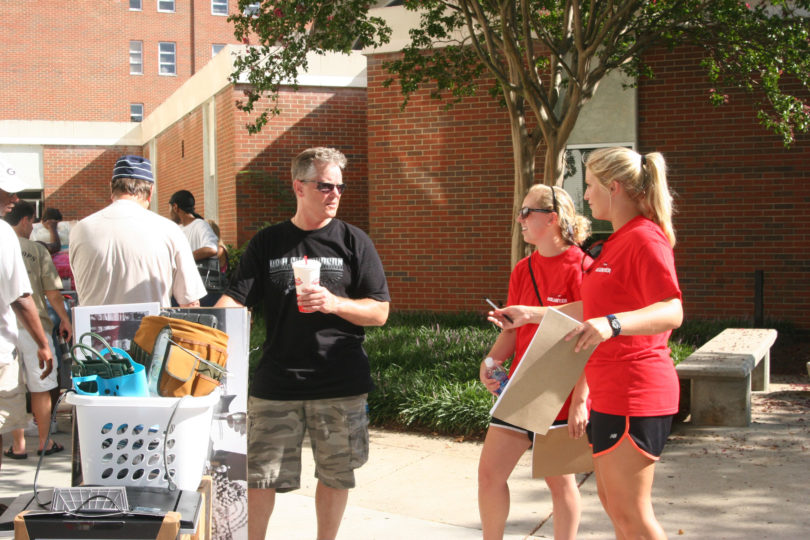 Hunker Down with Housing marks 10th year of organized move-ins

Despite the triple-digit temperatures, Pat Daugherty, vice president for student affairs, was excited to help students move into the residence halls as part of the university’s Hunker Down with Housing initiative.

Wearing her biggest smile, Daugherty told new students where they could get new room keys. She also gave directions to shopping centers and helped pick up the occasional cart of spilled dorm goods like comforters, pillows and polo shirts—all while braving the 103-degree heat.

Stationed outside Brumby Hall, Daugherty was one of approximately 300 volunteers helping out with the mass three-day move-in.

She donated her time because she wanted to welcome the new students and their parents to campus and make the transition as easy as possible. Plus, she heard it was fun.

Ed Kelly, a student affairs specialist III in University Housing, explained part of the philosophy behind Hunker Down with Housing: “We want the first face they see to be a welcoming face.”

Now in its 10th year of operation, Hunker Down with Housing was established in 1998 to ease the move-in process for new students.

Before then no effort had been made to manage move-in outside the residence halls, which meant high-density traffic, no unloading zones and confusion for the incoming freshmen and their parents, according to Shay Davis Little, director of administrative operations in University Housing.

The Move-in Planning Committee organized the Hunker Down with Housing event so that the university police department, parking services, auxiliary services and housing all worked together.

The event has even expanded to allow vendors selling dorm supplies—lofts and rugs—to park across the street, with the permission of Athens-Clarke County government. The Physical Plant provides extra dumpsters and recycle bins as well as trash removal several times during the day.

The first Hunker Down event had fewer than 100 volunteers and had a lot of “bumps in the road,” according to Little. But now, she said, “it’s amazing to see how people work together.”

This year people worked together with the help of an all-terrain vehicle, five rental golf carts and 23 walkie-talkies.

Planning for the event started as soon as last year’s was over, and included assigning all the volunteers shifts and stations. Most volunteers worked five- or 10-hour shifts for a total of 15 hours over the course of Aug. 10, 11 and 12.

From operating the elevators to handing out neon parking permits, volunteers were spread all over the campus, both inside the 20 residence halls and on the streets. The one thing the volunteers don’t do, though, is physically help families move into the residence halls.

For liability reasons, they aren’t supposed to unload cars and help move microwaves or other supplies into the rooms—the volunteers supervise and direct.
Approximately 200 of the 300 volunteers were students, who were rewarded with moving in early, lunch while on shift, a red “It’s a Dawg’s life” T-shirt, visor, water bottle and the 55 pizzas University Housing ordered for them the day before move-in started.

The effort helped to move more than 5,800 students in over the course of three days.

“They’ve got it down to a science,” Daugherty said.