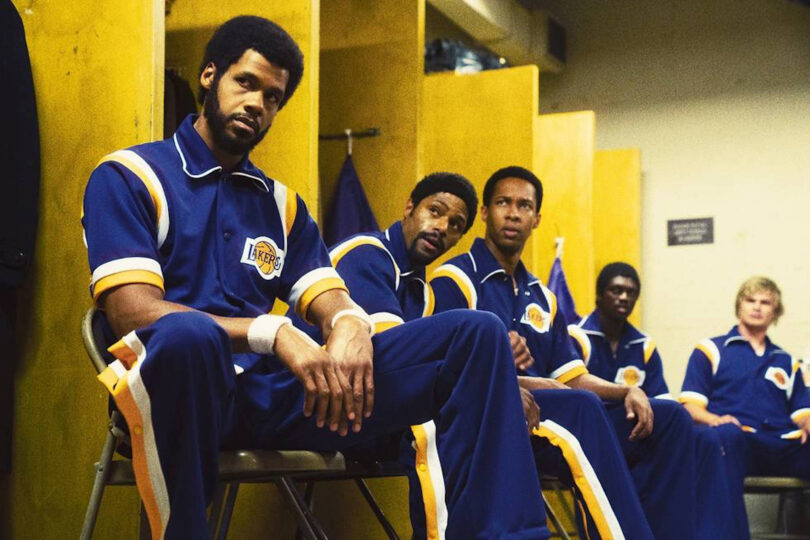 Like a skilled big man making moves in the post, Solomon Hughes’ career has been all about a well-timed pivot.

Hughes PhD ’13 has gone from playing collegiate hoops at the University of California, Berkeley, to pro-baller and member of the Harlem Globetrotters to earning a doctorate and working in academia at Stanford and Duke before scoring the acting role of a lifetime in the Emmy-nominated HBO series Winning Time.

The series, which premiered in the spring, dramatizes the story of the Showtime-era Los Angeles Lakers. In his acting debut, Hughes portrays the iconic Kareem Abdul-Jabbar (foreground), one of basketball’s all-time greats whose activism on racial equality and social justice issues helped earn him a Presidential Medal of Freedom.

The 6-foot-11 Hughes nails Abdul-Jabbar’s look (especially with the goggles on), but then he fleshes out the character with intelligence, melancholy, tenderness, and natural charisma.

To play the hoops legend convincingly, Hughes had to shake off some basketball cobwebs—he’d been away from the game for a decade—and start working on his skyhook. And in addition to building up his acting skills, Hughes says intellectual curiosity and doctoral-level research skills, which he honed at UGA’s Louise McBee Institute for Higher Education, helped him get into the character.

You could say that Hughes’ whole career had been building up to such a moment.

While serving as a captain on the California Golden Bears basketball team and leading the Pac-10 in field-goal percentage in 2001 (62.9%), Hughes earned a bachelor’s degree in sociology and then a master’s in education. He played professionally in the United States Baseball League and American Basketball Association and in Mexico before suiting up as a Harlem Globetrotter. But when Hughes became disillusioned with basketball, he returned to academia.

He talked with faculty members at Stanford, who steered him toward UGA.

“With Georgia, you’re talking about an institution that has historically been one of the premier places for exceptional athletics,” he says. “And then the Institute of Higher Education’s reputation in terms of how much they’re publishing and how influential their work has been in studying higher ed—all of those things factored in.”

Once in Athens, Hughes dove into the work. James C. Hearn, associate director of the institute and Hughes’ major professor, describes him as a “thoughtful, creative, and insightful” student.

“When he said something, people tended to pay attention,” Hearn says.

Hughes focused his research on how college athletes chose their schools. Hughes also worked directly with students as an academic counselor at UGA’s Rankin M. Smith Sr. Student-Athlete Academic Center. He came away feeling that UGA’s athletics administrators had “legitimate care and concern” for student-athletes.

“I got an inside look at how you support the student-athlete experience, really from the ground floor,” Hughes says. “While on the other side of campus at the institute, I was considering it from a policy level.” 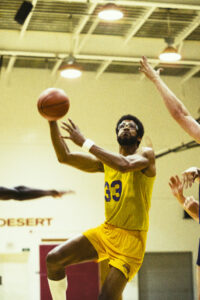 Solomon Hughes, shown here in character as Kareem Abdul-Jabbar, played college ball at the University of California-Berkeley and even suited up as a member of the Harlem Globetrotters. He earned his doctoral degree at UGA’s Louise McBee Institute for Higher Education.

While finishing his dissertation, Hughes went to work at Stanford in administrative and teaching roles. And then an intriguing opportunity popped up: a casting call looking for someone to play Kareem Abdul-Jabbar in a TV pilot.

Hughes never had formal acting training or even starred in a high school theater production, but as a child raised in Southern California, acting was always intriguing.

Plus, Hughes grew up watching the Magic and Kareem-era Lakers. His father was an admirer of Abdul-Jabbar’s game and activism, and Abdul-Jabbar’s autobiography Giant Steps was one of the first books Hughes read.

He was excited just to get an audition, and then he got the role. Working on the set of Winning Time, alongside Academy Award-winning actors (like Adrien Brody and Sally Field) and crew, was a transcendent experience for the rookie actor.

“I will always be astonished at how welcoming everybody in the cast and the crew was,” he says.

Over the summer, HBO announced it would pick up the series for another season, and Hughes says he’s “all-in” on the acting career now. But he sees this new profession as a natural continuation of his career.

“I feel like this is a form of education to have the opportunity to be part of telling stories,” he says. “It’s a classroom outside the traditional setting.”