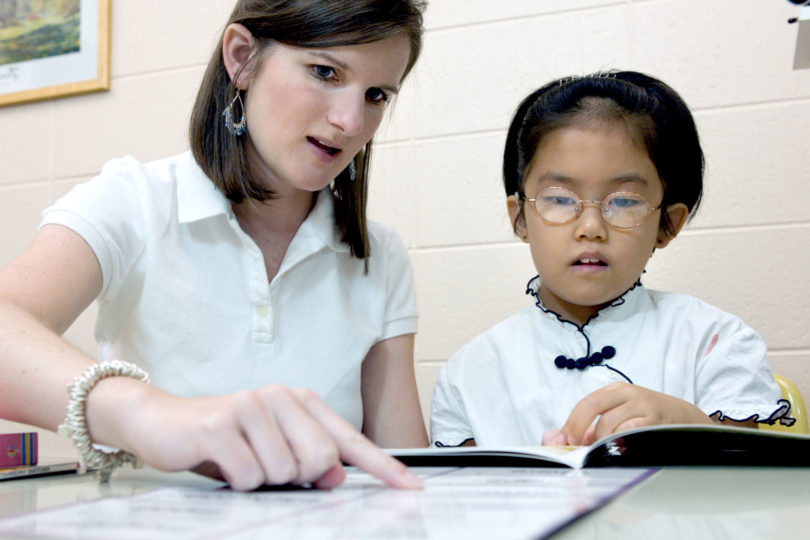 Eight-year-old Lucy Zhu looks like any other child in her classroom.

But she watches the mouths of speakers intensely, as if figuring out a puzzle. When she talks, sounds in certain words are missing, and there is a lack of voice inflection.

“This is very normal for a child who has severe to profound hearing loss in both ears,” said Jane Harvey, coordinator of the university’s Speech and Hearing Clinic, based in the College of Education.

When Lucy was 18 months old, her pediatrician was concerned that she was not speaking or babbling like most babies at that age.

“She did not say ‘mommy’ or ‘daddy’ and when we’d talk to Lucy her facial expressions were blank, like she didn’t understand,” said her father, Joe Zhu. He is working on his post doctorate in UGA’s College of Agriculture and Environmental Science after completing a doctorate in plant genetics and breeding at the University of Wisconsin in Madison.

After undergoing several auditory tests, Lucy was diagnosed as being severely to profoundly deaf in both ears.

Her parents were faced with a difficult decision.

“There are two sides in the hearing-impaired community,” said her mother, Julie Sun, “the oral camp versus the sign language camp. . . . We want our daughter to be independent one day, not having to rely on translators in class or feel that she only has one community with whom she can communicate.”

Zhu’s academic career path brought his family to Athens in 2002. In June 2003, after six months of therapy at the Speech and Hearing Clinic, Sun and Zhu decided that Lucy would undergo cochlear implant surgery in her left ear, continuing to rely on a hearing aid in her right ear. Only in extreme situations would bilateral cochlear implants be permitted, due to limited research on the long-term effects of the bilateral procedure.

“A cochlear implant is totally different than a hearing aid,” explained Holly Kaplan, a clinical audiologist at the clinic who has worked with the family since their arrival in Athens. “A hearing aid amplifies sound whereas the cochlear implant compensates for damaged parts of the inner ear, electrifying sounds and sending them to the brain.”

The combination of the cochlear implant, hearing aid and continuous therapy has paid off for the little girl. By the end of first grade, Lucy placed first in her class in math, second in reading and third in spelling, and has qualified for her school’s gifted program. Kaplan and Harvey have also monitored her social skills.

“She initiates conversations with the therapist now, which she never did before. . . that’s huge,” said Harvey.

“Julie stopped me in the hall one day and told me that Lucy had made a friend on her own,” said Kaplan. “It is these things that severely hearing-impaired children have to be taught. These are the stories that enrich our jobs and lives.”