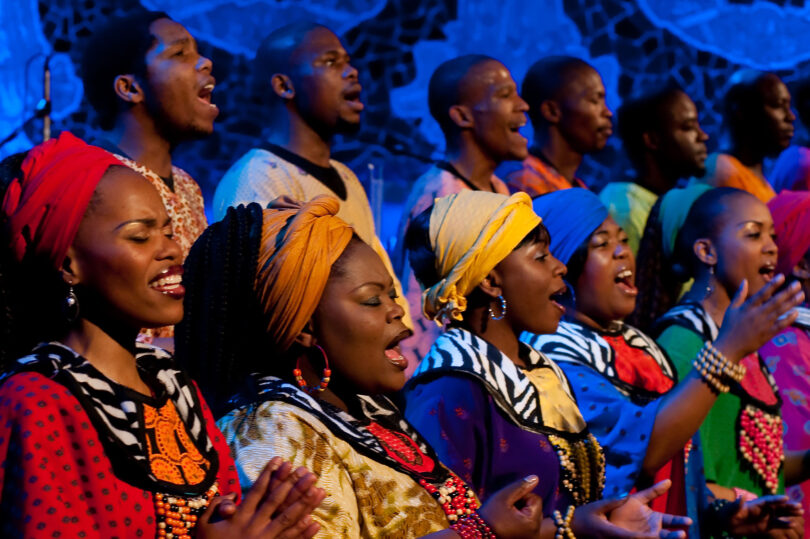 The South African Soweto Gospel Choir appears in Hodgson Concert Hall on Nov. 15 at 7:30 p.m. with a program titled “Hope: It’s been a Long Time Coming,” which traces both the Black American struggle for civil rights and the fight against apartheid.

This all-new concert by the three-time Grammy-winning choir opens with a rousing program of South African freedom songs that inspired their Rainbow Nation. Then the choir’s uplifting performance moves to the United States with beautiful renditions of the music of the civil rights movement, including works by legendary artists James Brown, Otis Redding, Curtis Mayfield and Aretha Franklin.

Hailing from Soweto (SOuth WEst TOwnship), a township outside of Johannesburg and home of Nelson Mandela and South Africa’s democratic movement, the Soweto Gospel Choir continues to inspire audiences around the world with their powerful blend of African gospel, freedom songs and international classics.

Soweto Gospel Choir was formed in 2003 at the end of the apartheid era and during South Africa’s inspiring return to democracy. Taking part in some of the major historical events in the newly democratic South Africa, Soweto Gospel Choir is proud to have performed on many occasions for the father of their nation, former President Nelson Mandela, and at his state funeral in South Africa and at the subsequent commemorative service at Westminster Abbey in London. They were similarly invited to perform at the funeral service for the late president’s first wife, Winnie Mandela. The choir acts as ambassadors for the Nelson Mandela Foundation.

In its Athens debut, the choir is also giving a Piedmont Athens Regional Performance for Young People in the morning before the UGA Presents concert and a workshop that is free and open to the public in the Performing Arts Center’s Ramsey Hall from 12:30-1:45 p.m. The evening concert will be preceded by a free pre-concert talk in Ramsey Hall from 6:30-7 p.m.

The Soweto Gospel Choir is just one of the international groups on the UGA Presents calendar. On Jan. 23, the Lviv National Philharmonic Orchestra of Ukraine brings Dvorak’s “New World” Symphony to Athens. Scottish folk group Breabach comes to Hodgson Concert Hall on Feb. 24. And Yamato: The Drummers of Japan will make a UGA Presents debut March 24.