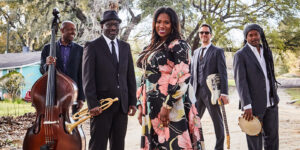 Ranky Tanky, a band of native South Carolinians, mixes Gullah culture and Lowcountry traditions with large doses of jazz, gospel, funk and R&B. Multi-instrumentalist Flemons was a founding member of the Carolina Chocolate Drops; he won a Grammy with that group and earned additional nominations for solo albums.

Ranky Tanky (a Gullah phrase for “get funky”) is five lifelong friends from Charleston, South Carolina, who have established themselves as passionate global ambassadors for their local culture and community. They strive to help preserve the traditions, originated by African Americans in the coastal South during the period of slavery, that are kept alive through the present day. The band has been featured on NPR’s Fresh Air, The Today Show, PBS NewsHour and The Late Show with Stephen Colbert. Ranky Tanky was honored to be featured artists in President Joe Biden’s pre-inaugural event, We the People. 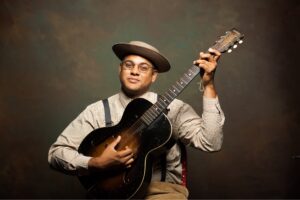 Southern Journey: An Afro-Americana Celebration! is the first in a series of UGA Presents performances celebrating Black excellence this season. Others include the Jazz at Lincoln Center Orchestra with Wynton Marsalis in Big Band Holidays (Dec. 7 and 8) and the Performing Arts Center’s 25th anniversary gala with Broadway, TV and film star Audra McDonald (April 24).

This performance is funded in part by a grant from South Arts in partnership with the National Endowment for the Arts and the Georgia Council for the Arts. It is also supported by Sandra Strother Hudson and Cecil C. Hudson, M.D., and is part of the UGA Spotlight on the Arts festival.

For a complete list of UGA Presents performances, visit https://pac.uga.edu/organizer/uga-presents.

For information about the Performing Arts Center’s COVID-19 protocols, visit pac.uga.edu/safety-first. Flexible ticketing will be in place for all performances occurring through December 2021. Patrons may exchange tickets for another performance (including those in spring 2022) or receive a full refund until noon on the day of the performance, if occurring on a weekday, or by Friday at 5 p.m. if occurring on a weekend.