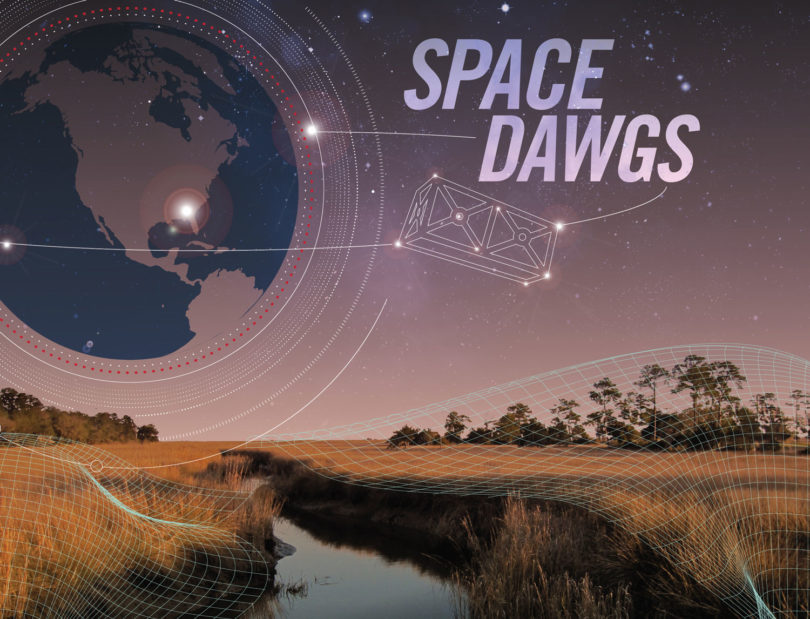 The Small Satellite Research Lab is launching UGA into space and the first of two satellites is scheduled to launch this fall.

This story begins with a bold but simple challenge: to send something into space.

That’s what a handful of entrepreneurial, tech-savvy University of Georgia students set out to do four years ago, and their work has launched a campus initiative to push the boundaries of space systems development.

Self-described “geeks” Caleb Adams BS ’18 and Hollis Neel BS ’17 were two of the handful of friends drawn together by their knack for tackling tech and software conundrums.

“I was looking for the most difficult thing I could find and throwing myself at it,” Neel says. “That’s a theme you’ll find with a lot of us: We really enjoy a challenge.”

Four of the students had recently created a user-friendly, smartphone-controlled telescope and launched a company to sell their product. Then they decided that instead of just looking up into outer space, they wanted to send a gadget into it.

They found an opportunity with cube satellites, or CubeSats, a class of miniature spacecraft shaping the next stage of space technology. CubeSats are compact and fairly inexpensive, at least compared to large communications and research satellites. Because they’re small and cheap, and because there have been huge strides in fitting high-powered computers into tiny devices, CubeSats are tissue box-sized vessels for innovation.

Captivated by the possibility, Adams—sometimes referred to as “the ringleader” of the group—wanted to build one. He remembers thinking, “How hard can it be?”

Maybe it’s for the best that they had no idea what they were getting into. Competition for CubeSats is fierce, with many universities vying for the limited approval and academic funding available to send a small satellite into space. And despite their small size—arguably because of it—they’re hugely complex to build and operate. But the students had the necessary ingredients to get the project started: a big idea plus the drive and brainpower to see it through. What they lacked was the guidance and expertise to bring it all together. 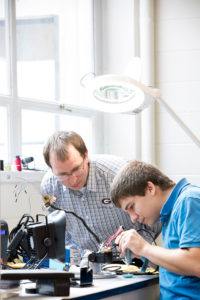 The students dove in and began creating a Kickstarter fund to build their CubeSat. But they soon learned it’s not easy to get money to build a spacecraft just for the heck of it. They needed a purpose, a mission, for their satellite. Adams started emailing faculty across campus looking for help. At another university—say one with an aeronautics program—this story might have taken a different direction. But instead of finding someone to tell them how to build a spacecraft, they found faculty who could give them a reason to build one.

Adams connected with former NASA researcher Marshall Shepherd, now the UGA Athletic Association Distinguished Professor of Geography and Atmospheric Sciences. As it turned out, faculty in the Franklin College of Arts and Sciences geography department had already been exploring CubeSats to improve research capabilities.

In addition to gathering data on the ground, the researchers verify their findings with visual information gleaned from large research satellites operated by NASA and the European Space Agency.  While that sounds impressive, it comes with limitations, Mishra says. Those satellites have set overpass times, usually going over Sapelo Island between 10 a.m. and noon just a few times a month.

“That’s a big data gap,” Mishra says. Plus, large satellite sensors are intended for broad regional mapping. “Their bandwidth is fixed. So they don’t work on certain applications.” Applications such as identifying bacteria in water, which indicate dangerous algae blooms.

He hopes a new satellite, specifically designed and deployed for their research, could give them a clearer picture of coastal health.

The faculty had a science mission but needed someone to build a satellite. The students wanted to build a CubeSat but needed a mission. It was a perfect match. 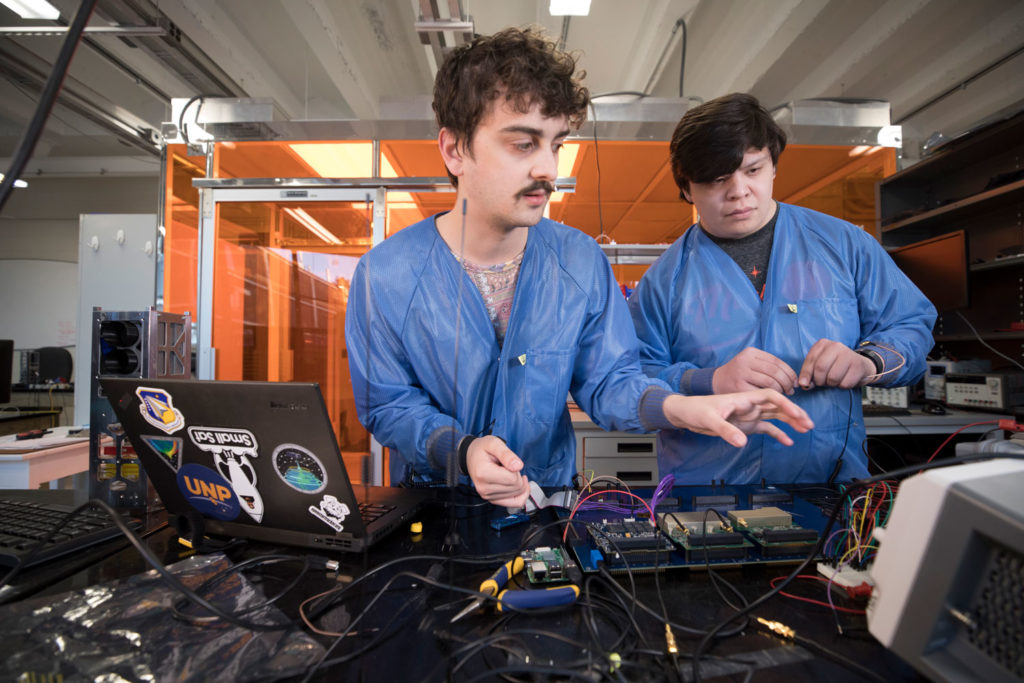 The collaboration gave rise to the Small Satellite Research Laboratory, aimed to make UGA a leader in small spacecraft-driven research and development. The lab is staffed by about 50 students, ranging from STEM majors to those in business and the arts. They’re guided by an interdisciplinary team of faculty in geography, engineering, math, physics, chemistry, and oceanography.

To get going, the team needed more than big ideas. They needed funding and a way to launch the CubeSat into space.

So they got to work, applying to NASA’s Undergraduate Student Instrument Project.

UGA alumnus Roger Hunter BS ’78, who was the program manager for NASA’s Kepler Mission to explore the galaxy for other Earth-like planets, now manages the Small Spacecraft Technology Program at NASA’s Ames Research Center in Silicon Valley. The program wants to empower college students to push the boundaries of space technology.

“NASA depends on innovation that gets spurred in academia as well as commercial industry,” Hunter explains. “That’s how you get some great ideas.”

To write their proposal, UGA faculty focused on the scientific mission (monitoring coastal health), and the students threw themselves into designing the satellites and payload.

The students relied on long nights of work, complete with video game breaks, gallons of coffee, and calls seeking technical advice from aeronautics and optics experts at NASA and universities as far off as Norway and the Netherlands.

Cotten, who became the faculty lab manager, says the students have an unconventional work style. One that includes naming their lab’s computers after Taco Bell menu items (Gordita Supreme and Nacho Chicken Chalupa, for instance) and holding strategy sessions while playing Super Nintendo. But their process yields results and the kind of creativity that generates innovation.

“They think outside the box,” Cotten says. “Our job is corralling them to be focused on the task at hand and to not go too far outside that box.”

They sent a proposal to NASA for a SPOC (SPectral Ocean Color) Satellite. The payload would have optics capable of zooming in on coastal areas and then splitting the light on the water or wetland surface to determine dominant colors. Those colors reveal the chemical and molecular makeup of the ocean and wetland surface and signs of coastal health. Best of all, this satellite could be navigated by a mission control station built on campus.

The proposal won funding to build SPOC and secured a place on a rocket to launch it.

With that first funding victory under their belt, the students entered a second, highly competitive grant program, the Air Force Research Laboratory’s University Nanosatellite Program. Now, the lab was aiming to push the boundaries and build an even more complex satellite. To get approval, they would go up against some of the nation’s top established aerospace programs.

Their second satellite design was for MOCI (pronounced mo-chee), which stands for Multi-view Onboard Computational Imager. MOCI is designed to take images from low-orbit and then compute data before sending it back to ground control. It’s an innovative approach; typically, NASA missions send raw data back to Earth to be processed. But Hunter says the space agency is looking at this satellite’s approach for future missions.

During the grant approval process, the Air Force lay down tight deadlines and reviews for the lab to make sure progress was made. According to students Neel and Adams, even the Air Force researchers lived up to the military’s reputation for rigor. At an early review, they found flaw after flaw in the lab’s satellite design.

“They ripped it apart,” Adams says. So, the students resolved to dig in and work even more meticulously. From then on, the lab hit their marks, and last January the team was one of only 1o national finalists for the grant.

They had put in two years of work to get to this point and were competing against the likes of MIT and the U.S. Naval Academy. UGA was the only finalist to come from a school without an aerospace program or previous satellite capabilities. It was one of those times when just making it to the finals would have been a victory.

Instead, the lab was one of two programs, along with the University of Colorado, selected by the Air Force to build and launch their satellites. 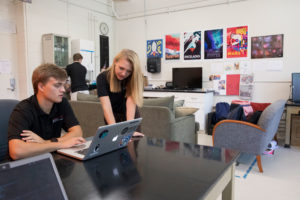 Students can be found working in the lab, located on the bottom floor of the Physics Building, at all hours of the day and night. (Photo by Dorothy Kozlowski/UGA)

SPOC is slated for launch in October, and MOCI is schedule for 2020.  In just three years, UGA’s involvement with space-systems development has transformed from big idea into reality. Even the experts are impressed.

“These students are getting a lot of attention,” says NASA’s Hunter, who as a member of the Franklin College Advisory Board has visited the lab several times. “I’m astonished by how far and how fast they’ve come in a short amount of time. The key will be: what comes next.”

The next two challenges will be the successful deployment of their first satellites, then generating new ideas to keep the lab going.

With the promise of an unparalleled experience, the lab continues to attract new talent on campus. This fall, hundreds of students applied for 10 open positions. Only 5 percent were selected.

And the lab’s leadership is beginning to think about their next idea for a satellite (possibly using artificial intelligence to enhance spacecraft functionality in low orbit) and hoping to help UGA researchers tackle the next grand challenge with data from a small satellite.

“We need to figure out a way to sustain this momentum, to bring in bigger projects, to compete nationwide, and to be known as a center that produces good satellites for strong scientific applications,” he says.

While some of the lab’s founders have graduated and moved on to tech and aeronautics jobs, Neel and Adams chose to stay behind to see the first two satellites through to completion. Both are working on advanced degrees at UGA, Neel in geography and Adams in computer science.

The lab is working on building the engineering model for SPOC before they begin to put together the real thing in February. It will be a slow and arduous process. The failure rate for small satellites is 67 percent. Adams and Neel have no interest in being part of that statistic.

“We’ve done so much planning and design, I’m looking forward to the implementation,” says Adams.

The goal has become bigger than just sending “something” into space. Adams says the students are inspired by the possibilities this work can support.

“At the end of the day,” he says, “our goal is to support our faculty and create tools that help them do science.”