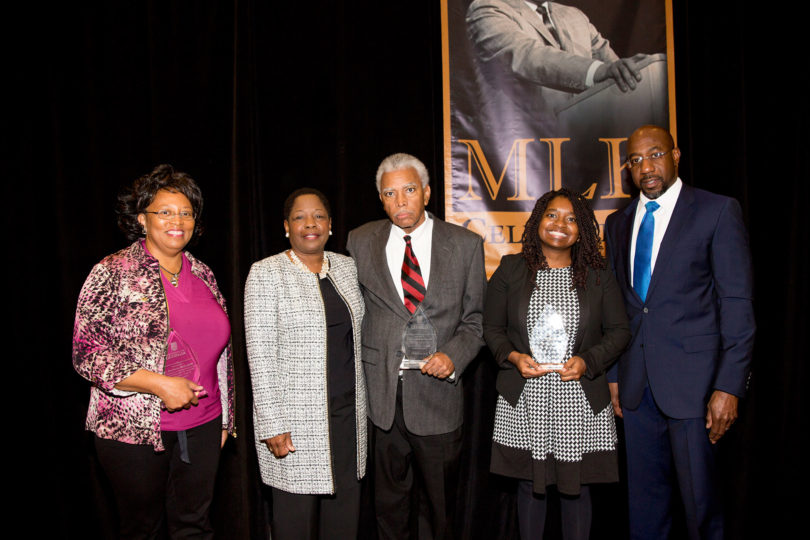 “Dr. King loved Schubert’s unfinished symphony. It is a classic, but unlike most symphonies, it only has two movements,” Warnock said. “If you think about it, all of our lives are like an unfinished symphony. We die with a project unfinished. While we celebrate his work, let us not cash in the dream for
sentimental memories. He understood that this work builds one block upon another.”

The breakfast commemorates the life of the late civil rights leader and honors the exemplary community service work of individuals in Athens and the university community. The event, held at the Grand Hall of the Tate Student Center, is sponsored by UGA, the Athens-Clarke County Unified Government and the Clarke County School District.

Warnock told the estimated 600 people in attendance that “we must become allergic to bigotry.”

He also reiterated the importance of investing in people, particularly children, calling them “the most important resource we could ever have.”

At the breakfast, UGA also recognized four people who are taking steps to promote equality and justice.

Elizabeth Louis, a doctoral candidate in psychology; Barbara McCaskill, professor of English and co-director of the Civil Rights Digital Library Initiative; and Fred O. Smith and Lee E. Zimmerman Smith, co-founders of the Creative Visions Foundation, received the President’s Fulfilling the Dream Award for their efforts to make King’s dream of equality and justice a reality.

Louis works as a graduate assistant in UGA’s Office of Institutional Diversity. Her research interests include ethnic minority and immigrant mental health and trauma; the influence of culture, religion and spirituality in coping with traumatic experiences; and disaster mental health and humanitarian psychosocial interventions.

McCaskill, who has been on the UGA faculty for 25 years, helped develop and implement the English department’s Multicultural American literature curriculum. She has published four books and scores of essays and book chapters on African-American literature and literary subjects. In the Athens community, she has taught classes about the literature and film of the civil rights movement for UGA’s Osher Lifelong Learning Institute.

The Smiths have been active in many organizations. In 1989, they started the Creative Visions Foundation, a community-based nonprofit organization that provided after-school, weekend and summer educational enrichment to Athens-area youth. In 2012, they created the first Athens Area Black History Bowl, aimed at connecting youth to their history through questions specifically about local and regional African-American history.

The Freedom Breakfast and the President’s Fulfilling the Dream Awards are coordinated by the UGA Office of Institutional Diversity.