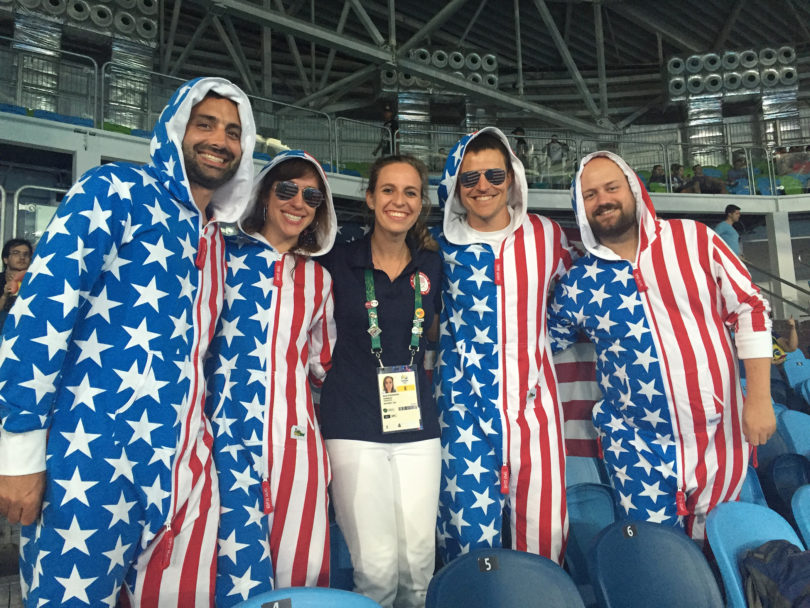 As Grady Sports Media students, Nicole Chrzanowski and Jaylon Thompson have learned to withstand pressure, stress and other challenges that come with reporting on tight deadlines. But those skills were put to the ultimate test this summer when they covered the 2016 Olympic Games in Rio de Janeiro, Brazil.

The students were selected by the U.S. Olympic Committee to report on the Games for the USOC’s various information channels, including its website, TeamUSA.org.

Over three weeks, each produced more than a dozen stories in addition to breaking news alerts and short features on athletes’ press conferences. It was a fast-paced, heart-racing experience that both describe as one of the most thrilling of their young lives.

“To be able to cover different sports on [the] highest level is something that so many journalists aspire to do, and I was able to do that as only a student,” said Chrzanowski.

Vicki Michaelis, who holds the John Huland Carmical Chair in Sports Journalism and Society and is director of Grady Sports, arranged for the opportunity with the USOC and supervised the students in Rio. Michaelis was the lead Olympics reporter for USA Today from 2000-2012. The Rio Games were the ninth Olympics she has covered.

“To see the Olympics through the students’ eyes was to see it as if for the first time again,” Michaelis said.

“I’m extremely proud of them because they both handled themselves as true professionals and just embraced it,” she also said. “Every day at the Olympics is a totally new learning experience—having to deal with all the various obstacles that might be thrown at you, having to get through them and get the story done.”

Throughout his experience, Thompson said he relied on skills he’s acquired through Grady Sports.

“Deadline writing was the biggest help as I wasn’t fazed by the pressure of turning a story in at the last possible minute,” he said. “An example of this was at track and field. I had to write two stories at one time and relied on my time management to get both done before my (midnight) deadline. It was a challenge, but I felt my professors helped me be prepared for the role.”

“I would not have been able to withstand the pressure or deadlines had it not been for taking [Grady Sports] classes, as it is important to [the professors] that we have real-life and applicable experience, in class,” said Chrzanowski.

One of the biggest challenges Chrzanowski faced was having to quickly become familiar with certain sports.

“I learned equestrian in about 30 minutes because we had a surprise medal come up,” she said. “In those situations, I just had to tell myself, ‘You don’t have to be the expert on the information; you just have to have a basic understanding and know what your resources are.’ I also read bios to get a background on the athletes I was writing about, but the biggest challenge was the sport as a whole.”

Chrzanowski said she most enjoyed watching and covering sports she wouldn’t have otherwise.

“I don’t know that I would ever be able to experience a BMX race or fencing had I not been at the Olympics,” she said.

“My other favorite part was watching Michael Phelps’ final race,” Chrzanowski added. “I grew up watching him and following swimming year round, so to see the conclusion of his illustrious career was really special. It was one of those moments where you knew you were watching history.”

Michaelis, who has been on the scene for all of Phelps’ Olympic medal races, couldn’t resist donning her reporter hat once again, writing two stories for TeamUSA.org: one when Phelps broke an ancient Olympic record and another after he clinched his 23rd gold medal.

“When you can say that you saw the greatest Olympian of all time win every single one of those medals—and it’s a lot of them—that’s a special thing that journalism gave me,” Michaelis said. “It was very fulfilling to be able to put that all in words, what I was feeling.”

Aside from being close to the athletes, the students were elbow-to-elbow with seasoned journalists as members of the press corps.

“I was able to network with so many contemporaries in the journalism field,” Thompson said. “I met people who I grew up watching on television or reading as a kid. To meet them and get advice from them was great for my confidence. I truly feel that wherever I end up, this experience will help me on my journey.”