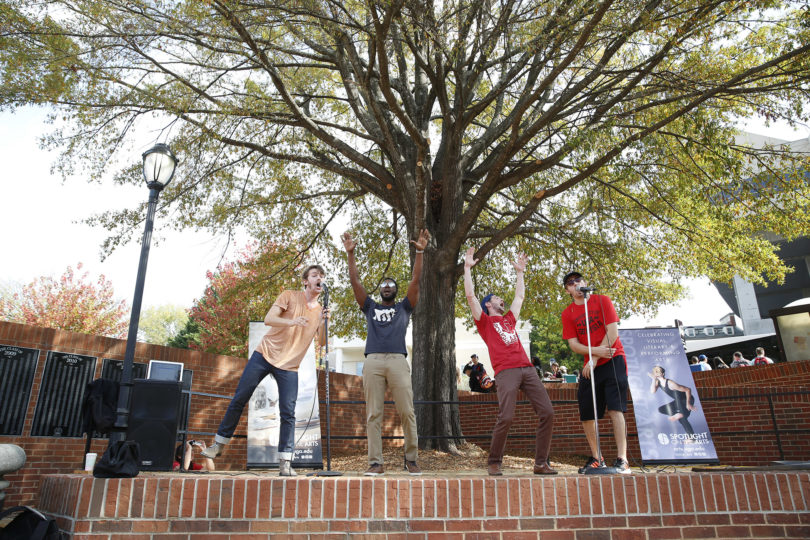 Athens, Ga. – More than 23,000 people attended the University of Georgia’s Spotlight on the Arts festival this November, setting an attendance record for the fifth straight year.

Held Nov. 2-13, the festival featured more than 100 events and exhibitions and engaged a total of 23,211 people in the visual, literary and performing arts. Events featured special guests as well as hundreds of student artists, musicians, writers and performers, including more than 200 who took part in an Opening Celebration kaleidoscope performance.

“The success of Spotlight on the Arts underscores just how important the arts are to the cultural and intellectual vitality of our university and state,” said Pamela Whitten, senior vice president for academic affairs and provost. “I am so grateful to the members of the UGA Arts Council for organizing such an extraordinary festival.”

For the first time in the festival’s five-year history, the UGA Arts Council held a Spotlight on the Arts Family Day. More than 1,000 children and adults participated in the festivities on Nov. 5, which included dramatic and musical performances, art activities, dance classes, writing workshops and a chance to interact with musical instruments.

The 2016 festival also featured performances from the University Theatre, Hugh Hodgson School of Music and department of dance, a Shakespeare symposium, a roundtable on arts and the environment, a popular open house at the Lamar Dodd School of Art and exhibitions at the art school, the Georgia Museum of Art, State Botanical Garden of Georgia, Grady College of Journalism and Mass Communication and College of Environment and Design.

Special guests included world-renowned music producer Jacknife Lee, the Atlanta Symphony Orchestra, the Chamber Music Society of Lincoln Center, Newfoundland folk band the Dardanelles and several visiting scholars and writers, including Roy Blount Jr., who was inducted into the Georgia Writers Hall of Fame. The festival also included the third annual 4 minutes, 33 seconds: Spotlight on Scholarship in the Arts competition, a signature Arts Council event where students present their scholarship in the arts in oral or poster form and compete for prizes.

“This was another wonderful year for the festival,” said Russ Mumper, chair of the UGA Arts Council and vice provost at UGA. “The council is so pleased to have organized a festival aligned with its mission to foster an awareness and appreciation of the arts and a campus environment conducive to artistic innovation.”

The University of Georgia held its first Spotlight on the Arts festival, which reached an audience of 14,788, in 2012.

Planning is underway for the 2017 Spotlight on the Arts festival, and information about arts events year-round can be found at www.arts.uga.edu or by following UGA Arts on Twitter, Instagram or Facebook.