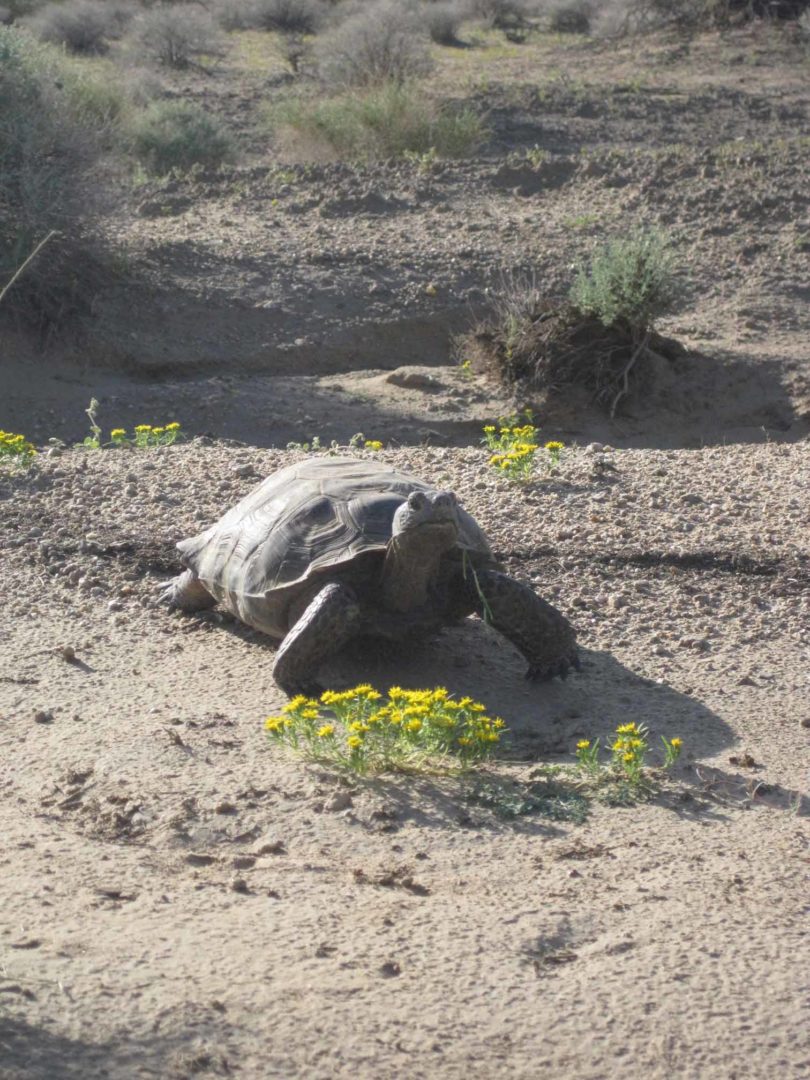 The 67,300-square-foot facility allows SREL scientists Tracey Tuberville and Kurt Buhlmann to collaborate with Brian Todd, an assistant professor at the University of California, Davis and SREL alumnus, in conducting groundbreaking research to give the local desert tortoise population a head start.

The team began recovery efforts in 2011 after being awarded the Chevron-funded project. Constructed by Chevron on land previously owned by Molycorp Inc., it is the first desert tortoise research facility located outside of a military installation.

The team’s conservation efforts are intended to increase the survival rate of the local population of the species, Tuberville said. The research is not considered a means of reversing the decline of the species, listed as threatened since 1999, but to help recover populations where threats to adults have been mitigated.

“We cannot substitute the loss of adults, but we can give a boost to recovering populations and learn a lot about juveniles through the long-term evaluation process,” Tuberville said. “The facility is unique in that it is long term and in the location of the species we want to recover.”

The LEED-certified laboratory at the facility also provides the functionality to conduct research and provide care for the tortoises both indoors and outdoors.

The research involves an experimental component that allows the team to compare juveniles raised for short periods in captivity with those released as new hatchlings in the nearby wild.
Cohorts of hatchlings are raised in the facility’s predator-proof holding pens. This controlled environment provides supplemental watering and vegetation. A segment of the cohort is eventually released, tracked and monitored for response to natural conditions in the desert, including growth, movement patterns and survival rate.

To date, the researchers have successfully raised 185 hatchlings to juvenile stage in the facility, of which 46 have been released into the wild.

Jacob Daly, a graduate student in UGA’s Warnell School of Forestry, recently joined the research team. Along with two graduate students from UC Davis, he will compare the feeding patterns of desert tortoises kept in captivity with those living in the wild.

Although the facility opened in 2012, the Sept. 4 dedication ceremony fell on the heels of the recent transfer of ownership to the National Park Service. The National Park Trust, a nonprofit organization, was serving as interim steward. The Ivanpah Desert Tortoise Research Facility is located in the eastern portion of the Mojave Desert, about 55 miles south of Las Vegas, Nevada.

Tuberville and Buhlmann bring more than 20 years of extensive expertise to the project from U.S. Department of Energy funded research on reptiles at SRS and in the southeastern United States. Their work includes re-establishing a gopher tortoise population on the site.