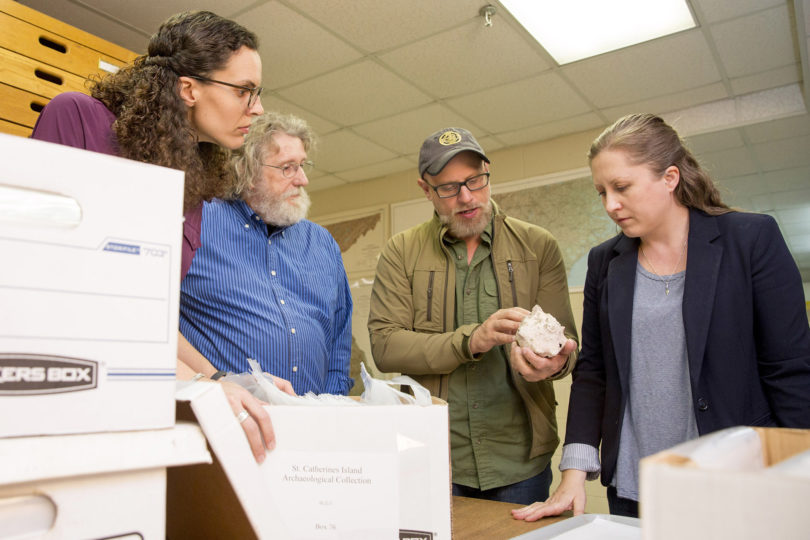 Athens, Ga. – The University of Georgia Laboratory of Archaeology has received an extensive archaeological collection that includes artifacts and other paleoenvironmental materials recovered by the American Museum of Natural History during a decade of excavation led by David Hurst Thomas on St. Catherines Island, Georgia.

The materials are accompanied by a comprehensive digital database that contains relevant field notes, photographs, catalogs, reports and publications that relate to the excavations conducted on the island from 2005 to 2015. The university will also receive any future artifacts excavated on the island.

“This is one of the most important archaeological collections to come to the Laboratory of Archaeology since its founding in 1947,” says Mark Williams, director of the UGA Laboratory of Archaeology. “It will enhance our already extensive coastal collection and allow current and future researchers to continue answering questions concerning the role that islands and coastal regions played in the development of human societies over time.”

The excavations for the St. Catherines Island Collection were sponsored by the Edward John Noble and St. Catherine’s Island foundations.

St. Catherines Island, located along the Georgia coast, is a culturally and ecologically unique barrier island that contains diverse evidence of human occupation that spans more than 4,000 years. It is home to the most completely excavated Spanish mission in the Southeast; archaeological work on the island has been taking place for more than 42 years.

According to Victor Thompson, director of the UGA Center for Archaeological Sciences, the Edward John Noble and St. Catherine’s Island foundations selected the UGA Laboratory of Archaeology to steward and care for this collection in perpetuity because of UGA’s commitment to Georgia archaeology, as well as the lab’s role on St. Catherines Island since the late 1960s. In addition, the lab’s integrated curation, teaching and research mission, combined with its resources, facilities and expert faculty and staff, led to its selection.

“The fact that these two foundations and the American Museum of Natural History have entrusted the University of Georgia with this world-class collection illustrates the lab’s expertise and commitment to enhancing our understanding of Georgia’s history,” says Alan Dorsey, dean of the Franklin College of Arts and Sciences. “The lab’s commitment to preservation and research make it one of the Southeast’s leading archaeological institutions.”

The transfer of the St. Catherines Island Collection began Monday when the first portion of the collection arrived; 170 boxes of materials were driven from New York City to Athens and unpacked by UGA faculty, staff and students alongside American Museum of Natural History staff. The collection is valued at just under $14 million, based on precedents set forth in the Archaeological Resources Protection Act of 1979 and conventional practice in the field of natural history and North American archaeology. This valuation takes into account the costs of excavation and curation, but the true value of the St. Catherines Island Collection lies in its potential to inform about Georgia’s Native American and early Colonial history.

The collection will be housed in the lab’s current facility on Riverbend Road in Athens until the lab relocates to a larger facility later in the year that will accommodate its growing curation needs. The collection will not be viewable to the public at this time, but will be accessible to UGA students and researchers, as well as researchers from around the world who are interested in studying this important collection.

The UGA Laboratory of Archaeology participates in archaeological research throughout the state, including St. Catherines Island. Its mission is to preserve and curate archaeological collections and records and to facilitate research and training for archaeology students and professionals. The Laboratory of Archaeology’s ongoing service to the state has led to the production of significant scholarly works that have shaped the understanding of archaeology in the southeastern U.S.

UGA Laboratory of Archaeology
Established in 1947, the UGA Laboratory of Archaeology in the Franklin College of Arts and Sciences is the largest archaeological research and collections facility in Georgia that meets federal standards (36CFR79 and Antiquities Act of 1906) for archaeological curation. The laboratory is one of the country’s premier institutions for the archaeology of the American Southeast. For more information, see https://archaeology.uga.edu/archlab.