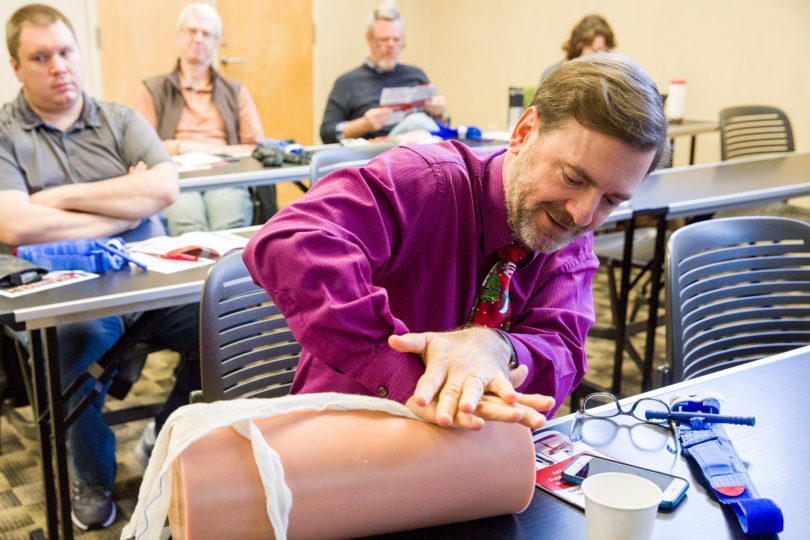 Since the Office of Emergency Preparedness started Stop the Bleed training, more than 400 UGA faculty, staff and students have taken the interactive class. (Photo by Dorothy Kozlowski)

When Keith Thalhamer saw a co-worker miss a step and fall down the grand staircase at the Georgia Museum of Art, his Stop the Bleed training kicked in.

Thalhamer, the director of security and facilities for the museum, had taken the training class offered by the Office of Emergency Preparedness with 18 of his colleagues.

After the fall, Thalhamer’s co-worker—who did not lose consciousness—was asking for a first-aid kit when Thalhamer instead used pressure bandages in the museum’s Stop the Bleed kit to treat the severe gash on his head.

In October 2015, the Stop the Bleed national program was launched to encourage bystanders to assist in a bleeding emergency before professional help arrives. The university’s Office of Emergency Preparedness started the program at UGA in summer 2016.

“We’ve been one of the leaders in higher education in implementing this program in a real comprehensive manner,” said Steve Harris, director of the Office of Emergency Preparedness. “OEP receives frequent requests for information on UGA’s Stop the Bleed program from other institutions of higher education, including recent requests from Virginia Tech, the University of Texas and the University of Connecticut.”

The leading cause of death for Americans younger than age 46 is trauma, according to a 2016 study by the National Academies of Sciences, Engineering and Medicine. The study also found that trauma cost approximately $670 billion in medical care expenses and lost
productivity in 2013. As many as 20 percent of the 147,790 U.S. trauma deaths in 2014 could have been prevented.

Other studies have been conducted to determine why bystanders do not intervene in an emergency. Researchers found that a small percentage of citizens will not intervene because they are scared of liability issues or of not having adequate training or the right equipment.

“We’re training to change that mindset,” Harris said. “By providing these kits in all the Automated External Defibrillator cabinets on campus and doing the training, people have the equipment and training, and they know they’re protected under Georgia’s Good Samaritan laws. They can help potentially save someone’s life.”

The Stop the Bleed training and equipment is based on military, law enforcement and first responder’s usage in helping in trauma-related incidents. Most buildings on campus have an AED, and now, these AED cabinets also contain a Stop the Bleed kit.

Each kit contains a CAT tourniquet, an emergency trauma dressing, compressed gauze, two pairs of gloves, trauma shears, a marker and an instruction card. There are more than 300 kits on campus, with extra kits in higher population buildings, such as Tate Student Center, Miller Learning Center and parking services vehicles. The university’s Griffin, Tifton, Gwinnett and Buckhead campuses also are part of the program.

OEP holds Stop the Bleed classes at Training and Development throughout the year, or departments can schedule them by request. The next bleeding control class is set for Jan. 18 from 9-11 a.m. More information is at http://www.prepare.uga.edu/stop-the-bleed and http://hr.uga.edu/employees/training/.