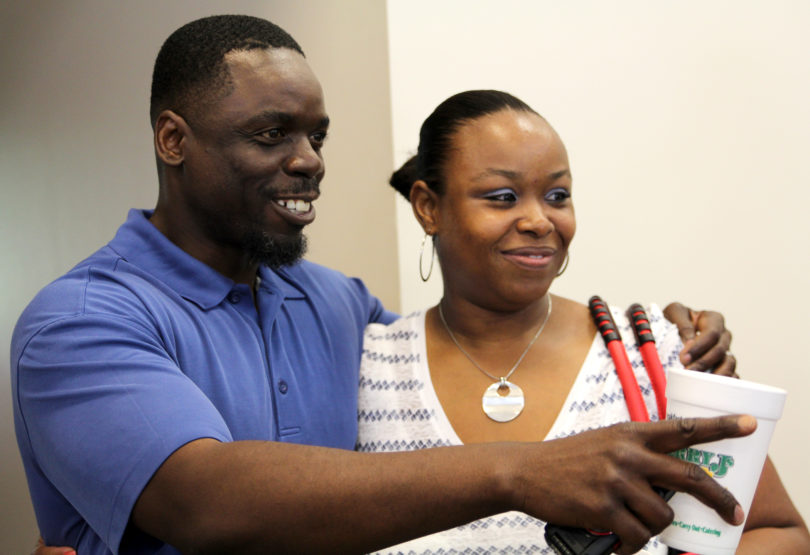 “Positive parenting not only has a protective effect on risky behaviors, but it also appears to be promoting health among a population that is at risk for diabetes, cancer and stroke,” Brody said at the project’s program impact meeting April 28 in Tifton.

The Strong African-American Families, or SAAF, project is a joint partnership between the Center for Family Research and UGA Extension. It was launched five years ago in eight rural Georgia counties with a $3.4 million grant from the National Institute of Alcohol Abuse and Alcoholism.

On Monday, three mothers who participated in the program with their children addressed project leaders and organizers. All of them credited their participation in the project with strengthening their families.

“Everything I learned (in the SAAF project) is going to take us further into our future,” said Sabrina Morris, a Tifton resident and single mother who participated in the program with her son.

Project participant Kimberly McKennon credited the program with improving her relationship with her young daughter. “We communicate better,” she said. “Before, we couldn’t talk. Now, we talk about everything.”

Of the almost 500 families recruited, more than 300 youths, ages 11-13, participated in the program.

After enrolling in the project, each participating family member was asked to fill out a pre-test survey. After completing the survey, families were randomly assigned to receive SAAF immediately or wait one year before receiving SAAF.

Approximately two months after the program group received SAAF, all families were asked to complete a post-test survey.

Analysis of this information revealed between the five months that elapsed between pre-test and post-test, SAAF was effective in enhancing youth and family-related protective processes known to reduce youths’ risk for substance use and other problem behaviors.

Compared to the waitlist parents, SAAF parents evidenced fewer symptoms of depression and increased levels of effective parenting practices and engaged their youth in conversations about how to avoid substance use and other risk behaviors.

Youths experienced direct benefits as well. Compared to those in the wait-list group, SAAF students evidenced higher levels of self-control and goal-setting behavior, held less favorable attitudes toward substance use and peers who engage in substance use and felt more confident that they could resist peer pressure to engage in risky behavior.

The SAAF project team included Center for Family Research personnel as well as Steve Kogan, Ted Futris and Don Bower in the College of Family and Consumer Sciences’ department of human development and family science. This group partnered with UGA Extension faculty in family and consumer sciences and 4-H to refine protocols for outreach to African-American families.

Together, they trained community professionals, called SAAF Extension Educators, and reached out to schools, faith-based organizations and other community stakeholders to engage African-American families.

“The program started by engaging schools and faith-based groups,” Futris said. “All this was done so we could develop trust. Ultimately, it’s that trust that builds support for a program to be sustainable.”

Greg White, a Tifton native and research assistant with the Center for Family Research, was one of the SAAF Extension facilitators.

He taught courses with parents and their children on topics such as handling peer pressure, dealing with temptations for early sex, goals for the future and dealing with unfair situations.

“You ought to see how they (the parents and their children) interact,” White said. “They’re hugging, they’re laughing, they’re loving. That’s all the feedback I need.”

Futris and Kogan will present findings from the five-year project at the Society for Prevention Research’s annual conference in Washington, D.C., in May.