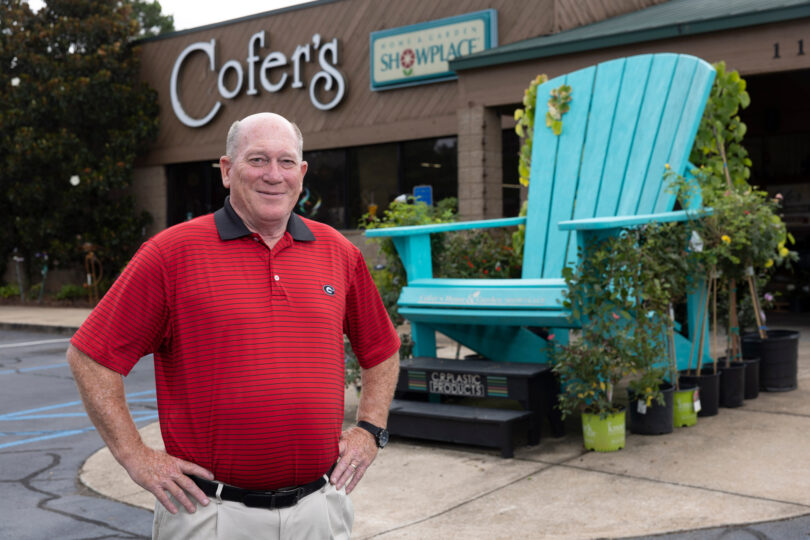 Cofer's Home & Garden has been an Athens institution for 100 years. Stuart Cofer BBA '81 is now guiding the store his grandfather started. (Photo by Peter Frey/UGA)

When Stuart Cofer BBA ’81 drives around his hometown of Athens, there are two things he can point out: the flowers purchased from his family’s plant nursery and all the changes that have been made since he was a kid.

Cofer, an Athens native who graduated from UGA with a degree in small business management, followed in his family’s footsteps, which is a popular thing to do in the Cofer household. Cofer, his father, and his brother all graduated from UGA—with his son closing the circle as a senior in the Terry College of Business.

Beyond sharing the Georgia genes, the Cofer family is widely known locally for their plant nursery, Cofer’s Home & Garden, founded in 1922 by Stuart’s grandfather as a seed and feed supply store in downtown Athens. The flagship store is now on Mitchell Bridge Road on the city’s west side. They sell unique plants, shrubbery, and outdoor furniture. The focus is on yards and gardens rather than catering to what was then an agricultural economy.

“From a young age, my brother and I had an interest in coming to the family business. That’s where our hearts always were,” Cofer says.

Although he spent a few years after college in Los Angeles, working his way up the chain at Enterprise Rent-A-Car, Cofer always knew he’d return to Athens. 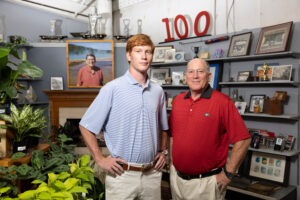 Stuart Cofer with his son Stephen, who is currently a student in the Terry College of Business. A photo of Stuart’s father sits over their shoulder. The memorabilia on the shelves dates back to the store’s opening in 1922. (Photo by Peter Frey/UGA)

By some estimates, only 13% of family-owned businesses make it to the third generation, with the exceedingly rare 4% surviving to the fourth. Cofer’s Home & Garden, currently sitting at the third-generation level, will be that exception: Cofer’s son, Stephen, will begin easing into the job in the years that follow his UGA graduation.

As the Cofer family business has been around for a century, it’s not surprising that they have a bit of Athens’ history in their roots. The warehouse on Spring Street, where Cofer spent his childhood running around with his brother and cousins, is now UGA’s Delta Innovation Hub.

“It’s neat to know that this warehouse is now a hub for entrepreneurs and startups,” Cofer says. “That’s what my grandfather was, and here we are 100 years later and that building is still being used for entrepreneurs.”

Cofer credits a few key things to the business’s success: responding to the needs of the local economy, for instance. “If my grandfather was to walk in the store today, he would have no clue that this was the business he started in 1922,” he jokes.

Although he never pressured his kids into joining the business, Cofer enjoys bringing his 7-year-old granddaughter to the store and showing her the importance of hard work.