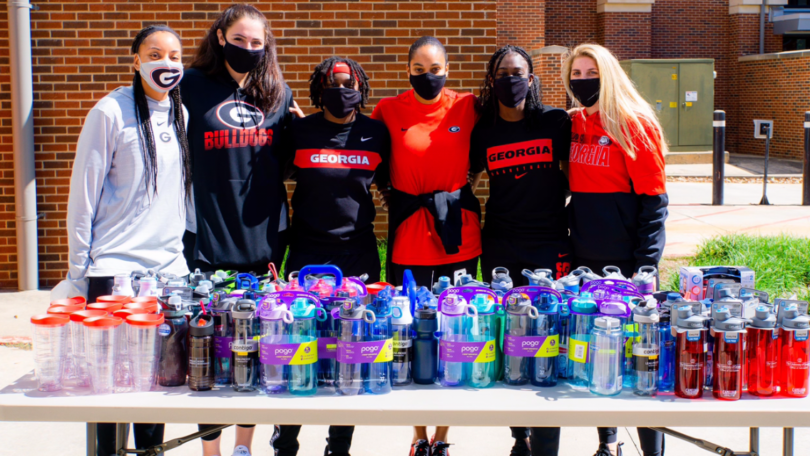 Making sure all Georgia Bulldogs are registered to vote. Providing Wi-Fi hotspots for local students. Helping raise money and provide goods for community members amid the coronavirus pandemic. The University of Georgia’s student-athletes, coaches and athletic association staff are working to make a difference during these challenging times.

“They’ve come up with all kinds of ideas about what we think we can do to take action, because we’re big on action,” said UGA’s football coach Kirby Smart.

At a long and emotional meeting during the preseason, Georgia’s football team came up with a list of nearly 20 things they could do to make a difference in the local Athens community. Soon after, the Dawgs for Pups initiative was launched. The team’s first effort raised enough funds to provide internet access via Wi-Fi hotspots for students in Clarke County public schools who had to be online for virtual classes. 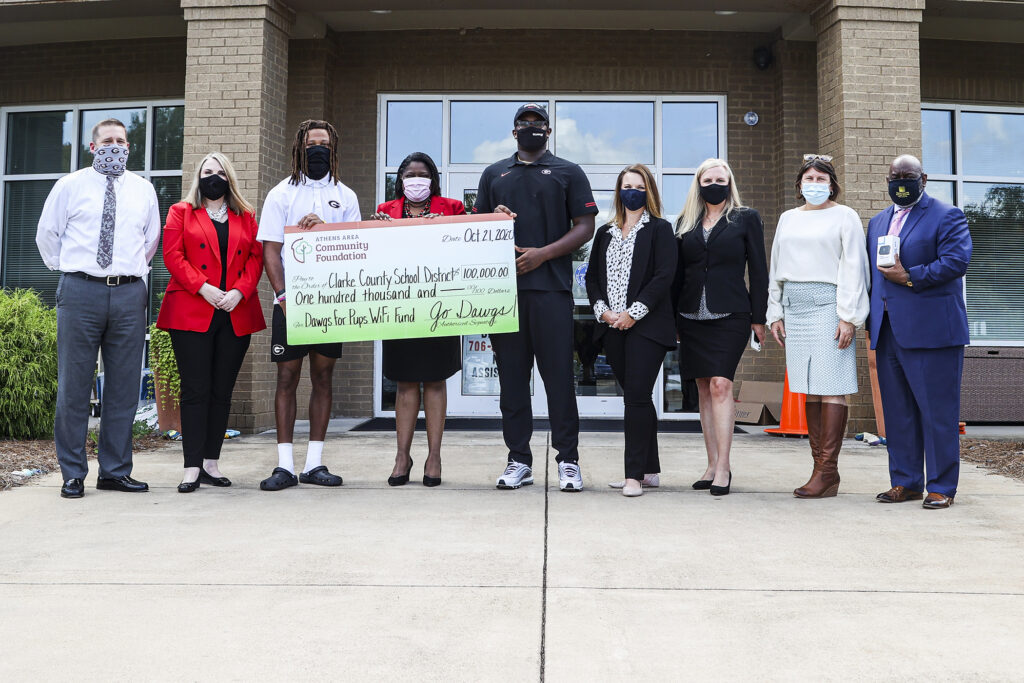 Working with the Athens Area Community Foundation, and through the support of UGA staff, the UGA Athletic Association, current and former student-athletes, and the Bulldogs’ many fans, $100,000 was raised to secure internet access for about 1,200 local families.

“We figured that $20,000 would cover a month (of Wi-Fi service), so our initial internal goal was around $60,000,” said Senior Deputy Athletic Director Josh Brooks, who helped lead the initiative. “We figured if we covered three months that would pretty much encapsulate the fall semester.”

Thousands of snacks and winter coats

Another Dawgs For Pups initiative was the Food2Kids Snack Drive that helped the Food Bank of Northeast Georgia collect nearly 28,000 pounds of snacks for local children.

“It was very special just to see how a lot of Dawg fans got behind this and supported everything that we were doing so that kids can still go to school with their Wi-Fi. It just shows how special the Dawg fans are,” said junior football player Eric Stokes, who was there for the presentation of the ceremonial $100,000 check to the Clarke County School District.

Learning and nutrition go hand in hand, said Tracey Massey, community outreach manager at the Food Bank of Northeast Georgia. “The reason Food2Kids is so important is that we’ve discovered that the children can’t learn when they don’t have enough nutrition,” Massey said. “Without nutrition, kids do not excel in school.” 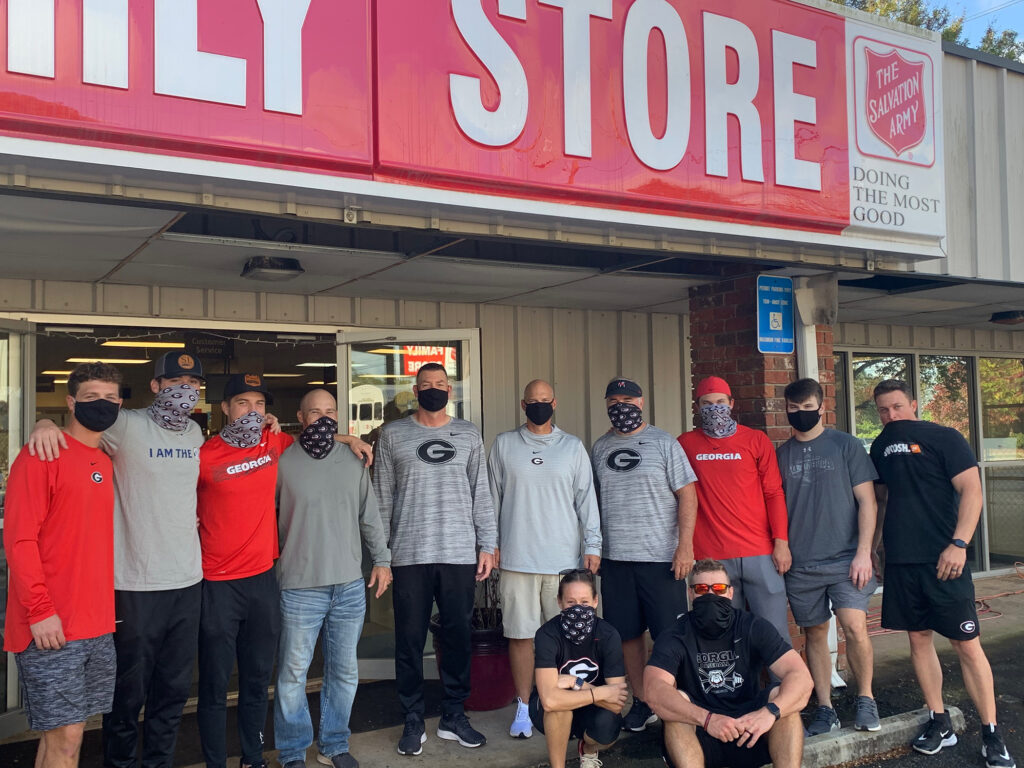 Baseball team members and others outside of the Salvation Army. (Submitted photo)

Massey said the coronavirus pandemic made the Dawgs for Pups initiative even more vital as the Food Bank struggled to meet the community’s needs.

“When COVID hit, you know how the grocery stores looked?” Massey asked, referring to the empty shelves. “That’s how we looked, because we get leftovers from the grocery store. There was not anything left over. That’s when Georgia athletics stepped in. A lot of people want to help, but they don’t know how. With the direction that the athletic department gave them, they were able to accomplish this wonderful feat. It was amazing.”

The third Dawgs for Pups initiative was a coat drive to help keep children warm as we head into winter. In October, the football team and the rest of the athletic association, in conjunction with the Boys & Girls Club of Athens, was able to secure 437 new or gently used coats for local kids.

In addition, Georgia’s Student-Athlete Advisory Council (SAAC) is working with community shelter Bigger Vision of Athens to collect much-needed items, according to softball pitcher Mary Wilson Avant. The plan is for the SAAC initiative to become an annual project.

Getting out the vote

Another important project was the UGA women’s basketball team effort to register all Bulldog student-athletes to vote. Following the death of George Floyd in Minneapolis in May, coach Joni Taylor held numerous team meetings to discuss what had happened and what the team could do going forward.

Those meetings sparked the Dawgs To The Polls push, and the team worked with The Georgia Way to get all of its student-athletes registered to vote in time for the 2020 election.

The team also hosted a donation drive for refillable water bottles for local children who could no longer access the water fountains at the Boys & Girls Club due to the pandemic.

“Some good things have happened out of COVID and out of the social justice movement,” Taylor said, “and one thing is that young people have really used their voices and are passionate about doing so, and that’s exciting to see.”

Several former Bulldogs have also stepped forward to help during these difficult times. Former quarterback Matthew Stafford and his wife, Kelly, a former Georgia cheerleader, have committed to donating $1.5 million to the university. Among other things, the money will be used to start a social justice program, which Smart donated to as well, launched by the UGA Athletic Association.

All of Georgia’s athletic programs do a variety of work in the community throughout the year, from reading to kids at local schools to helping out at the Salvation Army. The pandemic and the social justice movement have increased the need and the desire for more engagement, said Deputy Athletic Director Darrice Griffin.

“As we leaned into conversations with our student-athletes and our teams regarding the social climate, race reckoning and social injustice, one theme that emerged in all of those conversations is a desire to be more active and engaged in our community,” she said. “And our student-athletes have realized … that one way to make a difference and to affect the change that we all want to see is to serve and to give of our time and talents.”