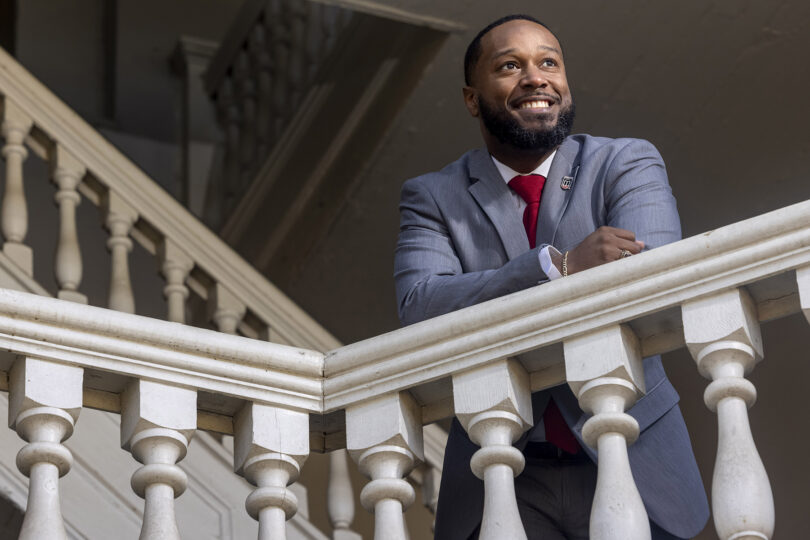 Carl Miller is currently pursuing a Ph.D. in the Mary Frances Early College of Education's learning leadership and organization development and works as a graduate assistant in the Office of Institutional Diversity. (Photo by Dorothy Kozlowski/UGA)

“This chasm that has been as naught to me

To that fair-haired youth may a pitfall be;

He, too, must cross in the twilight dim;

Good friend, I am building this bridge for him!”

The Bridge Builder poem has remained in Carl Miller’s mind ever since he memorized it as part of initiation into the Omega Psi Phi fraternity at Savannah State University. With messages to pave the way for the next generation, Miller has embodied this poem throughout his personal and professional life.

“Fulfilling the dream is about building bridges. It’s about helping people to get from where they are to where they need to be,” said Miller.

Miller is a doctoral candidate in the Mary Frances Early College of Education, owner of C. A. Miller Publishing Company and the 2022 graduate student recipient of the President’s Fulfilling the Dream Award. Presented at the Martin Luther King Jr. Freedom Breakfast, the award recognizes students, faculty, staff and community members that exemplify the words and legacy of the Rev. Dr. Martin Luther King Jr.

Following the completion of his bachelor’s degree in English, Miller created the C. A. Miller Publishing Co., which produces children’s books by authors of color on positive character traits, leadership and diversity.

“When I started my publishing company, I said I didn’t just want to make money, I wanted to make a difference,” he said. “You should teach leadership to young people. When you play youth sports, you already begin to develop leadership styles. You may not know it, it may not be formal, but I think we can teach kids leadership approaches at a very early age.”

An author himself, Miller emphasized the importance of teaching positive character traits to children.

“I think it’s about a concern for our future,” said Miller. “It’s a lot easier to convince children while they are still developing, and you really have an impact on them, versus trying to change the thinking of adults. Impacting children is the best path forward for reaching the community we want.”

Miller said the program is, “about character building, it’s about diversity, and just kind of a holistic approach to developing strong kids with open minds and open hearts for a better society.

“I have a diverse background. I’ve always loved communication. And I think that just by the nature of my work in the community, I got on this leadership track,” said Miller, who has found a passion for leadership. Miller is currently pursuing a Ph.D. in learning leadership and organization development and works as a graduate assistant in the Office of Institutional Diversity. 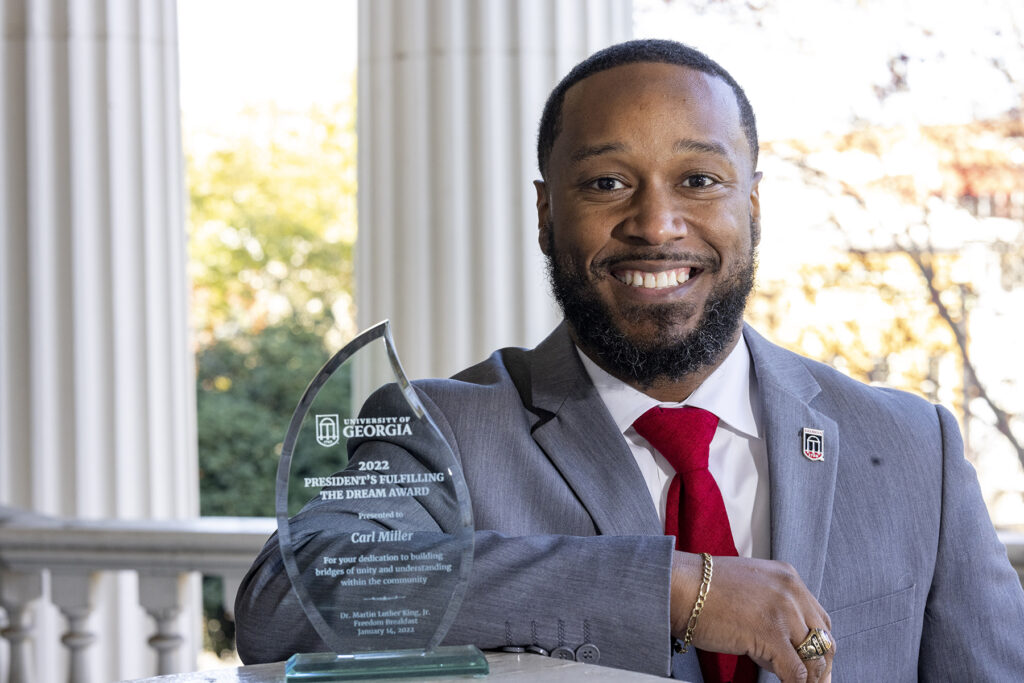 Carl Miller is the 2022 graduate student recipient of the President’s Fulfilling the Dream Award. (Photo by Dorothy Kozlowski/UGA)

Miller says he hopes he can use his Ph.D. and what he learns in his program to expand leadership programs in higher education. “I want to develop a full leadership program for Black male professionals aged 25-35. I figure if you’re going to teach leadership, you really need to understand the science,” he said of his future following his degree.

“In all of my classes, I am the only African American. I don’t see myself in staff or faculty, so that’s why I want to set up a program that provides opportunities to someone who might not have been given the exposure that I’ve been given,” he said. “I believe that you need to go where people are. You can’t just assume that people know about programs or that they are aware. You have to go to the crowd that you want to attract.”

When asked how he was able to balance his business, his community and his education, he said with a chuckle, “Time management, a little bit of Starbucks, and a lot of prayer.”

Miller is still involved with his community and church in Savannah, and he returns to the city every other week to serve as a deacon and connect with his congregation, mirroring King’s life.

“I think the biggest takeaway from Dr. King is his quote that says, ‘It’s always the right time to do the right thing.’ That is something that I carry with me every day. I don’t care what’s going on or what you’re dealing with, you can always do the right thing. I think if we just keep that, and let that be our guiding star, I think we’ll be all right. Because you can never go wrong by doing right,” said Miller.