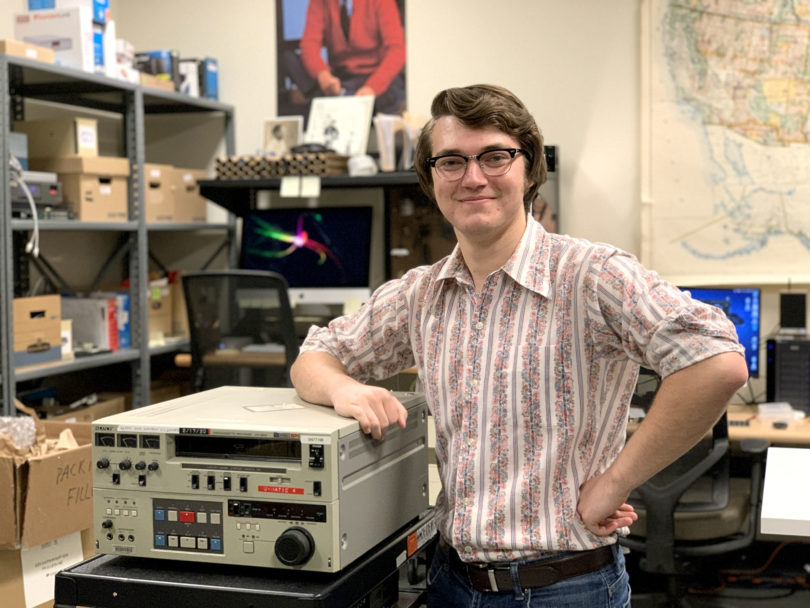 Tyler Ortel, a student employee at Walter J. Brown Media Archives and Peabody Awards Collection, was named the 2020 Student Employee of the Year by the UGA Career Center. (Submitted photo)

The University of Georgia Career Center introduced the top 100 student employees of the year and recognized the individual and team award winners.

Tyler Ortel, a senior majoring in entertainment and media studies and film studies from Watkinsville, was named the individual 2020 Student Employee of the Year.

Ortel works at the Walter J. Brown Media Archives and Peabody Awards Collection, part of UGA’s special collections libraries. Employed there since 2018, Ortel is an audiovisual technician and has digitized hundreds of hours of film, audio and videotape.

“Tyler has a rare combination of enthusiasm, initiative and reliability that allows me to trust him with incredibly complex technician work,” digital archivist Callie Holmes wrote in Ortel’s nomination letter.

Because of Ortel’s help, the team has managed a 50 percent increase in public requests for special collections content, a source of revenue that is crucial to the department’s mission, according to Holmes. Ortel’s contributions have not only positively affected the department but the larger historical record as well.

“Last year, Tyler’s work helped us to identify Ed Dwight, a man who was poised to become the first black astronaut until [President John F. Kennedy’s] assassination when he was pushed out of the program,” Holmes said. “Without Tyler’s work, Dwight might still be languishing in our records as ‘unidentified male.’”

Ortel’s film discovery was featured prominently in a New York Times feature on Dwight, of whom there are limited moving images known to exist.

“To find someone like Tyler, who has a genuine passion for analog video tape, is like winning the lottery,” Holmes said. “His skills are not just rare in our department or at UGA, but even nationally and internationally.”

From left, Parker Jamieson, Lui Suzuki-Williams and Matthew Corn received the 2020 Student Employee of the Year Team Award from the UGA Career Center. The trio works in the laboratory of Ted Ross, Georgia Research Alliance Eminent Scholar and Director of the Center for Vaccines and Immunology. (Submitted photos)

First time recognition for a team

This year marked the first time the UGA Career Center solicited nominations for a team award.

The trio works in the laboratory of Georgia Research Alliance Eminent Scholar and director of the Center for Vaccines and Immunology Ted Ross in the department of infectious diseases. Corn, Jamieson and Suzuki-Williams are responsible for individual projects supporting the lab’s pursuit of a universal influenza vaccine. But according to Zachary Reneer, the fourth-year graduate researcher who nominated them, the team came together to collaborate on a critical group project.

“Their group project entailed working together and with other undergraduate students to synthesize DNA plasmids. These DNA plasmids contained patented protein sequences that our lab has used to create vaccines,” Reneer wrote in the nomination letter. “In the near future, human clinical trials will begin using these plasmids.”

According to Reneer, this work helped UGA land a significant grant from the Collaborative Influenza Vaccine Innovation Centers in late 2019 that could be up to $130 million over seven years.

“I have no doubt that each student will have exceptional postgraduate careers and will become invaluable alumni of the University of Georgia,” Reneer wrote.

Kayla McElreath, a senior history and geography major, was recognized as the individual runner-up. McElreath is from Monroe and is a data analyst for UGA Auxiliary Services. Senior biological sciences major Margaret Lemons from Salt Lake City, Utah, rounded out the top three. She is employed as a veterinary research lab assistant in the department of large animal medicine.

The Student Employee of the Year Awards is co-sponsored by the Division of Student Affairs and awards are determined based on nominations by supervisors.