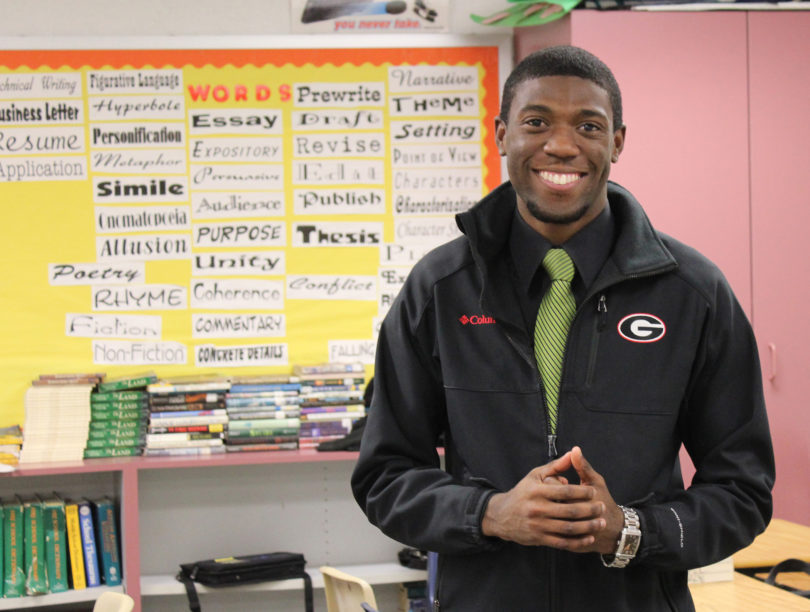 It’s one thing to leave your college campus feeling like a piece of you stays behind. But when Charles King graduates this May from UGA, he will be leaving behind a legacy.

That’s because King, a middle school education major who is returning to his hometown of Atlanta to work for Teach for America, is also a key figure in reviving the Black Male Leadership Society. He helped revive the organization during his sophomore year, and today the group’s mission of service and support is woven into King’s daily life.

In recognition of his work, King was one of four recipients of UGA’s 2015 Fulfilling the Dream Award, given Jan. 23 as part of the annual Martin Luther King Jr. Freedom Breakfast. King was the only student to receive the award, which honors community service to those both in and outside of the UGA community.

“We’ve seen (the Black Male Leadership Society) grow over the past two years; we’ve done a number of things to embolden and inspire the black male population on campus,” said King, noting that black men make up just 2 percent of UGA’s student population.

As a result, King and others in the organization have worked closely with the Office of the President and the Office of Institutional Diversity to recruit more black male scholars. They invite any black man who has been accepted by UGA to visit campus in the spring. This April will be the organization’s second year hosting the prospective UGA students, and King is happy with the results from just the first year.

The Black Male Leadership Society, or BMLS, has undergone a complete transformation in the last two years. King said he heard about the organization after arriving at the Office of Multicultural Services and Programs looking for ways to get involved. The organization had dwindled to one man.

King pulled some friends together and they all sat down to begin mapping out a new direction they thought BMLS should take. It took a semester, but they planned out every detail: Who are the members? How do you become a member? What events should the organization host?

Other, smaller events both on and off campus throughout the year continue the theme of black identity and support. BMLS hosted a “know your rights” forum last fall following the Michael Brown shooting, which included police officers from Athens and UGA, plus professors and local attorneys. The group also hosted a vigil honoring lives lost to police brutality and, this semester, is planning a winter clothing drive, a concert to benefit prostate cancer research, and a two-part event called A Gentleman’s Affair. The first part educates men on appropriate attire for different situations, and a second part takes members and alumni to Lawrenceville to shop for tailored suits at a discounted rate.

King’s commitment to service doesn’t end at UGA’s campus. King also has been a student teacher at Hilsman Middle School in Athens, where he has earned a reputation for engaging with students in the classroom.

Kathy Thompson, a professor-in-residence at Hilsman Middle School, said King is well on his way to becoming an exceptional educator.

“He always finds a way to connect learning to students’ daily lives and interests,” Thompson said.

When teaching about the Shakespeare play A Midsummer Night’s Dream last semester, King had his students create social networking accounts for the play’s characters.

“It’s clear that Charles is committed to the education of young adolescents,” Thompson said. “I believe he has a bright future as a middle grades educator.”

When it comes to balancing student teaching and BMLS, King luckily has a strong group of BMLS officers who support the events.

Because of student teaching, King isn’t on UGA’s campus until after 5 p.m. each day, so he’s in constant communication with other BMLS officers.

But the packed schedule is worth it, King said, because of the community that’s been created.

“We want to create a place where all of us can congregate and learn from each other in some facet,” he said. “And, socially, we need to see more of each other. It’s really hard when you know of people, but you can’t communicate with them because they’re not in your classes. We’re trying to bring everyone together.”

And bringing in students who are new to UGA and letting them get to know upperclassmen also creates a valuable mentor network, which is also part of the legacy that King is happy to stay in touch with once he graduates.

“It reaches down from seniors and juniors to sophomores and freshmen,” he said. “So, if some of our freshmen come in, and one says he wants to be a teacher, someone can say, ‘Check out Charles. He’s an education major and he’s about to graduate.’ It creates that cycle.”