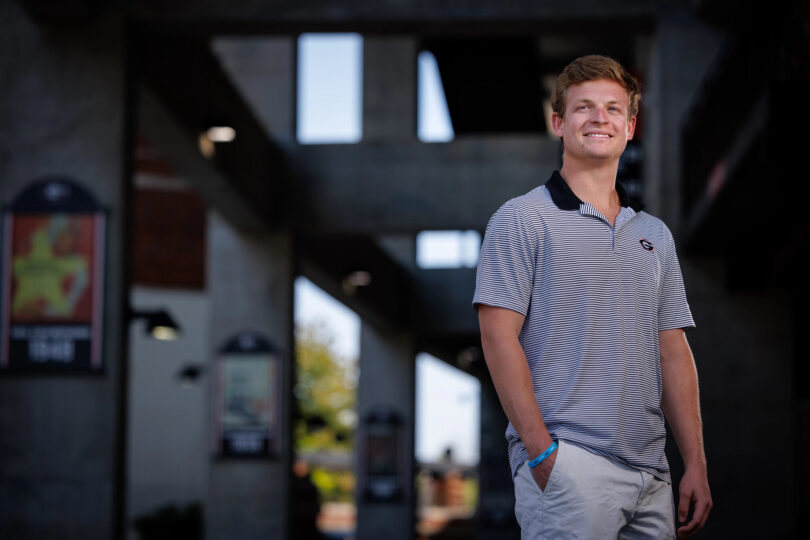 As a child, Hayes Uga Poindexter picked his own middle name

Most University of Georgia students feel their time at UGA is a big part of their identity, but for one UGA graduating senior, it’s part of his name.

Hayes Uga Poindexter, of Woodstock, graduates on May 13 with a degree in marketing with a professional sales emphasis from the Terry College of Business. It’s a dream he’s worked toward since he was in elementary school when he started telling people his middle name was Uga.

“It’s not on my birth certificate, but my parents didn’t give me a middle name,” Poindexter said. “They said you can probably figure that out when you get older. When I was 9 or 10, I just started telling people it was Uga and it just kind of stuck.”

“Pretty much anywhere I have to put a middle name, I put Uga,” he added.

A few school registration forms and job applications later, and the name is part of his permanent record.

Some people might think it’s a lot of pressure to put on yourself, but Poindexter’s commitment to his school of choice was unshakable. After high school, he worked selling roofing services door-to-door and then started his college career at the University of North Georgia before transferring to UGA.

“As long as I remember, we were watching UGA football games and coming up to Athens,” Poindexter said. “I knew that I wanted to come here from a young age. So, I made that my goal, and here I am.”

Today, he’s the only Uga in the official registry of UGA students and alumni.

He would have valued the education and experiences he’s had at UGA and the Terry College in any year, but he feels especially lucky to have been here the last two years to watch the Georgia football team win the national championship.

“Winning the national championship was the best night of my life,” he said. “I’ve honestly never been that happy or seen so many people so happy. It was just such a great energy across campus.”

Right now, he’s navigating the job market and planning for life after graduation.

“I’m just so excited to be at this part of my life and to be graduating,” he said. “I would like to think that Uga X will be cheering for me as I walk the stage.”