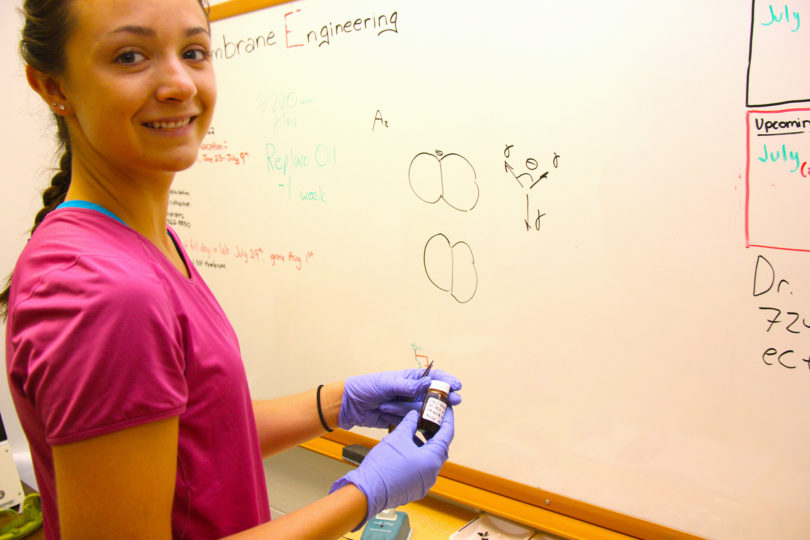 The symposium in the Paul D. Coverdell Center for Biomedical and Health Sciences is the capstone of a 10-week Research Experiences for Undergraduates program funded by the National Science Foundation.

The program connects undergraduate students with an interest in nanotechnology and biomedical research with two faculty mentors—typically one in the UGA College of Engineering and one from other schools and colleges on the Athens campus or other University System of Georgia institutions.

“The most important thing is the experience of research because the students who participate in our REU generally have little experience in the lab,” said Leidong Mao, an associate professor in the UGA College of Engineering and the program director. “This experience will give them a better idea of their career choices—from industry to graduate school.”

Mao says approximately 200 students applied to come to Athens for the nanotechnology and biomedicine REU; only 10 were accepted.

One of those students is Nneoma Okonkwo, a rising second-year student at MIT. Okonkwo is working with Mao and Carsten Schroeder of Georgia Regents University on a device that one day may allow physicians to diagnose lung cancer in patients without the need for painful and expensive tumor biopsies. The device, a cell enrichment microfluidic chip, would allow doctors to monitor a patient’s blood for circulating tumor cells, or CTCs. The concentration of CTCs in the bloodstream is believed to be an important indicator of cancer progression and metastasis.

“I wanted to perform research as an undergraduate, but, in addition to my classes, I’m a member of MIT’s varsity track team, which is a huge time commitment,” Okonkwo said. “So I decided to do research this summer, and UGA’s program was a good fit for my interests.”

Like Okonkwo, University of Connecticut student Nicole Gay wanted an intensive research experience but wasn’t sure time in the lab would fit into her busy class load. Gay is pursuing a combined bachelor’s and master’s degree in biomedical engineering and decided to devote her summer and winter breaks to research.

During her time at UGA, Gay has worked with Eric Freeman and Xianqiao Wang, both assistant professors in the College of Engineering. She’s helping determine if nanoparticles can be beneficial as therapeutic agents in cancer treatment without disrupting healthy membrane function.

“Nanotechnology is an explosive field that has the potential to make a huge impact in medicine, but we first need to understand how nanoparticles interact with the body,” Gay said. “We want to know if nanoparticles can penetrate individual cells without rupturing the cell membrane. There’s a great potential for drug delivery and other treatment options.”

Another REU student, Ishmael Rogers, wants to design more functional prosthetics that interface with the body’s nervous system through artificial intelligence. He also wants to make the prosthetics lightweight, durable and more affordable than current options by creating them largely on 3-D printers. Rogers’ mentors are Jason Locklin, an associate professor in the Franklin College of Arts and Sciences’ chemistry department and the College of Engineering, and Cheryl Gomillion, an assistant professor in the College of Engineering.

Rogers, who will graduate from Atlanta Metropolitan State College this year with degrees in chemistry, mathematics and pre-engineering, says he’s still weighing options for the next step in his education, but his UGA experience has left a lasting impression.

“I love Athens, and everyone has been extremely helpful,” Rogers said. “I’m new to research-based institutions, but I love the fast pace and the hands-on experience. I want more people to be a part of this next year.”

The symposium is open to the public, but attendees are asked to RSVP to m.miller@berkeley.edu. More information about the REU and the symposium is available at http://reu.engr.uga.edu/ and by contacting irogers@infinitelydeep.com.