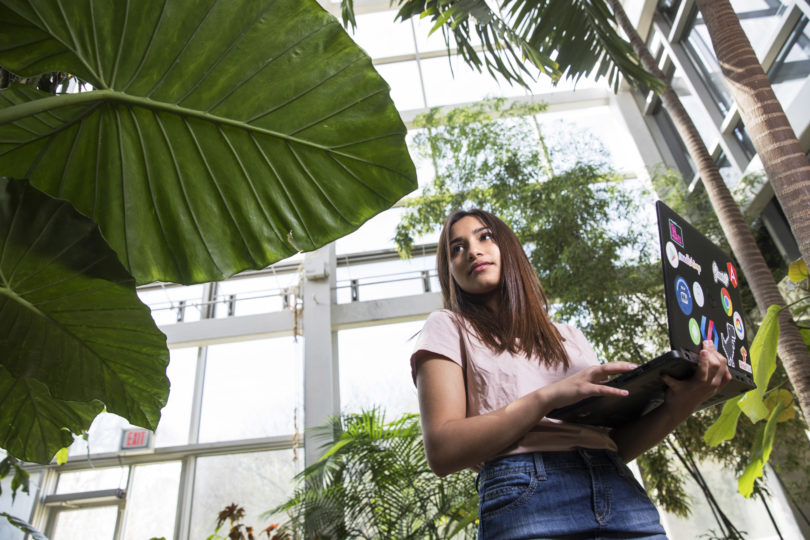 Shaza Mehdi at the State Botanical Garden of Georgia. (Photo by Dorothy Kozlowski/UGA)

For some, a rose is a symbol of beauty or love. For Shaza Mehdi, it is a connection to her mother, but also a gateway to innovation.

Mehdi’s mother, Afshin, grows rose bushes at their Lawrenceville home. But a few years ago, the plants kept getting diseases, ruining the blooms.

Mehdi tried diagnosing the flowers by Googling images of plant diseases and comparing those images with the sick roses.

“I became pretty good at figuring it out,” she said. And that sparked an idea. “I thought we could probably train a computer to do the same thing.”

That’s how Mehdi came up with PlantMD, an Android smartphone app that can diagnose a plant disease with the snap of a photo. 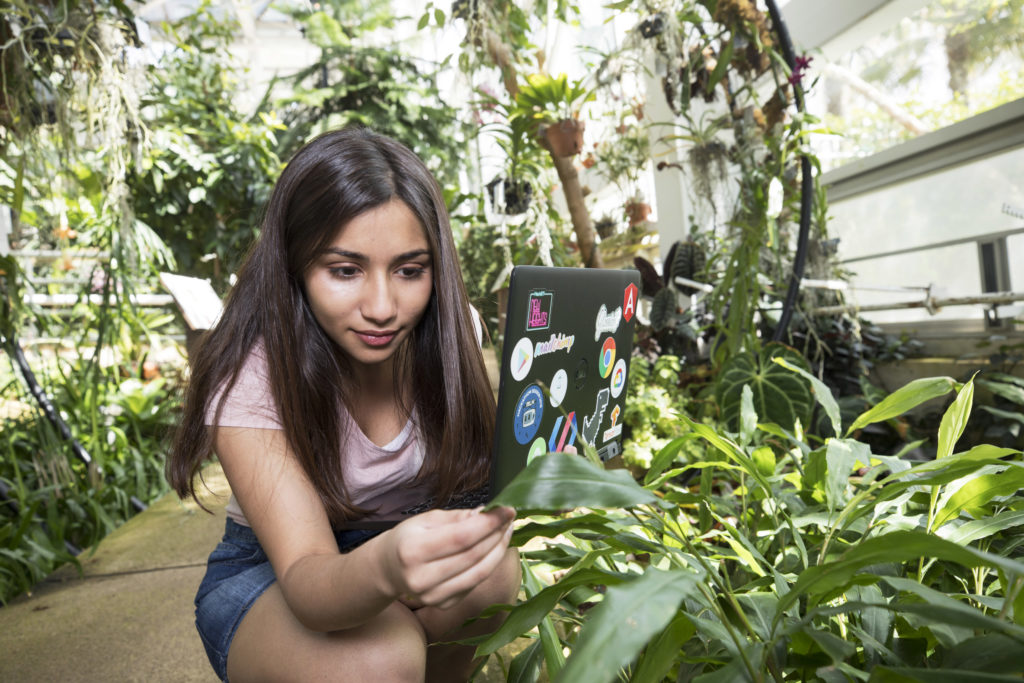 She spent the summer before her senior year of high school researching how to build an app and then learning how to code. It seemed to come naturally to her.

“You don’t have to be a super genius to get into coding,” she said. “Really anyone can do it with an idea and perseverance.”

She used Google TensorFlow, an opensource platform for machine learning. Machine learning, a form of artificial intelligence, is the process by which computers teach themselves to get better at a given task by figuring out statistical patterns.

After three months of researching, coding and getting some help from her high school teachers, Mehdi launched the app.

“PlantMD works when you take a picture of a plant,” she said. “It tells you what plant it is and whether it is healthy or diseased, and if it is diseased, what disease it has.”

After her local paper wrote a story about her app development, a video team from Google came to learn more because she had used its TensorFlow software. They flew her to California to speak about her work at a conference. Wired also published an article about her work. All of this happened just as Mehdi was beginning her first year at the University of Georgia.

Her foray into app invention sparked an interest in the power of machine learning and artificial intelligence and Mehdi is now inspired to go beyond just recognizing plant diseases, something she plans to do as a computer science major in the Franklin College of Arts and Sciences.

“I really love the potential to make technology more human,” she said. “I think there are so many potential applications for it.”

And because AI applications can possibly be used to harm humanity, Mehdi wants to help steer artificial intelligence in a positive direction that will benefit people.

“It’s really important that AI is used for good. I do think there’s more potential for good [than bad], but it really depends on who these engineers are and what companies are utilizing them.”

As for inventing new apps using machine learning, Mehdi said her UGA coursework was too demanding during her first year to allow time for a new project. But this summer could be her chance to invent the next thing.

“Literally as soon as I get an idea or get any bit of spare time, I’m down to start coding something.”