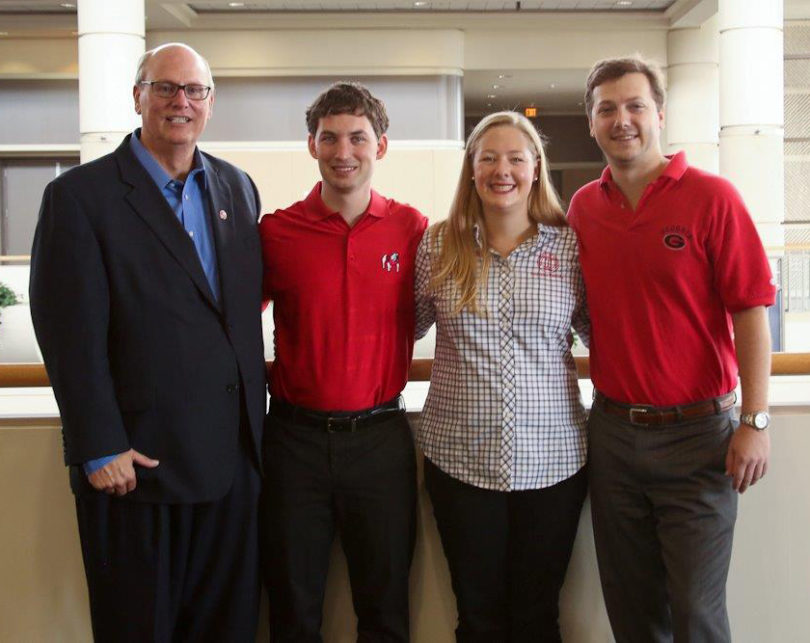 Athens, Ga. – A team of University of Georgia financial planning students was named best in the country at the Financial Planning Challenge competition Oct. 21 in Orlando.

The three-person team of Kelsey Brooks of Roswell, Chase Burkhart of St. Augustine, Fla., and Matt Riggins of Lavonia, all senior financial planning majors within the College of Family and Consumer Sciences, won top honors among an elite group of eight finalists from across the country.

The teams were given six weeks to compile a comprehensive financial plan for a fictitious couple in New York. They also were judged on their oral presentations of the plan as well as their responses in a quiz bowl-style competition at the Financial Planning Association’s convention.

“I was in disbelief,” Riggins said of the victory. “It was the biggest surprise I’ve had all year. It was stunning, really.”

The work began in April when the team was presented with the New York couple’s case study. The UGA team spent hours poring over legislation and tax and estate laws.

The trio ultimately produced an exhaustive, 106-page document as the fictitious financial planning firm of Axiom Wealth Management. The report covers everything from cash flow to taxes, insurance, investments, estate planning and retirement.

Riggins estimated he spent more than 60 hours on the plan. Brooks and Burkhart likely doubled that amount, he said.

“I knew it would take a lot of time, but I think I underestimated the time it would require,” Brooks said. “There were definitely a lot of late nights and sleepless nights, but it’s all worth it now.”

John Grable, the Athletic Association Endowed Professor of Financial Planning within the department of housing and consumer economics, served as faculty adviser to the group.
Grable was not allowed to critique the team’s work, serving mostly as a source of encouragement.

“I didn’t see this plan until we shipped it off,” Grable said, “but the great thing about UGA students is once they make a commitment, my experience is they follow through. That shows real professionalism.”

In addition to the recognition, the department also won a $10,000 scholarship award for the team’s efforts, money that will be used to fund additional student trips to conferences and other professional networking opportunities.

“This really helps validate the work my colleagues are doing and the students are doing here,” Grable said of the team’s victory. “Not only for these three students but for the whole major. People from the outside are saying ‘Georgia, what you are doing is effective.’ I’m just so proud of them and their efforts.”

For the students, the rewards gained from the experience are incalculable.

“I went to Georgia to win (the competition), to be honest,” Riggins said. “That was the No. 1 thing: I wanted to win. We have a lot of pride in UGA, and we feel like our program is a top-tier program, and we wanted to show that.”

For more information on financial planning in the department of housing and consumer economics, see http://www.fcs.uga.edu/hace/undergraduate/ffp_index.html.