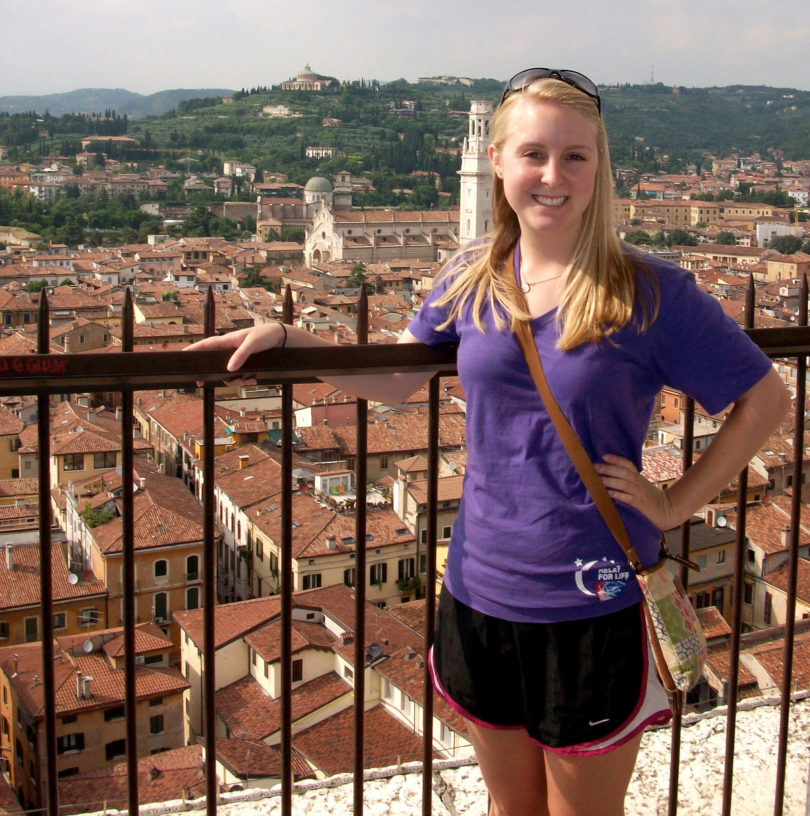 Athens, Ga. – Open doors take on a literal meaning for many University of Georgia students as they move their education beyond the state’s borders. During the 2009-2010 school year, 1,994 studied abroad. Their global experiences earned UGA a 15th-place ranking among U.S. doctoral/research institutions on the Open Doors 2011 list released annually by the national Institute of International Education.

Over the same time period, UGA ranked fourth in the nation in the number of students who participated in short-term programs (1,695 students). Additionally, 399 students chose a full semester or academic year abroad.

The Open Doors report is released each year during International Education Week, Nov. 14-18. The U.S. Departments of State and Education jointly sponsor the nationwide recognition.

“Study abroad is critical to students for a number of reasons,” said Kavita Pandit, the UGA associate provost for international education. “First, it forces students to listen, observe and reflect on what’s going on around them-all of which are critical to learning. They also experience personal growth and attain the quiet confidence that ‘I can do this,’ whether it’s to catch a bus or to learn a foreign language.

“Finally, study aboard gives them global skills and competencies that are critical for the work place. There is no doubt that employers value study abroad experience when they look at résumés.”

Students choose to study abroad for multiple reasons. But for Emily Richter, a senior recreation and leisure studies major from Dunwoody, her biggest motivation was her father’s global experience.

“My dad studied abroad when he was my age,” she said, “and I came to college knowing it was something he wanted me to do and something I wanted to do.”

She spent six weeks in Verona, Italy studying through the UGA Center for the Study of Global Issues, or Globis, program. The best part of learning abroad “for me was getting to see how people live in another country,” Richter said. “It was so different. I’m from Atlanta where everyone has a car. In Verona, people walk a lot. They take buses. The city had a small town feeling.”

Richter’s experience is echoed by thousands of UGA students, said Pandit, who as a parent has “seen the changes in my own daughter who spent a few weeks in Spain. She’s opened up and become more self-critical in a positive way. Students returning from a study abroad experience begin looking at their old lives differently.”

Change due to studying abroad isn’t limited to UGA students. The university sponsors more than 100 programs (running 60 to 80 of them in any given year) in 39 countries—including an every-other year trip to Antarctica—and faculty lead most of them.

“Teaching abroad opens up a lot of research opportunities for our faculty,” said UGA study abroad director Kasee Laster. “I’ve had many faculty tell me that teaching abroad was the most personally satisfying and meaning opportunity of their careers.”

As study abroad participation by both students and faculty increases, students are exploring less traveled countries in Africa and Latin America. Traditionally, Laster said, most students had studied abroad in Italy, Great Britain and other European countries.

But study abroad changes aren’t limited to country diversity. Students in a greater variety of majors are learning globally as well.

Typically, the STEM fields—science, technology, engineering and medicine—are so structured that undergraduates had felt they didn’t have the time or ability to take their education beyond campus grounds. That’s changing, said Carolina Robinson, the study abroad coordinator in the UGA College of Agricultural and Environmental Sciences.

“We have 11 to 14 programs, depending on the year, and they’re all science-based,” she said.

Through the college’s certificate program in international agriculture, she’s had an engineering major study in Spain and a pre-vet student study in Thailand. Numbers of exchange students in the college are also increasing from an average of two to 10 this upcoming spring.

Through UGA, even short-term experiences are going deeper than the global lecture hall. Quint Newcomer, director of UGA Costa Rica, led a group of graduate students and faculty from the UGA College of Environment and Design and the Nanjing Forestry University in China as they worked with the mayor and community leaders in Santa Elena, Costa Rica on a sustainable design for its downtown.

Santa Elena has experienced explosive growth over the past several years; the town’s bus stop and taxi stands were so busy that they were blocking off a major thoroughfare. Town leaders recognized the problem and asked UGA for help. Working together, they came up with a design for the relocated central bus terminal, taxi stand, a network of small parks and a pedestrian greenway.

“Within a week, they had produced a phenomenal design,” Newcomer said. “It was an amazing cross-cultural sharing experience.”