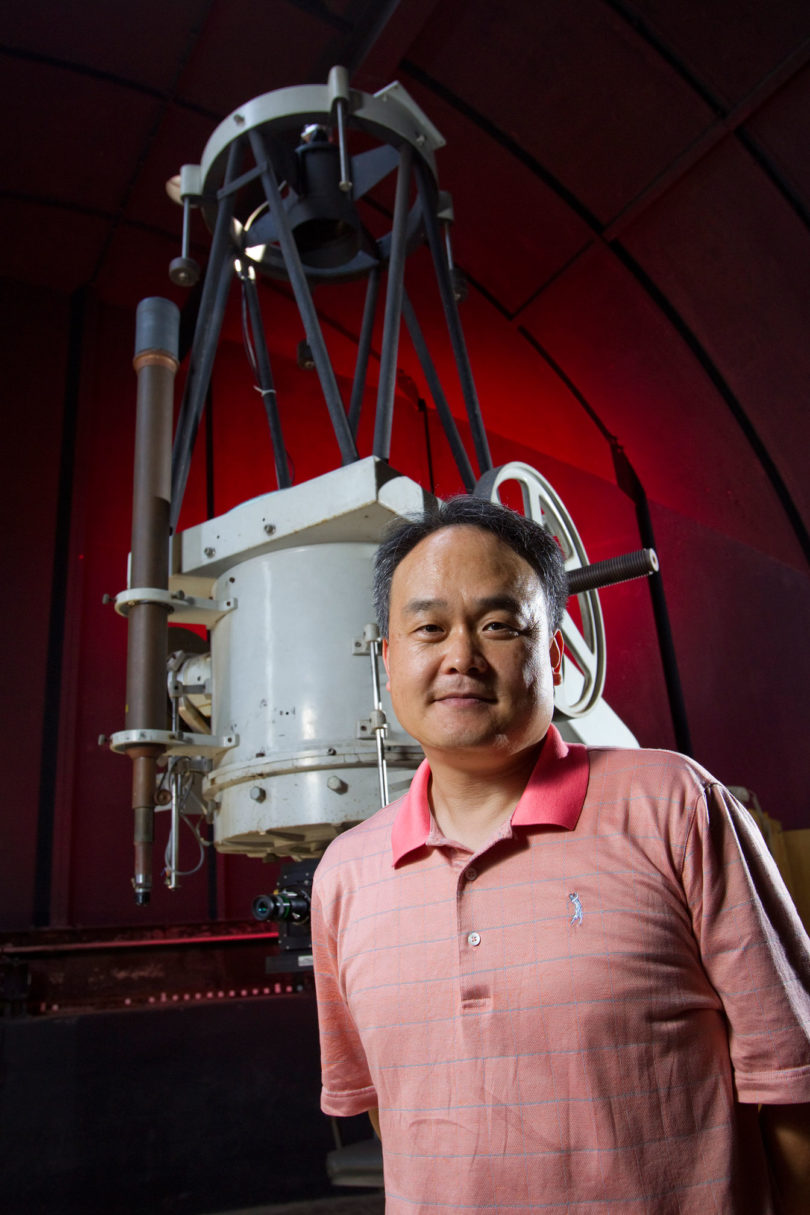 Athens, Ga. – A study published in the July 5 edition of the journal Nature is challenging scientists’ understanding of planet formation, suggesting that planets might form much faster than previously thought or, alternatively, that stars harboring planets could be far more numerous.

“The most commonly accepted time scale for the removal of this much dust is in the hundreds of thousands of years, sometimes millions,” said study co-author Inseok Song, assistant professor of physics and astronomy in the UGA Franklin College of Arts and Sciences. “What we saw was far more rapid and has never been observed or even predicted. It tells us that we have a lot more to learn about planet formation.”

Lead author Carl Melis, a postdoctoral fellow at UC San Diego, said, “It’s like the classic magician’s trick: Now you see it, now you don’t. Only in this case we’re talking about enough dust to fill an inner solar system, and it really is gone.”

The scientists first identified their star of interest by examining data from the Infrared Astronomical Satellite, or IRAS, which surveyed more than 96 percent of the sky in 1983. The star, known as TYC 8241 2652 1, was surrounded by a cloud of dust that was identifiable by its distinctive radiation of infrared energy. Like a skillet absorbing heat and then radiating it, the dust cloud was absorbing energy from the central star and radiating it in the infrared range. This warm dust is thought to be the raw material from which planets form, but scientists don’t have a clear understanding of how long the process takes.

The scientists observed the same star in 2008 using a mid-infrared imager at the Gemini South Observatory in Chile and again with the same ground-based telescope in 2009. The 2008 observation revealed an infrared emission pattern similar to the 1983 measurement, but something surprising happened in 2009: The infrared emission dropped by nearly two-thirds. NASA’s Wide-field Infrared Survey Explorer, or WISE, looked at the same star again in 2010, and the scientists found that the dust had mostly disappeared. The scientists confirmed their findings using two additional telescopes, the Japanese AKARI telescope and the European Space Agency’s Photodetector Array Camera and Spectrometer, or PACS, at the Herschel Space Observatory, and the pattern held.

“It’s as if you took a conventional picture of the planet Saturn today and then came back two years later and found that its rings had disappeared,” said co-author Ben Zuckerman of UC Los Angeles, who has been investigating circumstellar disks since the 1980s.

The researchers explored several different explanations for how such a large quantity of dust could disappear so rapidly, and each of their explanations challenges conventional thinking about planet formation.

Runaway accretion. The most commonly held theory of planet formation is that minute particles of dust left over after a star forms clump onto each other, first through weak electrostatic interactions and later through gravitational forces. The aggregated dust particles eventually grow to become pebble-sized and then car- to house-sized objects. Ultimately, they become planets. The timescale at which this accretion occurs has been theorized and modeled mathematically, and Song said it is commonly thought to occur over hundreds of thousands of years, a time period that spans civilizations on Earth but is an astronomical blink of an eye.

“If what we observed is related to runaway growth, then our finding suggests that planet formation is very fast and very efficient,” Song said. “The implication is that if the conditions are right around a star, planet formation can be nearly instantaneous from astronomical perspective.”

The star that the scientists observed is 450 light years away, however, which means any planet formed would not be visible with today’s technology.

Song added that a slightly different version of the “runaway accretion” theory suggests that dust grains accrete onto the central star in a very short timescale, implying that the star effectively eliminates planet-building material. If such events occur frequently, planet formation is much less likely than previously thought.

Collisional avalanche. Another explanation for the sudden disappearance of the dust is that it was expelled from the sun’s orbit. Song explained that the particles are so small-a hundred times smaller than a grain of sand-that the constant stream of photons emanating from the sun could push them away and into each other, like pinballs, until they leave the suns’ orbit.

Because large clouds of dust can be formed when orbiting planets crash into each other, astronomers have often viewed the presence of such clouds as indirect evidence of unseen planets. If clouds of dust are only fleeting, however, then many more stars than previously thought could harbor planets.

Next steps. Like many important discoveries, the scientists’ finding raises more questions than it answers. Song said his colleagues now aim to compare measurements from 1983 with data from modern telescopes to systematically search for other stars that have rapidly depleted—or replenished—their dust clouds. The goal is to understand the frequency with which these processes occur and, ultimately, to advance understanding of how planets form.

“Many astronomers may feel uncomfortable with the suggested explanations for the disappearance of the dust because each of them has non-traditional implications,” Song said, “but my hope that this line of research can bring us closer to a true understanding of how planets form.”

The study was supported by the Lawrence Livermore National Laboratory, the National Science Foundation and NASA.