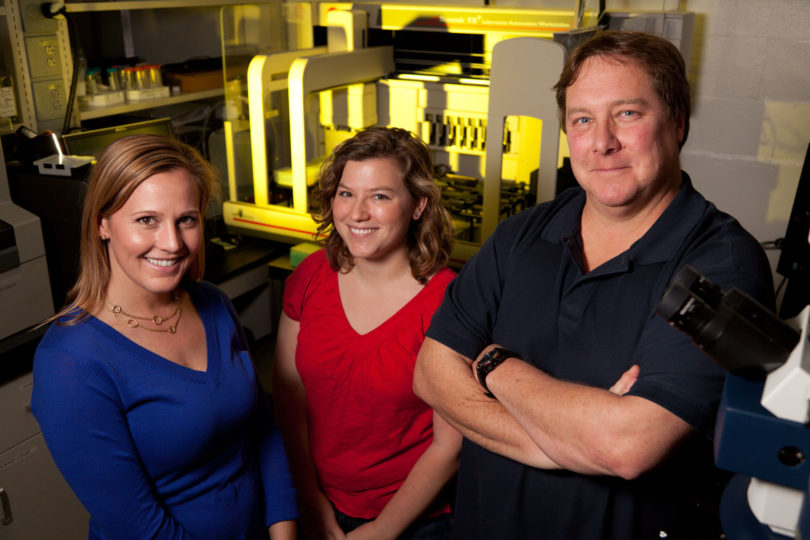 Athens, Ga. – Influenza virus can rapidly evolve from one form to another, complicating the effectiveness of vaccines and anti-viral drugs used to treat it. By first understanding the complex host cell pathways that the flu uses for replication, University of Georgia researchers are finding new strategies for therapies and vaccines, according to a study published in the January issue of the Journal of the Federation of American Societies for Experimental Biology.

All viruses act as parasites by latching onto healthy cells and hijacking the cells’ components, essentially turning the cell into a factory that produces copies of the virus. This process begins when influenza binds to sugars found on the surface of host cells in the lung and respiratory tract. Once attached, the virus downloads its genetic information into the nucleus of the cell, and virus replication begins.

“Viruses contain very minimal genetic information and have evolved to parasitize host cell machinery to package and replicate virus cells. Because virus replication is dependent on host cell components, determining the genes needed for this process allows for the development of novel disease intervention strategies that include anti-virals and vaccines,” said study co-author Ralph Tripp, a Georgia Research Alliance Eminent Scholar and Chair of Animal Health Vaccine Development in the UGA College of Veterinary Medicine.

“We have the technology today that allows us to target specific genes in human cells and silence those genes to inhibit the production of virus in the cells,” he said.

RNA interference, which was first discovered as the mechanism that effects color change in petunia breeding, is now being applied to medical advancements. Using RNAi silencing technologies, Tripp’s lab was able to identify key host cell pathways needed by influenza virus for replication.

“We have a very limited toolbox for treating influenza,” Tripp said. “There are two medications currently used to treat flu infections, but virus resistance has developed to these drugs. Our studies have identified several novel host genes and associated cell pathways that can be targeted with existing drugs to silence virus replication.”

Understanding which genes can be silenced to inhibit growth of viruses opens the medicine cabinet for the repurposing of existing drugs.

Existing anti-viral drugs slow influenza virus replication by preventing the virus from releasing itself from its host cell. These treatments target the virus, which is able to rapidly mutate to avoid drug sensitivity. In contrast, drugs that target host genes work more effectively because host genes rarely change or mutate.

“If we target a host gene, the virus can’t adapt,” Tripp said. The influenza virus “may look for other host genes in the same pathway to use, which may be many, but we have identified the majority of preferred genes and can target these genes for silencing.”

The influenza A virus has eight single RNA strands that code for 11 proteins. Recent studies suggest it may need several dozen host genes to reproduce. Turning off the apex, or signaling, gene can cause the reproduction sequence to stall.

“Through this research we can repurpose previously approved drugs and apply those to influenza treatments, drastically reducing the time from the laboratory to human medicine,” said Victoria Meliopoulos, a UGA graduate student and co-author of the study. “We can manipulate the cellular microenvironment to increase the viral yield during vaccine manufacturing.”

Meliopoulos said these discoveries can be used to create new anti-viral drugs and develop better vaccines that can be used to treat patients with influenza. This technology also can be used to improve medications for other viruses like hepatitis and polio.

The technology allows the researchers “to establish a comprehensive roadmap of human genes modulated during influenza virus infection to better understand these disease mechanisms and to identify novel targets for anti-influenza therapy,” said Lauren Andersen, a UGA graduate student and co-author of the study.

Influenza is the world’s leading cause of morbidity and mortality; seasonal viruses affect up to 15 percent of the human population and cause severe illness in 5 million people a year, according to the Centers for Disease Control and Prevention. In the U.S., financial losses caused by seasonal influenza are estimated to exceed $87 billion annually.