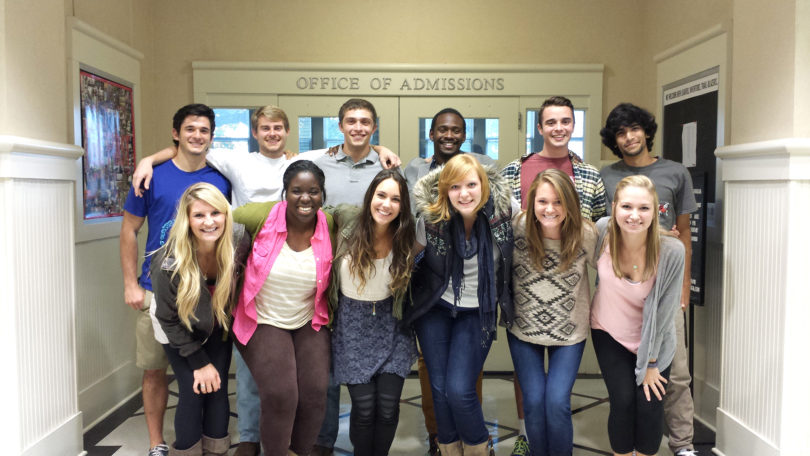 Athens, Ga. – Twelve University of Georgia undergraduates have been selected by the Office of Undergraduate Admissions to serve as orientation leaders during new student orientation in summer 2014.

Orientation leaders are typically the first points of contact and help prepare first-year and transfer students for fall semester by sharing their own academic and campus experiences. Through memorable skits and songs the orientation leaders provide new students with a high-energy, upbeat and positive welcome to campus. In addition, the leaders serve as an important resource for parents and families who may also attend orientation.

“We are very proud of the team of students who will come together to serve as our 2014 orientation leaders,” said Kelsey Marcero, associate director of admissions and director of new student orientation. “After a highly competitive interview process of more than 135 applicants, selection for this year’s team was difficult. Each of the twelve students brings a unique perspective to the group that will allow them to share their passion for the UGA experience and help new students get their strongest possible start.”

Marcero hails from Clemson University and is a former high school teacher and school counselor. She has been with the Office of Undergraduate Admissions since 2012 and became the new director of orientation in July. Michael Cabe, assistant director of admissions, will assist Marcero with the summer freshman orientation program. Cabe has worked in the UGA admissions office for nearly four years, and is approaching his third year in the freshman orientation program. Together the duo hopes to continue to build upon the tradition of excellence of the new student orientation program developed by strong leadership over the last several years.

The six men and six women, who are rising juniors and seniors, were chosen for their strong communication skills, leadership abilities and enthusiastic campus spirit.