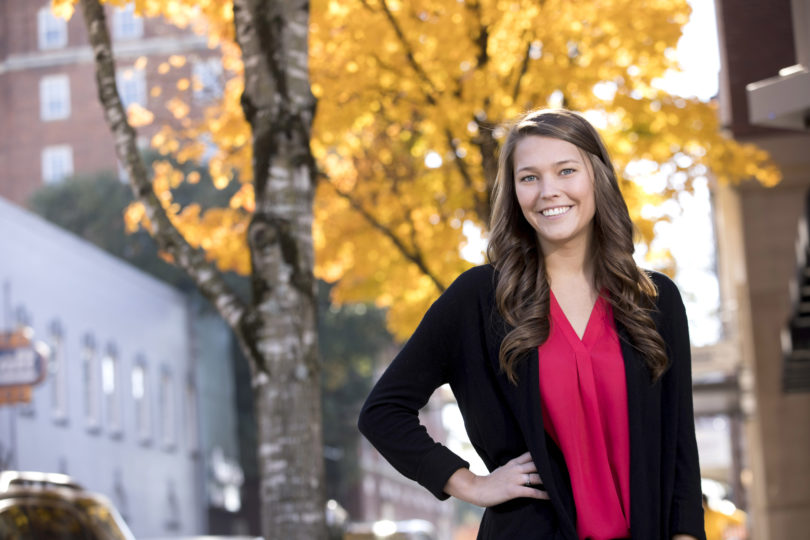 During her time at UGA, Summer Roberson has experienced underserved communities both locally and as far away as Africa, leading to a passion to provide health care to those who do not have proper access.

I’ve been working at a restaurant, Clarke’s Standard, since it opened in February 2016. It’s my second home, and the staff is family! My favorite shift was when I served a large group of 60-year-old British men that stayed in Athens for the Masters Tournament. They made the trip to Augusta for the first days of the tournament and remained in Athens for the last day. They stayed my entire shift, and it was a blast. I have had countless unforgettable shifts and have loved working in the service industry.

My uncle played nose guard for Georgia from 1984-1988 (Vince Dooley nicknamed him “Stump”!). My aunt also attended UGA, and my cousin just graduated from vet school here. There’s only a few of us, but if you witnessed my family’s pride for the Dawgs, you’d think every single member attended UGA!

B.S. in biology, B.S. in psychology

Minor in African languages and literature

When I attended orientation the summer before freshman year, I was in Darby Miller’s Firework Five orientation group. She told us one of the reasons she loved her orientation number was due to the significance of the fireworks. UGA’s acceptance page shoots fireworks, and fireworks are shot after the graduation ceremony each year. They represent the beginning and the end of your time as an undergrad at this university. Sitting in that classroom, I could have never imagined the incredible experiences and opportunities UGA would bring my way.

I joined Zeta Tau Alpha my freshman year alongside a pledge class of 70 incredible young women. I was the first person in my family to join a sorority, so I had no idea what I was getting myself in to and debated attending recruitment until the day it started. Since then I have served on the Programs Council as intramural chair and on the Philanthropy Board. I spend my time surrounded by women that I respect and admire whether they be girls my age, in the pledge classes above/below me, or alumni. We support each other more than I could have ever anticipated. The experiences I had within my sorority encouraged me to get involved in several other areas on campus.

The summer following freshman year, I studied abroad in various locations in Australia and New Zealand. My cohort included students of all ages and majors. Lectures while hiking through Carnarvon Gorge and presentations that require you to snorkel through the Great Barrier Reef are about as fun as class can get. My study abroad sparked my passion for traveling and immersing myself in other cultures.

The following winter break, I traveled with MEDLIFE, a nonprofit organization that I am a member of at UGA, to Tanzania, Africa. MEDLIFE provides medical aid and education to low-income areas in various countries as well as locally in Athens-Clarke County. This was — without a doubt — one of the most rewarding experiences I will take from my time as an undergraduate. I spent the week teaching children how to brush their teeth, assisting Tanzanian nurses and pharmacists, and shadowing Tanzanian doctors. I got to do all this alongside an astounding group of UGA (and a couple of Kansas University) students. My long-term goal to provide health care in East Africa came while sitting on a mountain side surrounded by those incredible people.

The summer following sophomore year I returned to Africa with Agape Volunteers. I taught science classes to grades three to six in the slums surrounding Nairobi, Kenya. I was placed in Gladways Mercy School under Mary Wamaitha. The goal of the volunteers was not only to educate, but also to foster a sense of family and community to the students since most have lacked this all their lives. My Swahili abilities were only somewhat past the elementary level at the time, so my classes loved making me their student to improve my language proficiency. One day a week, the volunteers also performed development initiatives by painting clinics and building desks for schools. Volunteers came from all over the world. My temporary home housed forever friends from Brazil, Ireland, United Kingdom, Lithuania and Russia. It was such a blessing to witness the world coming together to serve others.

In my time at Georgia, I also got the privilege to do undergraduate research with the UGA Infant Lab under associate professor Janet Frick — an incredible professor and Dawg fan. During my year in the lab, we examined short-term memory development in infants from ages 5 months to 8 months. A highlight of every week was meeting and interacting with the parents, participants and participants’ siblings. My experiences in the lab better prepared me for medical school and cultivated a desire to continue doing research in the future. On top of that, I was able to form lasting friendships with the other research assistants and Dr. Frick.

Since I could talk, I was going to the University of Georgia to be a Dawg. I grew up in a very small town and couldn’t wait to attend a university with 37,000 students I could connect with. My campus tour confirmed it; I was in love. The community here is astounding, and you can feel it as soon as you set foot on campus. The culture of Athens, Georgia, is incomparable to any city I’ve traveled to (and that’s a lot!). I honestly don’t know what I would’ve done if I had not been accepted because I did not have a backup plan — it was the University of Georgia or nowhere. 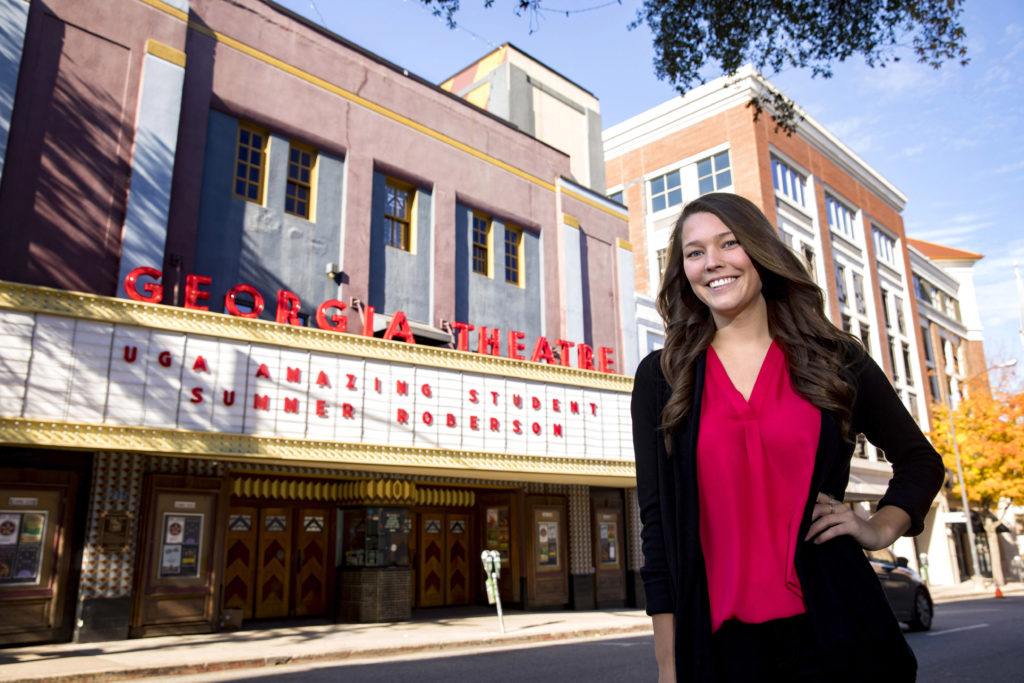 Nothing can beat a Saturday in Athens, but outside of Sanford Stadium, my favorite thing to do is be outside with people I love. Sophomore year, I’d step off the Milledge bus and go straight to the Zeta lawn. It wouldn’t be long before we’d have 10 girls sitting in rocking chairs, kicking a soccer ball or playing cards. Now my friends and I will grab a pizza and walk to lay in the grass on North Campus. It’s easy to appreciate your university when it’s as beautiful as UGA.

This is UGA! Who here ever has free time … just kidding (kinda)! I spend most of my downtime watching and rewatching “Friends” on Netflix. My roommates and I eat loads of Mexican food — Taqueria del Sol or La Parrilla depending on the day. I try to balance all the cheese dip by running, and I am currently training to run the Disney World Half Marathon. I’ll also attend every concert that I can at the Georgia Theatre with the Clarke’s staff or my roommates.

Hmm, I’ll organize by country. In America, I went skydiving with my older brother on Amelia Island in Florida. My mouth was wide open with excitement the entire time, and I’ve got some hilarious pictures to prove it. While studying abroad in New Zealand, I went bungee jumping with a group of friends. One time wasn’t enough, so I did the world’s highest cliff jump twice. My most permanent endeavor occurred in Kenya. I got a tribal tattoo on my forearm in the Maasai Mara. Tattoo is a very loose term! I essentially let the Maasi brand me twice with a small burning stick. My parents weren’t thrilled about that one! Next, I want to summit Mount Kilimanjaro in Tanzania.

I have two that I love, and you can find me in one of these spots 10 times out of 10. For more intense studying, I’m in the Miller Learning Center, on the fourth floor, in the west wing, on the right side, at the end tables with plugs, facing the giant window with Allison Fagan by my side! Oddly specific, but it’s been our spot for years. For more relaxed studying, I’m in Walker’s Coffee & Pub downtown. My friends and I call it the mixing pot of Athens because you’ve got locals, undergrad students and grad students all meshed together to give Walker’s its distinct atmosphere.

I have had some incredible teachers at this university, and many of those I’ve fostered great relationships with. However, I may have never survived college if it weren’t for Karl Espelie. Dr. Espelie spoke at my freshman orientation about his entomology course and being a pre-med advisor. I heard nothing but great things, so I set out on a mission and basically forced him to advise me! Saying Dr. Espelie goes above and beyond for his students is an understatement. I’ve called him crying over test grades on multiple occasions, and his constant support and encouragement is unsurpassable. If you ever get the privilege of meeting Dr. Espelie, ask him how many weddings and white coat ceremonies he has attended for his past advisees!

Dainess Maganda is also on the list of favorites. I have taken a course with her almost every single semester, and if you’ve been blessed enough to have Dr. Maganda as a professor, you know why. She lights up every room she walks in, and her positive outlook on life is contagious. A course with her means endless laughter, an incredible teaching style, and always ending class with a thought for the day.

… Walt Disney. After constructing Disneyland, he was encouraged to retire but never would. When asked why, Disney responded, “Maybe it’s because I can still be amazed by the wonders of the world.” Disney was persistent in his dreams and once he worked hard to complete a goal, he’d create a new one. I would love to hear about his journey creating and overcoming all that he did.

… open a hospital in East Africa. It would never turn a patient away and have a mobile unit that could travel to those that couldn’t reach the hospital.

… travel. I would go anywhere and everywhere for as long as a travel visa would allow it.

After experiencing underserved communities both locally and abroad, I am passionate about providing health care to those who do not have proper access. I understand that no two stories are the same, and I aim to become a physician that is compassionate and dedicated to bettering the lives and health of my patients.

… volunteer as an EMT until I (fingers crossed) go to medical school. My original plan was to be a pediatrician, but now I’m juggling between pediatrics, orthopedics or emergency medicine.

My favorite UGA tradition is lighting up the stadium at the beginning of fourth quarter. I will never forget lighting up Sanford for the last time against UMass. I couldn’t stop the tears, knowing that the next night I’d be in Sanford would be for my college graduation.