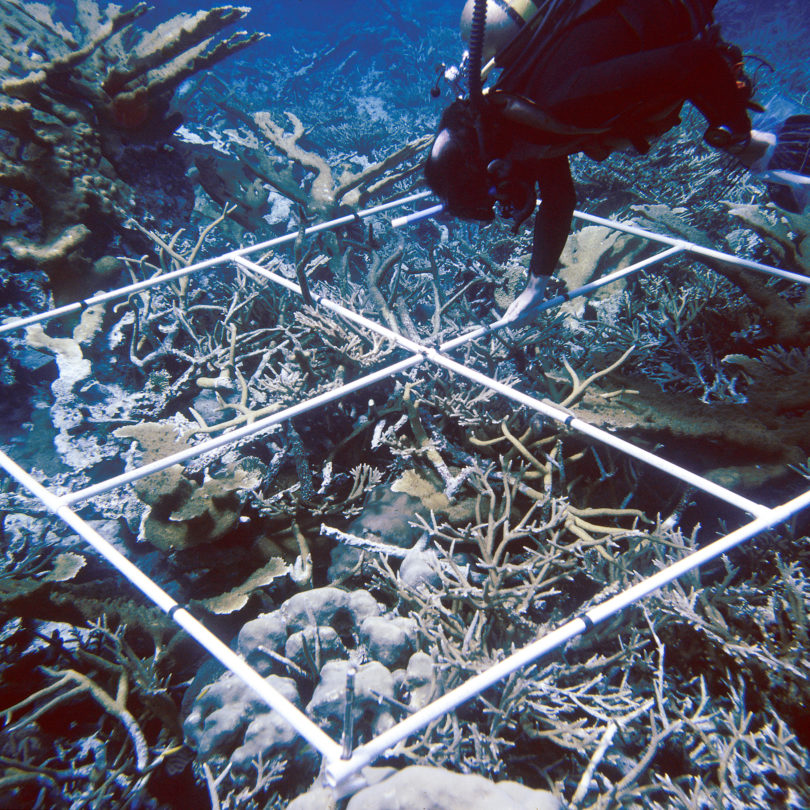 Athens, Ga. – When the documentary “Chasing Coral” premieres at the Sundance Film Festival on Jan. 21, University of Georgia ecologist James W. Porter will be there—not as an audience member, but as part of the film’s cast and crew. Porter, whose contributions to the film include a series of early underwater photographs of coral reefs documenting change, will be on hand to provide scientific context and help field questions after all six screenings of the film.

“Chasing Coral” follows scientists charting the loss of coral reefs around the world. It was directed by Jeff Orlowski, whose award-winning 2012 documentary “Chasing Ice” examines the impacts of global warming on Arctic glaciers.

“Chasing Coral” focuses on the spread of coral bleaching, a phenomenon caused by rising ocean temperatures. When the water becomes too warm for them to tolerate, the symbiotic algae that normally inhabit coral die off, revealing the coral’s bone-white limestone skeletons underneath. Because corals can’t survive for long without the algae, bleaching often leads to coral death.

And although coral reefs make up only 1 percent of the world’s oceans, they are critically important ecologically and economically, according to Porter, an emeritus professor in the UGA Odum School of Ecology. Coral reefs support more biodiversity than tropical rainforests, serving as home to roughly 25 percent of marine life. They also buffer shorelines from storms, helping prevent coastal erosion and provide economic benefits from tourism and fishing.

“When Jeff Orlowski asked if I would give him an interview about the future of coral reefs, I jumped at the opportunity,” said Porter. “I’ve spent my entire career documenting coral decline and the effects of global warming on coral reefs, and I want this message to get out. I had seen ‘Chasing Ice,’ and I hoped he would bring this story to life in the same way—and he has.”

Porter’s photographs provide a “before” and “after” glimpse of the coral reefs of Discovery Bay, Jamaica, which he began photographing in 1976. He established 13 permanent photo stations across the bay, marked with stainless steel stakes to ensure that future photographs precisely captured the same locations. He conducted his photo survey of the area for 10 years, amassing an archive of 5,000 shots with detailed notes for each.

One of 16 films in the Sundance U.S. documentary competition, “Chasing Coral” is also part of the New Climate section of the festival.

“Over my professional lifetime, coral reefs worldwide have lost 30 percent of their living coral,” Porter said. “Our own work in Florida has documented a 50 percent loss of Keys coral since 1996. Hot oceans are killing coral reefs.”

Porter said he hoped that the film would raise awareness among the general public and prompt action to reduce greenhouse gas emissions.

“Pictures tell the story in a way that quoting facts and figures can’t,” he said. “I hope that people who see this film take the message to heart.”

For more information about “Chasing Coral,” see www.chasingcoral.com. For more about the Odum School of Ecology, see www.ecology.uga.edu.