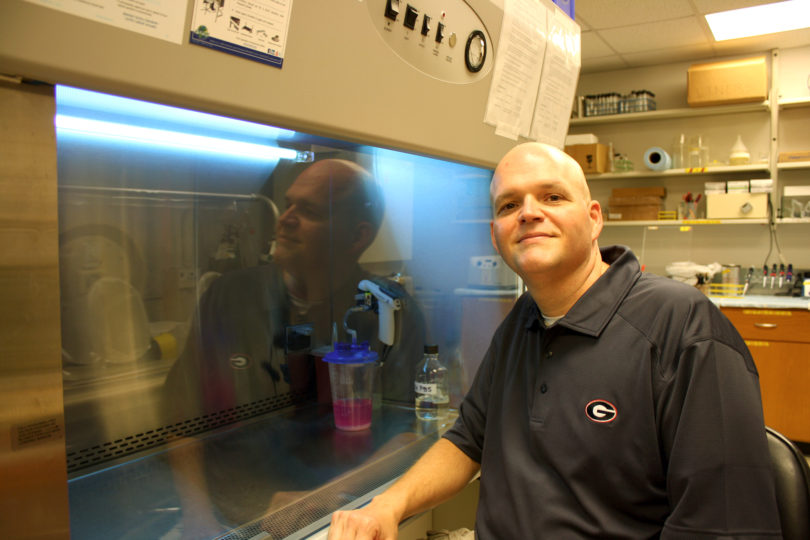 Athens, Ga. – Drug-resistant organisms, or so-called “superbugs,” are a growing public health threat because “last-resort” therapeutics-employed only when other drugs fail to kill an infection-are failing. A University of Georgia-led research team is the first to examine multiple strains of one of the most dangerous superbugs known to science and a last-resort antibiotic used to treat it. The team’s discovery deepens the understanding of how pathogens adapt to protect themselves from antibiotics and will enable researchers to develop therapeutics aimed at evading this mechanism.

M. Stephen Trent, in the College of Veterinary Medicine’s Department of Infectious Diseases, and his team found that several strains of the Gram-negative bacterium Acinetobacter baumannii are mutating into drug-resistant bacteria by shedding a layer of their outermost membrane in response to exposure to colistin, also known as polymyxin E, a decades-old antibiotic. The bacterium inactivates production of an essential molecule that colistin is designed to bind to, which then prevents the drug from entering the cell to neutralize the infection-suggesting that the bacterium adapted a novel mechanism to protect itself.

Previous research isolated this behavior to a single strain of A. baumannii, but this study is the first to track multiple strains and determine that colistin-resistance is a response to treatment. Trent and his team chose colistin for the study not only because it represents the end of the line for bacterial infection treatment options, but also to understand how Gram-negative bacteria like A. baumannii survive without that essential cell wall molecule-called lipopolysaccharides, or LPS.

“Bacteria are phenomenally adaptive, and if the antibiotic can’t bind to or enter the bacterium, it is not effective,” said Trent, the UGA Foundation Distinguished Professor of Infectious Diseases. The theory is, if scientists better understand how bacteria become superbugs, scientists can develop effective antibiotics to combat the bugs’ resistant mechanisms.

A. baumannii, also known as “Iraqibacter” because soldiers acquired infections from the organism in Iraq and brought them back to the U.S., is particularly hard to kill due to its ability to quickly acquire multidrug resistance. It often wreaks havoc in hospitals where it jumps quickly between patients and hospital personnel in close proximity.

Colistin resistance was rare, but has become more prevalent. Colistin has been used since the 1950s, but because of its adverse side effects, is only used as a last-resort option. Because its use is not widespread, most bacteria are susceptible to colistin. Therefore, when colistin proves ineffective in treating an infection, health care providers are out of options.

Data from the Trent team’s study suggest that half of the strains exposed to colistin shed their protective LPS layer. The researchers also found that not all A. baumannii can survive without that protective LPS layer. While some strains thrived without that armor and successfully resisted treatment with the antibiotic, other strains could not. For those strains that did survive without LPS, after the antibiotic was removed from the system, the bacterium produced a new protective layer.

“In effect, the bacteria can quickly adapt to any situation making them even more dangerous,” Trent said.

The study, “A penicillin-binding protein inhibits selection of colistin-resistant, lipooligosaccharide-deficient Acinetobacter baumannii,” was published in Proceedings of the National Academy of Sciences on Sept. 28.