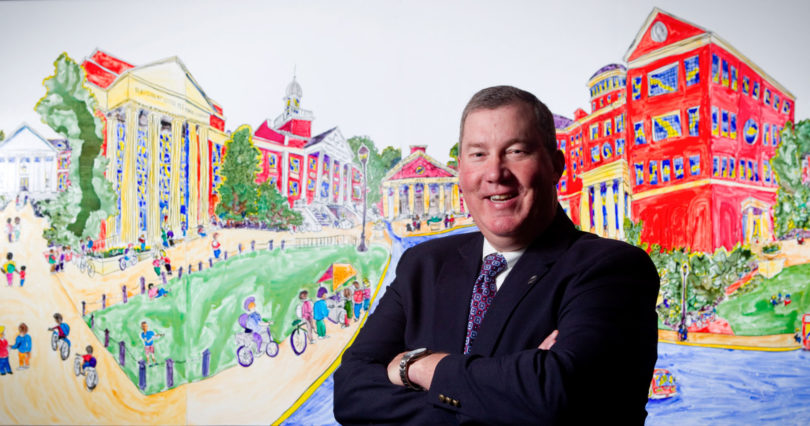 Bill McDonald came to UGA a year ago from Presbyterian College

Bill McDonald has been the dean of students for a year now, but you wouldn’t know it by having coffee with him.

During the short trip from his office in the Tate Center to the Bulldog Café, McDonald greets and catches up with every UGA employee he sees, and many students too, as if they were old friends.

That kind of warmth and interest is astounding for anyone, especially before they’ve had coffee; but for McDonald it’s more than just a byproduct of his good-natured personality. It’s part of his job.

“I have two primary focuses as dean. I meet with student groups and other groups that deal with the student experience on campus, and I’m accessible to individual students,” he said. “I recently did a freshmen forum with members of the Student Government Association and heard from 15 students there, and I’ll meet with them later this year to see how things are going.  That’s why I’m in the Tate Center, instead of up the hill with the administration. This is the living room of student life on campus.”

Seeing the university from both an institutional and a student perspective is essential for McDonald’s goals of enhancing the educational experience at UGA. As dean, he oversees a number of departments including Greek Life, the Office of Judicial Programs, the Center for Leadership and Service, the Center for Student Organizations, Campus Reservations, the student radio station WUOG-FM, the Student Government Association, University Union, the Tate Student Center and Intercultural Affairs.

“The whole purpose (in creating this position) was to separate some responsibilities from the vice president for student affairs, and to have someone on campus who would be approachable and accessible to students to take up their concerns,” McDonald said. “It takes more than just one office to uphold and support our students.”

McDonald came to Athens from Presbyterian College, a 1,300-student private college in Clinton, S.C., where he served as dean of students and vice president for student life. Moving to a larger institution meant taking on new challenges, he said, but after more than 30 years in higher education, he was ready for them.

“Prior to my coming here, when I talked with colleagues, they kept saying how UGA can take a large, complex university and make it have that feel of a smaller campus—and they were right,” he said. “People ask if it’s different coming from a small place like PC, but it’s not that different, despite the number of students. What I find is that students will become heavily involved in some small communities here, like SGA, where they’ll find mentors and fulfilling relationships and a really full experience, while other students find other small communities and do the same thing.”

So far, McDonald has focused on learning the ropes at UGA and building relationships with campus groups. During his second year on the job, he said he plans to extend his reach into individual colleges and schools, to see what support they may need from his office.