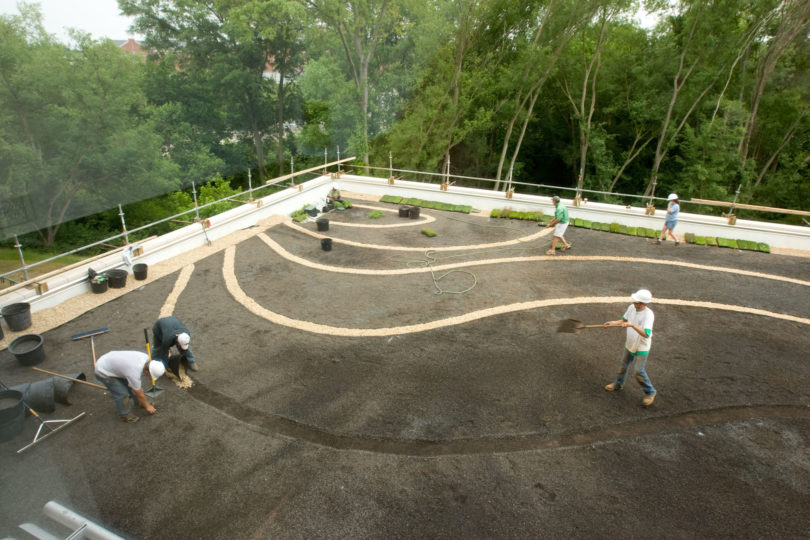 Students working in a printmaking studio in the new Lamar Dodd School of Art building will be able to see something out the window that’s not usually visible from a classroom-a roof carpeted by lush green plants.

The roof, atop a one-story building attached to the south side of the three-story Dodd building, is UGA’s first large-scale, integrated “green roof.”

With deep green foliage and colorful blooms intersected by curving bands of washed gravel, the roof will be a secluded and serene oasis instead of a hot, glaring concrete surface.

But nobody should expect to take sunbaths or grow tomatoes on this roof. Its main function is to help save energy, conserve water and protect the building, and it’s one of the features that make the 172,000-square-foot Dodd building on East Campus one of UGA’s most sustainable structures.

“Green roofs are gaining in popularity and people are more receptive of them but there are still a lot of erroneous images,” said Kevin Kirsche of the University Architects office. “This roof provides an effective educational tool and is also part of an overall storm water management strategy for the site.”

Almost the entire surface of the 3,400-square-foot concrete roof, which tops an auditorium for the Dodd building, is under a blanket of greenery. The vegetation includes nine kinds of plants including a succulent-leafed plant called sedum that thrives in rock outcroppings, ice plant, chives and a native perennial named Rock Pink. Chosen for their hardiness and ability to withstand long dry periods and shallow rocky soil, the plants won’t grow higher than 18 inches and require little maintenance.

They grow in a multi-layered medium that begins with a waterproof membrane over the concrete roof. On top of the membrane are a drainage mat, a root barrier, a capillary mat woven with a grid of fine drip irrigation tubing and felt designed to hold water, and 4 inches of a lightweight soil mix composed of expanded slate, sand and composted worm castings.

Intersecting the green carpet are wavy bands of light-hued gravel. The bands set apart different planting areas, provide pathways for maintenance workers and also are an abstract reference to terracing that farmers once used to minimize erosion, according to Kirsche, who primarily designed the roof.

The roof is visible from printmaking and painting studios on the south side of the Dodd building and from a public stairway in the building. Although attractive and inviting, it’s also off limits. It can be reached only by a ladder from the ground, and only maintenance workers will be allowed access.

There have been a couple of experimental green roofs on UGA buildings that were used primarily for research, but this is the first one specifically designed and built for maximum environmental benefit on a new campus building, according to Kirsche.

“Green roofs help save energy by insulating a building and ­absorbing sunlight, which minimizes glare and the heat island effect,” he said. “They reduce storm runoff because the plants utilize and filter rain. And they help protect the building from debris and harmful ultra-violet rays.”

The roof was added to the Dodd building as part of an overall landscape and storm water management plan for the East Campus Performing and Visual Arts Complex, which also includes the Georgia Museum of Art, the Performing Arts Center and the Hodgson School of Music.

If this roof proves successful, green roofs may be considered as an alternative when roofs on other buildings are replaced, according to Kirsche.