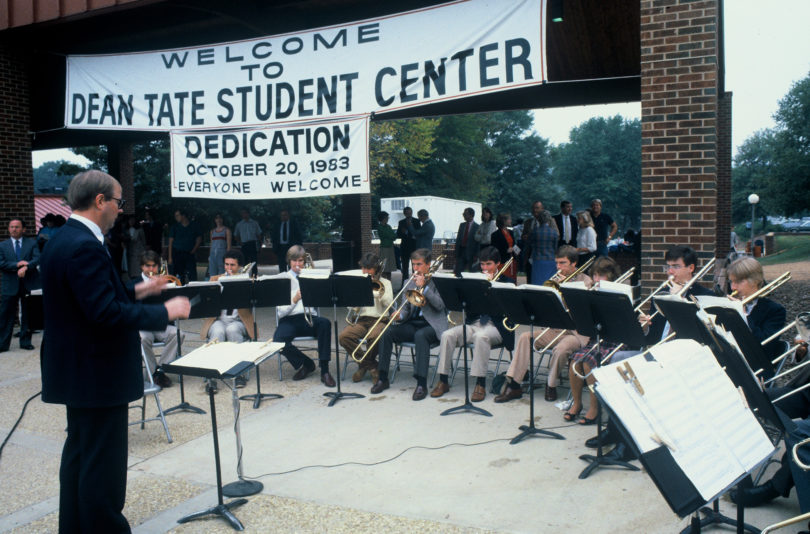 Athens, Ga. – The University of Georgia Tate Student Center will celebrate its 30th anniversary on Oct. 23 with a ceremony and a day of activities for students. The official program is scheduled at 9:30 a.m. on Tate Plaza and is open to the entire UGA community.

UGA President Jere W. Morehead will headline a roster of speakers including Victor K. Wilson, vice president for student affairs; William M. McDonald, dean of students; William F. Thorne, an alumnus from the class of 1984 who participated in the 1981 groundbreaking ceremony; Austin T. Laufersweiler, president of the Student Government Association; and Britney L. McDonald, president of the University Union Student Programming Board.

A hot dog cookout for students will be held on Tate Plaza beginning at 11 a.m. and will include giveaways and 1980s music. Inside the Tate Student Center, there will be video games and billiards as the former Tate Game room is temporarily recreated in the east lounge adjacent to the UGACard Office.

Vintage photography has been on display throughout the building since early October, and a large collection of historic documents, photos and newspaper clippings is hung on the art wall in the building’s atrium.

“For more than 30 years, students have been at the heart of Tate and its driving force,” said Jan Davis Barham, associate dean of students and director of the Tate Student Center. “From the original 1983 facility to the 2009 expansion, students have advocated to legislators and administrators, they have secured the funding and they have given voice to their needs.”

The student center opened in the fall of 1983 after two years of construction. The facility was named in honor of William Tate, who had been dean of men at UGA for nearly four decades. Tate had called for the construction of a new student center as early as 1948 and was instrumental in moving the project forward.

In the event of rain, the program will be held in the Tate Theatre.