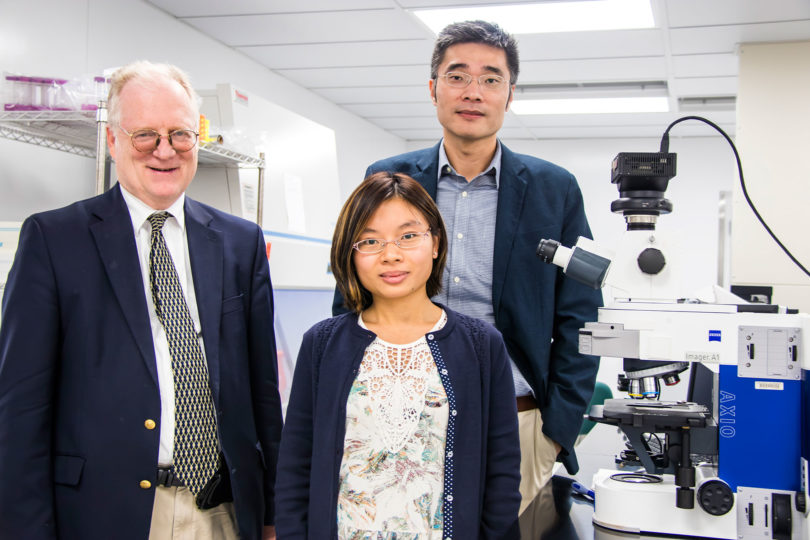 Athens, Ga. — An interdisciplinary team of researchers at the University of Georgia has developed a new technology that may help scientists better understand how an individual cell synchronizes its biological clock with other cells.

While scientists have previously observed synchronization at the macroscopic level of millions of cells, the UGA researchers say this is the first time anyone has been able to observe single cells syncing their circadian rhythms with each other.

Circadian rhythm is a roughly 24-hour cycle in the physiological process of living things, including animals, plants and fungi. This daily cycle is linked to sleeping and feeding patterns, hormone production, cell regeneration and other biological activities.

The new microfluidic technology developed by the UGA researchers—in which individual cells are encapsulated in droplets and tagged with a fluorescent protein—provides scientists with a stable platform to track tens of thousands of cells with single-cell precision, according to Zhaojie Deng, a Ph.D. candidate in the College of Engineering and the lead author of the study. The team’s findings were published online Oct. 27 in the journal Scientific Reports.

In the study, Deng and her colleagues were able to monitor more than 25,000 individual cells of Neurospora crassa, a type of bread mold often used as a research model. Not only did they confirm that many cells had a distinct circadian rhythm, they also observed the individual cells synching their rhythms over time.

The researchers say the new process outlined in the study also will allow scientists to observe and gather data from cells over a longer period of time than has been possible in the past.

“This technology allows us to collect a tremendous amount of data as we try to make sense of the cells’ circadian rhythm,” said Leidong Mao, an associate professor in the College of Engineering and one of the study’s corresponding authors. “We’ve been able to stabilize cells for up to 10 days, while in the past scientists were only able to gather data from individual cells for approximately 48 hours.”

Mao says monitoring large numbers of N. crassa cells is difficult work because each cell is only 10 microns in diameter. By comparison, the average cross-section of a human hair is about 100 microns.

“If you want to measure tens of thousands of individual cells at the same time, each cell must be extremely stable and stay in place for up to 10 days or you lose track of them,” Mao said.

The researchers say their findings may eventually lead to advances in a number of areas where the circadian rhythms of organisms play a role.

“You might want to exploit the biological clock of algae to make biofuel reactors more efficient or you might want to understand the synchronization phenomenon of agricultural pests such as locusts,” said Jonathan Arnold, a professor in the Franklin College of Arts and Sciences’ department of genetics and a corresponding author of the study.

The team’s study provides tools and approaches that might even shed light on the synchronization of cells in the master clock of the human brain, according to Arnold. He notes the behavior of the human master clock has been tied to health problems such as heart disease and cancer.

The full study is available online.