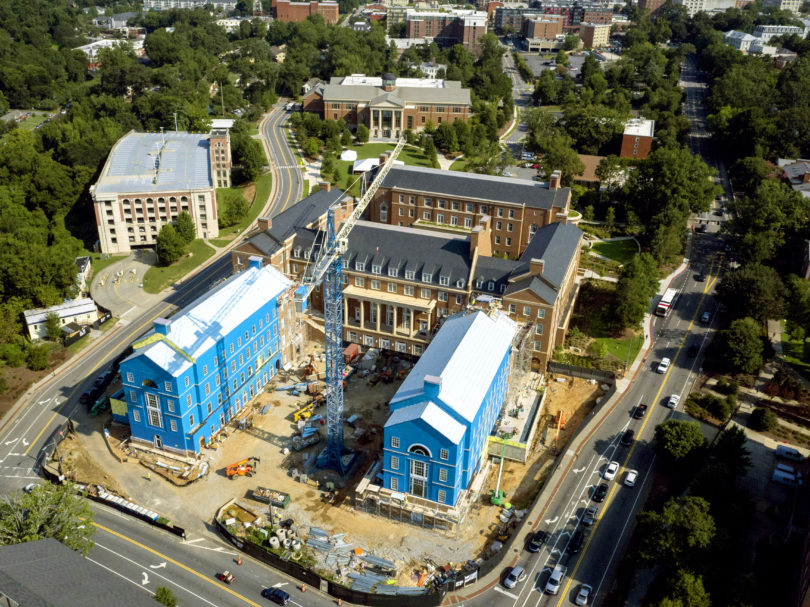 Work continues on Phase III of the Business Learning Community at Baxter and Lumpkin streets. (Photo by Andrew Davis Tucker)

The buildings on the corner of Baxter and Lumpkin streets change gradually each day. Workers add rows of bricks here and hang bay windows and lighting there. When construction of the Business Learning Community is done, the sum total of those 2,000-plus days of incremental progress will add up to a massive transformation for the University of Georgia’s Terry College of Business.

Built in three phases, the complex will include six buildings once construction of the final two buildings is completed next spring. Its design will unify the university’s second largest college into one connected community for teaching, learning, research and service.

“The fact we have everybody here in one location is really a point of pride,” said Asa Smith, a third-year Terry student majoring in real estate. “I know that five years down the road my degree from Terry is going to mean that much more because people want to come here, in part because of this business learning community.”

They are adjacent to Amos, Benson and Moore-Rooker halls (opened in 2017) and Correll Hall (opened in 2015) and, taken together, represent one of the largest capital projects in the University System of Georgia’s history. Totaling $140 million, construction of the Business Learning Community was fully funded through a 50-50 split between the state of Georgia and private donors.

The investment is already paying dividends for business education at UGA.

“I think this place is incredible in many wonderful ways,” said Tina Carpenter, an associate professor in the J.M. Tull School of Accounting. “The buzz and the positivity of being around your students in the commons and the vibrancy of it is all very powerful.”

Casey Commons serves as the learning community’s heartbeat, a 5,000-square-foot hub where a constant stream of students, faculty and staff interact on a daily basis. Classrooms equipped with the latest technology allow professors to multitask lessons with quickness and ease, while students benefit from active learning spaces, such as the Benn Capital Markets Lab and sound-proofed recording studio inside the Music Business Lab.

Donor support was the driving force that made the Business Learning Community a reality. The first phase of construction, Correll Hall, was entirely paid for with private contributions. The cost of Phases II and III was shared by hundreds of donors and public funding from the state. Georgia Gov. Nathan Deal called it “the best example of a public-private partnership that I can think of” during the Phase II dedication ceremony one year ago.

“Sitting in that ceremony and listening to Dudley Moore and Jack Rooker tell their story of how they became such great friends in college was pretty cool because I work in Moore-Rooker Hall,” Carpenter said. “Knowing how passionate they were about their giving could influence the next generation of people who come here and want to give back.”

A dedication for Phase III is scheduled for fall 2019.

Until that time, Terry College’s 9,000 inhabitants—counting students, faculty and staff—will continue to get acclimated to their new home. As will generations to come.

“I had no idea how much we needed it until we got here. The energy level is so high,” said Margaret Christ, an associate professor in the J.M. Tull School of Accounting. “I remember the first time I walked over, just before the newest buildings opened. I came around Correll Hall and saw the veranda and the courtyard fitting together, and it honestly took my breath away. I can’t believe I get to work here.”