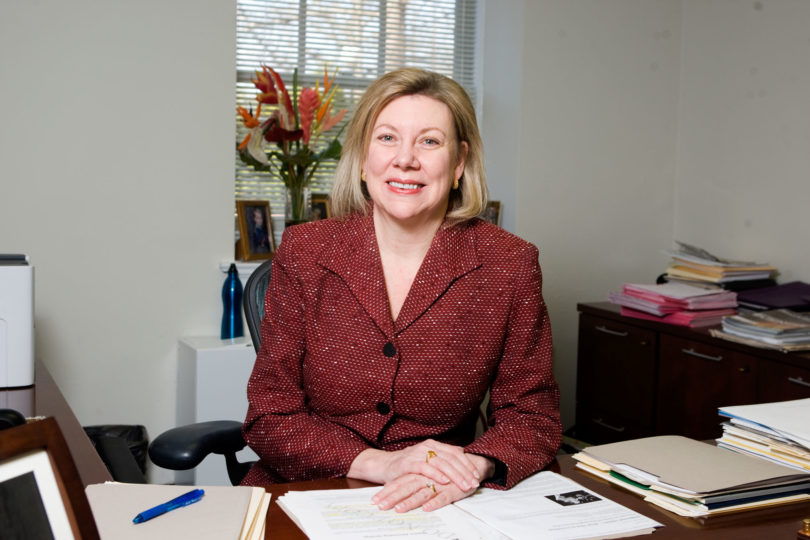 Charlotte Mason directs the Master of Marketing Research program in the Terry College of Business. It is the longest-running program of its kind in the country.

Charlotte Mason was recruited from the University of North Carolina’s Kenan-Flagler Business School to head the Terry College’s marketing department in 2008.

And for her first two years on the job she drove almost every weekend back to the family home in Chapel Hill, N.C., where her son was finishing high school.

But even the distance of her interstate commute doesn’t compare to the miles traveled by most of the students who come to UGA expressly for the Master of Marketing Research program that Mason directs, in addition to her duties as department head.

“The MMR program literally draws people to Athens from around the country, and internationally too,” said Mason, noting the current class attracted students from 14 states in addition to Georgia, from as far north as Minnesota and as far west as California. MMR graduates disperse just as widely when they re-enter the work force, typically joining highly specialized market research firms and multinational corporations from coast to coast.”

“I believe we have the best program going,” Mason said. “It’s certainly the longest running.”

UGA was the first university to create a master’s program in market research, with the first class of six students enrolling in 1980. The program has stayed small-the current class has 25 students-to maintain the department’s active role helping students land jobs with the corporate partners and marketing agencies that regularly recruit the program’s graduates.

“Including this year’s class, we have had three of the largest classes in program history the past three years,” Mason said. “Last spring, in spite of the economic climate, all of our students had job offers by graduation.”

Graduate degrees in market research have long been a niche program offered by a small number of universities nationally. But, Mason said, new competition is entering the field.

“The program at the University of Wisconsin-Madison was one of the first to be modeled after this one,” she said. “Subsequently, other programs have sprung up, many of which are part-time programs that do not have the same benefits as a full-time residency program. Columbia University just approved a master’s program focused on market research that is a three-semester program like ours. Michigan State is launching a master’s degree in market research this January.”

She attributed the growth in like-minded academic programs to the explosion of detailed marketing data that companies now have at their disposal. All of that digital data is in need of someone to scrutinize and interpret it so that businesses can better target the right customer with the right goods or services.

“I have a Kroger card, as do 40 million other people,” said Mason, who teaches the MMR course in customer relationship management. “If you look in a person’s shopping cart, you can discern something about who they are. Someone who’s got tofu and organic produce-that paints a different picture than somebody who’s got Krispy Kreme doughnuts, Ball Park hot dogs and Doritos.

“If a business is smart, it should be able to use that data for more intelligent marketing, which benefits both the company and the customers. However, if you think about 40 million customers for one grocery store chain, that requires proper analysis of a massive amount of data over time to develop those insights,” she also said.

“That’s why marketing programs everywhere are trying to bolster the analytical side of what they teach. Our department is recognized for that market research expertise, and the MMR program is ideally suited to fill that need in the marketplace.”