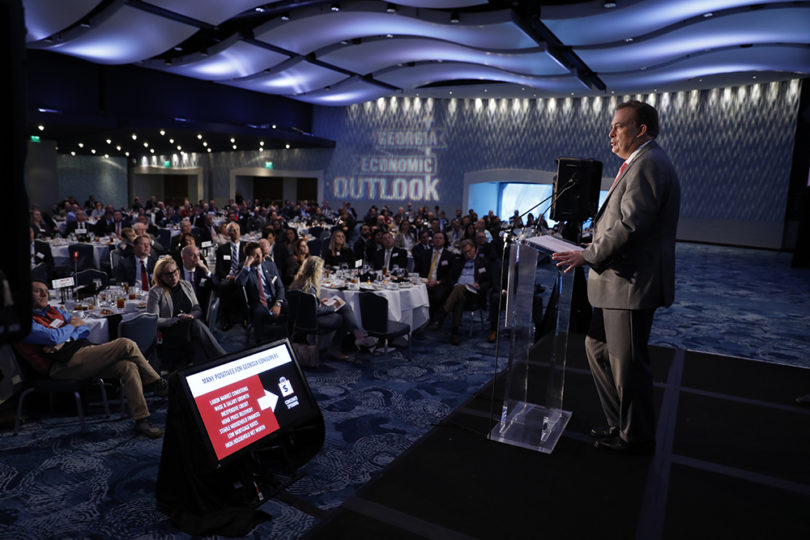 Georgia’s economic growth is forecast to slow substantially in 2020, but not to a complete stop, according to the latest projections from the University of Georgia Terry College of Business.

The state will grow at a slower rate than the U.S. economy – 1% compared with 1.2% estimated for U.S. gross domestic product in 2020 – and create less than one-third of the new jobs that were added in 2019, said Dean Benjamin C. Ayers at UGA’s 37th annual Georgia Economic Outlook in Atlanta.

“Georgia’s prospects for growth reflect the strength of the consumer, more homebuilding, a pipeline full of economic development projects, and the Federal Reserve reversing course and cutting interest rates,” Ayers said. “Despite these powerful economic drivers, the state’s economy will slow down in 2020. The U.S. trade war with China and other trading partners is the main recession risk. And Georgia faces greater exposure to the trade war than most other states.”

Ayers delivered the annual forecast Dec. 11 to an audience of about 600 business leaders, government officials and chamber delegates. The forecast is based on the Georgia Economic Outlook report, produced by UGA’s Selig Center for Economic Growth. The complete forecast is available for purchase at terry.uga.edu/about/selig/.

Consumers will be the guiding light of the 2020 economy, buoyed by modest wage growth, available credit and rising home values, Ayers said.

“Consumer spending will increase because labor market conditions are good,” he said. “As long as job creation remains positive, the economy will operate close to full employment. Credit is inexpensive, and household finances are in very good shape. Many homeowners have locked in historically low mortgage rates.”

“Appreciating home values will give people the confidence to buy homes,” he added. “In the third quarter, Georgia’s existing home prices were 20 percent higher than their pre-recession peak. Another factor that will encourage people to buy homes is that rent affordability is at an all-time low.”

But further escalation of trade tensions with the United States’ major partners will end the decade-long economic expansion, according to the forecast.

“A quick and decisive de-escalation of the trade war would substantially reduce the risk of a 2020 recession,” he added. “Nevertheless, there is a point where de-escalation comes too late to stave off a recession. We are close to that point.” 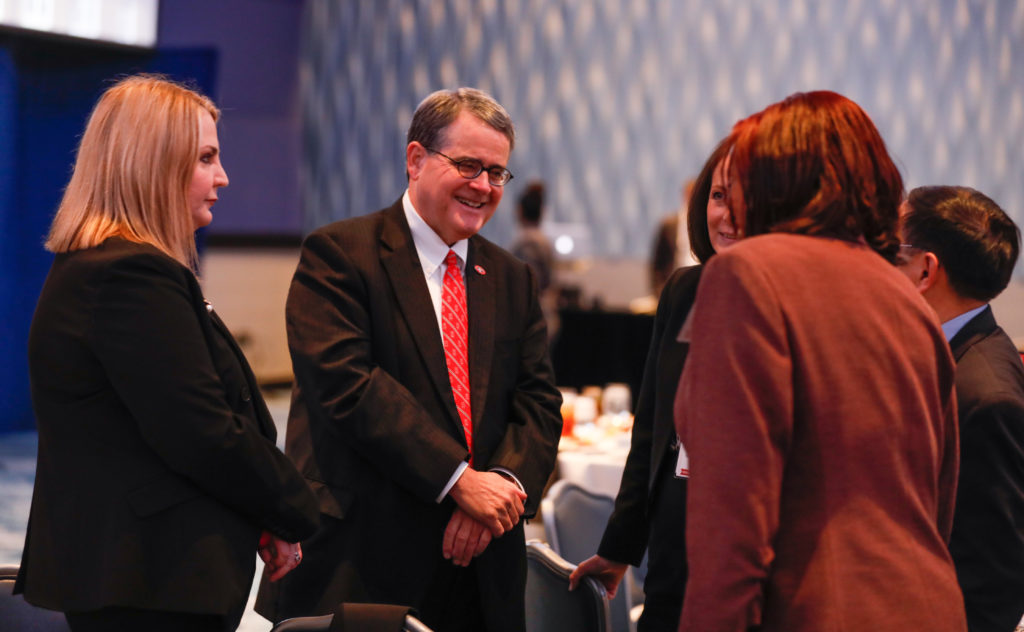 Higher tariffs are not the only harmful effect of the trade war. Heightened uncertainty is crushing to business confidence and reduces spending and hiring. “There are no precedents to the current level of trade policy uncertainty,” Ayers said.

The other concerns topping the Selig Center’s recession risk list are a stock market correction or policy mistake by the Federal Reserve, a leveraged loan meltdown, or geopolitical hot spot that boils over – from Saudi Arabia and Iran to Brexit.

“Our expectation is that oil prices will not increase very much in 2020, but the political situation in several significant oil-producing countries is tenuous,” Ayers said.

“The unemployment rate will rise because the labor force will grow faster than the number of jobs,” Ayers said. “Wages and benefits will not increase very much in 2020 – only by 2%.”

Trade-resistant employment sectors – chiefly education, health care, professional services and hospitality – will account for the vast majority of new jobs created in Georgia. However, the Selig Center predicts jobs will be lost in 2020 in agriculture, retail and manufacturing. Ayers noted the large number of economic development projects the state has landed will partially offset the drop in industrial production and manufacturing as new projects continue to build out, but the pipeline of expansion and relocation projects in contention will decline significantly next year.

Among the state’s largest metro areas, Gainesville (1.2%) and Atlanta (0.9%) will set the pace for job growth in 2020. Athens, Augusta and Brunswick on the Georgia coast will track close to the state’s rate of 0.5% job growth, and Columbus, Macon and Savannah will see little to no job growth. Albany will experience a small decrease in jobs, reflecting the outlook for agriculture and population loss.

“Job gains in Atlanta reflect a strong innovation ecosystem, above-average population growth, and not too much dependence on traded sectors of the economy,” Ayers said. “We expect rural Georgia to be in recession in 2020. The trade war hit agriculture and manufacturing very hard starting in 2018, and until tensions ease substantially many of those jobs will not return to rural areas of the state.”

Following the Dec. 11 Georgia Economic Outlook program in Atlanta, the series will tour the state, visiting eight other cities to deliver local, state and national forecasts. The schedule and ticket information are available at terry.uga.edu/eo.