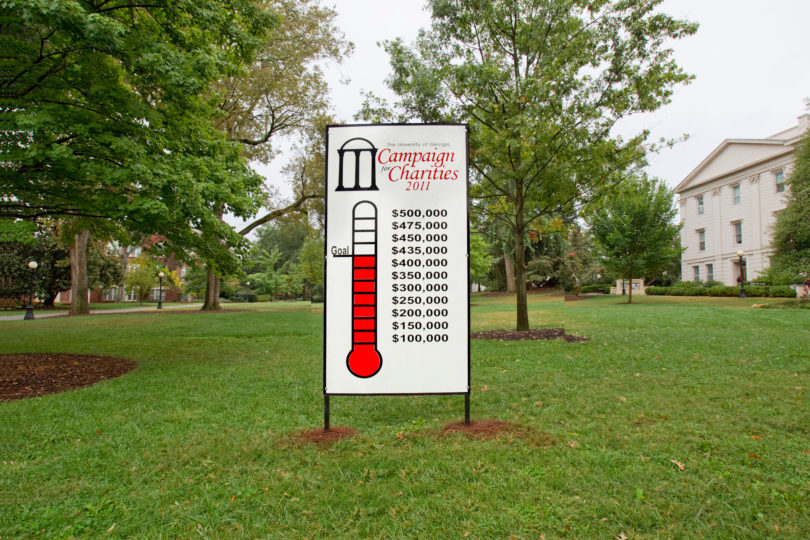 Once a year, UGA conducts a single fundraiser—the Campaign for Charities—for contributions to United Way organizations, statewide independent agencies and independent federations approved through the State Charitable Contributions Program. “This is a special time of year—the time when the ­University of Georgia community comes together to offer a level of service and support for friends and neighbors, colleagues and strangers, who are in need,” said UGA President Michael F. Adams. “These are indeed trying times presenting many challenges for many families, many organizations and many causes.  But UGA—and more importantly—the people at UGA have always stepped up to meet the challenges that face us and that face others. We are called to serve, and we answer that call. That time is now.”

For 11 years in a row, the ­University of Georgia faculty and staff Campaign for Charities has been awarded the Governor’s Cup for the highest contribution per employee for organizations with at least 9,000 employees. Last year, the UGA community contributed ­almost $440,000 from more than 2,200 donors.

As we begin the 2012 Campaign for Charities, for which I am pleased to serve as honorary chair, let us set our sights on matching or besting the previous year’s outstanding record. Our goal is $435,000 and our participation target is 25 percent. Last year, 2,262 participants in the UGA campaign increased their collective giving levels over the previous year, and more than 21 percent of UGA faculty and staff made a contribution.

The 2012 theme is “Sharing Shows Caring—Give from the Heart.” More than just a slogan, these are words by which we may strive to live each day. There are many less fortunate than we who need our help. The State Charitable Contributions Program assists some 1,200 organizations in enhancing the quality of life for the many who receive their vital services.

I know from first-hand experience having family members with special needs. As such, I appreciate the challenges they face as individuals and those who help care for them. From caring for adults with special needs, to operating soup kitchens, food banks and children’s services, the Campaign for Charities addresses a wide spectrum of society’s needs.

We invite each member of the UGA faculty and staff to consider making a gift and to encourage coworkers to do the same.  If each of us would contribute just a small amount per month we could make a tremendous difference; and payroll deduction is an easy and convenient way of doing so.  Each individual plays a critical role in the campaign’s success. There is no doubt that if we all join together, we can reach our goals by the close of this year’s campaign on Dec. 16.

For Catherine Jones, professor of French and Provençal, the charity came naturally—and unexpectedly.

“When I was a graduate student at Wisconsin, one of my fellow graduate students lost her sight during the Ph.D. preliminary process, the comprehensive examinations, and so she was no longer able to read all of the texts,” Jones said. “She learned Braille eventually, but she was no longer able to read the texts at that time. So a group of us got together and read the texts out loud to her.”

As Jones and her classmates began to read aloud, something odd happened: The blind student wasn’t the only one benefitting.

“It was great for everybody because we had to read them, too, and it reinforced our learning,” Jones said.

Now she gets a different sort of benefit for doing essentially the same thing.

After arriving at UGA in 1987, Jones met a colleague who volunteered at Learning Ally, an organization supported by UGA’s Campaign for Charities, that digitally records reading materials for visually impaired people.

Founded in 1948 as Recording for the Blind and Dyslexic, Learning Ally serves more than 300,000 students from kindergarten through graduate school (and lifelong learners) who have visual impairments. According to the organization’s website, Learning Ally helps people who cannot read standard print due to blindness, visual impairment, dyslexia or other learning disabilities.

More than 6,000 volunteers across the U.S. help to record and process the educational materials.

“When I came to Georgia, one of my colleagues was involved in what was then called Recording for the Blind, so it seemed a natural fit,” Jones said.

For 90 minutes a week, Jones lends her voice to the cause, reading books aloud. Although she records primarily in French (mostly textbooks or novels like Les Misérables), Learning Ally records works in English and other languages as well, supplying more than 65,000 digitally recorded titles to the visually impaired.

“I do it mostly to help out people who need it,” Jones said. “There are generally books that anybody can read, but there are some specialized ones like medical or law books that need specialized readers.”

Reaching for the stars

Google “Paige Carmichael” and one of the first links to pop up is a video of her salsa dancing at the Classic Center.

While its not her usual past time, Carmichael’s role in the first “Dancing with the Athens Stars” in 2008 was how the College of Veterinary Medicine’s associate dean for academic affairs initially got involved with the local charity Project Safe.

Project Safe, which is supported by UGA’s Campaign for Charities, works to end domestic violence through prevention and educational programs, crisis intervention and support services. “Dancing with the Athens Stars” is one of the organization’s major fundraisers.

Carmichael, a Josiah Meigs Distinguished Teaching Professor of Pathology, has been on the nonprofit’s board for more than two years. In addition to her normal work of fundraising and advocating for the organization, she also has helped inspire other faculty from the veterinary medicine college to lend a hand to Project Safe.

“What we found is that there are many people who have animals, and because of the animals they’re either reluctant to leave a place where they’re being abused or the animals themselves are being abused,” Carmichael said. “So what Drs. Cornell and Creevy have done is to put together a network of people who will foster these animals while their owners are at the shelter.”

The nature of the work—helping men, women and children in the Athens area who have suffered from domestic abuse to lead healthy and productive lives—has kept Carmichael coming back to the organization. A judge at the 2010 “Dancing with the Athens Stars” fundraiser, she’s even shopped at P.S. Too, one of the organization’s secondhand resale shops, located at 1055 Gaines School Road.

“It’s such a wonderful opportunity to give back to a community that gives so much back to us,” she said. “I just love it.”

Every Monday Stephen Olejnik does what many people come to college to avoid doing: Serve food.

But the professor emeritus of educational psychology and instructional technology isn’t a waiter—he’s a driver for the Meals on Wheels program. His usual route takes him about 90 minutes, during which time he delivers 12 hot and nutritious meals to senior citizens in Athens.

“It makes me feel good. It’s that kind of rewarding activity,” he said. “I have a feeling that everybody should have good meals. Food is important. It fits into my philosophy—­­I don’t think anybody should ever go hungry. So, from that perspective, I feel the reward for being able to contribute that little bit. It’s not really that much, it’s only an hour and half to two hours a week. But it feels like I’m doing something that’s meaningful and helpful to seniors.”

Meals on Wheels is coordinated by the Athens Community Council on Aging, one of the charities supported by UGA’s Campaign for Charities.

The program aims to foster independent living and prevent unnecessary institutionalization of disabled and older adults. All the delivered meals are designed to provide one-third of an adult’s daily nutritional requirements. Menus are developed by a registered dietician and prepared according to the nutritional needs of older adults.

“You deliver to these senior who, for the most part can get around but aren’t able enough to take care of all of their meals,” Olejnik said. “They’re always very happy to see you.”

More than 130 volunteers across Clarke County deliver about 180 meals a day during the week, with 100 extra frozen meals a day to supplement evening and weekend meals for clients in need.

A place to (finally) call home

“Being a homeowner gives me a sense of independence, ownership and a great sense of pride. And it’s just nice to have some place to call home.”

That’s how Jackie Roberts sums up her feelings about owning her own home for the first time. Roberts, an administrative manager in the Office of the Vice President for Public Service and Outreach, became a homeowner in 2010 with help from Athens Land Trust, one of the agencies supported by gifts from the Campaign for Charities.

Roberts, who began working at UGA in 1996, said she’d always thought about owning a home.

“It was always in the back of my mind,” she said. “I’ve read studies showing that children who grow up in their own homes perform better in school.
I knew it would benefit my children and me to have that stability.”

But as a single mother with three children, it wasn’t until she saw a flier from the nonprofit Athens Land Trust that she discovered home ownership was within her reach.

Athens Land Trust creates permanently affordable, energy-efficient housing for people with low to moderate incomes. Since its founding in 1994, ALT has built or renovated nearly 30 single-family homes, with another 20 in the works, and developed the Fourth Street Village affordable rental community. ALT’s other programs include land conservation and the establishment of a local community garden network.

Roberts first contacted ALT several years ago and talked with housing director Heather Benham, who is also a UGA almuna.

“I met with Heather, and she showed me some new houses they had built at that time, but I wasn’t quite ready yet,” she said. “But I went ahead and took the homebuyer education classes and did the credit checks.”

Then, about two years ago, she received a phone call from Benham, who said, “We have a three-bedroom house under construction—are you still interested?”
Roberts said the timing was perfect.

“We were in the process of moving from one apartment to another,” she said. “The price to rent a three-bedroom apartment was becoming unaffordable. When I looked at the numbers,

I found that my mortgage payment on a brand new house was going to be even less than the rent on the apartment we were currently living in. It turned out to be much more economical to buy.”
Roberts discovered another financial benefit after she and her children moved in. Because ALT builds to EarthCraft standards of energy efficiency, her utility bills are now much lower than they were when she was renting. Even more important to Roberts is how much her children appreciate having their own home.

“This summer we went to the beach, on our first vacation in years. We loved it—but just the thought of coming home—it was a different feeling than we’d ever had before,” she said. “It’s now something my children aspire to, getting a college education, working hard and having a home of their own one day.”

Roberts said she would recommend the ALT program to families who may think they could never afford to own a home.

“Working with the people at ALT was a great experience,” she said. “They were there every step of the way, from day one through the closing, and still today if I have any issues I can give them a call. I feel very blessed and grateful for everything they’ve done.”