Eugene Odum is lionized throughout science as the father of modern ecology and recognized by the University of Georgia as the founder of what became the Eugene P. Odum School of Ecology — the world's first stand-alone college of ecology, which celebrates its 10th anniversary this year.

Editor’s Note: This is the second story in a new series, called Georgia Groundbreakers, that celebrates innovative and visionary faculty, students, alumni and leaders throughout the history of the University of Georgia — and their profound, enduring impact on our state, our nation and the world.

Eugene Odum was not given to fits of anger, but this time he was furious.

It was the fall of 1946. Odum, then a young associate professor in the University of Georgia’s biology department, had taught a course on ecology for several semesters and was passionate about the subject.

In a meeting with his colleagues, Odum suggested that his ecology class be required of all new biology majors. His fellow scientists looked at him and laughed. Odum stormed out of the room but was not deterred. That night, he began writing a guiding set of principles that would ultimately serve as the foundation for the discipline’s first textbook.

Today, no one laughs about Odum’s work.

He is lionized throughout s­cience as the father of modern ecology and recognized by the University of Georgia as the founder of what became the ­Eugene P. Odum School of Ecology — the world’s first stand-alone college of ecology, which celebrates its 10th anniversary this year.

Before lead was banned from gasoline, before Rachel Carson published Silent Spring about the dangers of pesticides and before the U.S. created Earth Day, Odum’s research and advocacy inspired the modern ­environmental movement.

“He was a true visionary; he saw things that others didn’t,” said Betty Jean Craige, University of Georgia Professor Emerita of comparative literature and the author of “Eugene Odum: Ecosystem Ecologist and Environmentalist.” “He spoke intensely and passionately about saving the environment, but he used his model as a way of thinking about the world.”

“Fundamentals of Ecology,” which Odum published in 1953 with his younger brother and fellow ecologist Howard, was the discipline’s only textbook for more than a decade. This book was the first to suggest that scientists approach nature “top-down.” 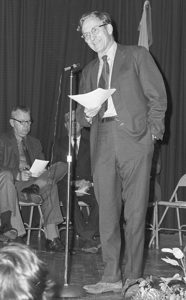 Eugene Odum traveled far and wide to lecture about the science of ecology.

Eugene Odum pioneered the concept of the ecosystem — the holistic understanding of the environment as a system of interlocking biotic communities. These ideas were inspired in part by Odum’s father, Howard W. Odum, a renowned sociologist at the University of North Carolina, who taught his sons to never lose sight of the big picture, and who urged Eugene to write his textbook.

“What if I don’t know enough yet?” Odum recalled asking his father, in an interview with Craige. “You’ll learn as you write,” his father responded. “What if I make mistakes?” he asked. “You’ll correct them in the second edition.”

But there were not many corrections to make. In his landmark book, Odum argued that we cannot hope to understand the environment without first appreciating the complex biological economy of shared resources, competition and cooperation. The ecosystem, he was fond of saying, is greater than the sum of its parts.

“We would not first bring the student the liver of the frog, have him study that, then the next day bring him the isolated stomach or each individual muscle one by one — and finally during the last week of the course attempt to assemble all the parts into a frog,” he wrote. “Our poor frog would be most incomplete and probably bear little resemblance to the real frog when we tried to assemble the parts we did study! Yet amazing as it may seem, many attempt to teach ecology using this backwards ‘parts-before-the-whole procedure.’ ” 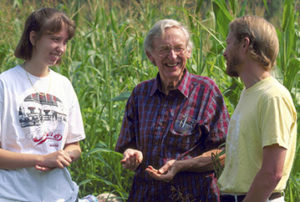 Throughout his career, Odum imparted his wisdom to thousands of students, both in the classroom and the field.

But Odum’s ideas were not simply theoretical concepts; he leaped at every opportunity to put his ideas into practice.

With a small team of graduate students and a modest grant of $10,000 from the Atomic Energy Commission, Odum began work at what would later become UGA’s Savannah River Ecology Laboratory. Now spanning more than 300 square miles, this facility still serves as a unique outdoor lab where researchers study energy technologies and the effects of human activities on the natural environment.

He was also instrumental in developing the University of Georgia Marine Institute, where he began a long-term analysis of salt marsh ecology and coastal food webs that inspired generations of wetland scientists. Today, the Marine Institute provides researchers with ready access to coastal habitats and long-term data on the state’s estuaries and barrier islands.

While Odum was a careful and thoughtful researcher, his work often blurred the lines between science and advocacy. Ecology, he would tell people, simply comes from the Greek word “oikos,” meaning house. The various ecosystems, or houses, could be as small as a lonely woodland pond or as large as an entire planet, and humans had a responsibility to treat our “big house” with utmost care. 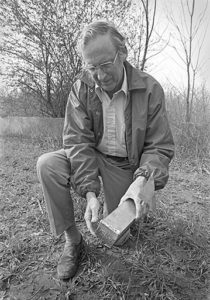 “Eugene Odum has had an important influence on the world by his insistence on the value of a quality environment. His pioneering work in ecology has changed the way we look at the natural world and our place in it.” — President Jimmy Carter on presenting him with the Tyler Ecology Award in 1977 at the White House.

“We must begin to devote more of our human wealth, energy and engineering skills to servicing and repairing our ‘big house,’ the biosphere, which provides not only a place to live and enjoy but also all of our life-support needs,” Odum wrote in his book “Ecological Vignettes: Ecological Approaches to Dealing with Human Predicaments.”

Odum would spend decades refining and spreading his holistic model of ecosystem ecology, which found a captive audience in the burgeoning environmentalist movement. In many ways, Odum had become the face of the movement, and his excitement was infectious.

“He would wave his hands around while he talked like a maestro in front of an orchestra,” said David Coleman, UGA Distinguished Research Professor Emeritus of Ecology, who worked closely with Odum at the SREL. “He was a master at getting people to think about things in different ways.”

Odum’s name began to appear in popular media like Time and Newsweek, where reporters asked him questions about the fate of humanity and the importance of environmental stewardship. In all his public commentary, Odum never strayed far from his concept of holism.

People in the university system were taking note of his accomplishments as well. Twenty years after his colleagues laughed him out of a departmental meeting for suggesting that his class become part of the required biology curriculum, the board of regents granted approval for UGA’s Institute of Ecology in 1967, with Odum serving as its first director.

In 1970, he became the first UGA faculty member to be elected to membership in the National Academy of Sciences. And he was awarded the Tyler Ecology Award by former President Jimmy Carter in ceremonies held at the White House.

“Eugene Odum has had an important influence on the world by his insistence on the value of a quality environment,” said Carter. “His pioneering work in ecology has changed the way we look at the natural world and our place in it.”

Odum produced a seemingly endless stream of books, international conference talks and journal articles, but he always held a special place in his heart for his textbook. Now in its fifth edition, “Fundamentals of Ecology” has been translated into more than a  dozen languages.

Odum passed away at his Athens, Georgia, home in 2002 at the age of 88. In 2007, the Institute of Ecology was renamed in his honor as the Eugene P. Odum School of Ecology.

And it is here, in the world’s first school devoted solely to the study of ecology, where scientists continue Odum’s mission to safeguard both the Earth and its inhabitants. 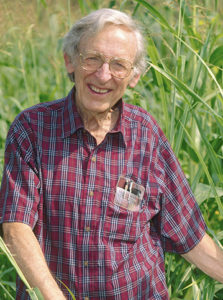 Eugene Odum passed away at his Athens home in 2002 at the age of 88. His legacy, though, will live forever.

Or like Nina Wurzburger, who conducts research in ecosystems ranging from tropical rainforests to the arctic tundra, where she studies how plants, with the help of their symbiotic microbial partners, allow the ecosystem to rebound from destruction wrought by human activities and natural disasters.

Or James Byers, who studies the impact of invasive species on native animal and plant life in our oceans. These non-native species are a leading cause of endangerment and extinction of native life, and Byers is developing new tools to predict how and when invasive species will invade and what impacts they will have on the ecosystem.

These projects are but a sample of the work conducted by Odum School faculty. While each scientist brings his or her own unique passion and expertise to bear on important ecological problems, you do not have to go far to find Eugene Odum’s influence.

In a tribute to her late friend, Craige noted that he gave much of his accumulated wealth, derived largely from book royalties and awards, to UGA’s ecology program.

“But he gave something even more valuable to the people who knew him,” she wrote. “He taught us a way to understand the world as a giant ecosystem whose parts are all interconnected, and he instilled in us an environmentalist conscience.”