If you want to appreciate the value of the U.S. space program, look no further than your cellphone.

Worldwide telecommunications, digital images – even the accuracy of your map and weather apps – can be traced back to the early days of this nation’s successful effort to land on the moon.

These are among dozens of products that are part of our everyday lives – from water filters and cordless power tools to memory-foam mattresses and the cushions on the bottoms of athletic shoes – that were invented or perfected by scientists at NASA and their partners in the private sector.

As the world prepares to celebrate the 50th anniversary of the first moon landing on July 20, 2019, UGA Today talked with Ben Davis, a professor of mechanical engineering at UGA, about the wide-ranging benefits of this technological triumph. Before coming to UGA, Davis was a propulsion vibrations analyst at NASA. 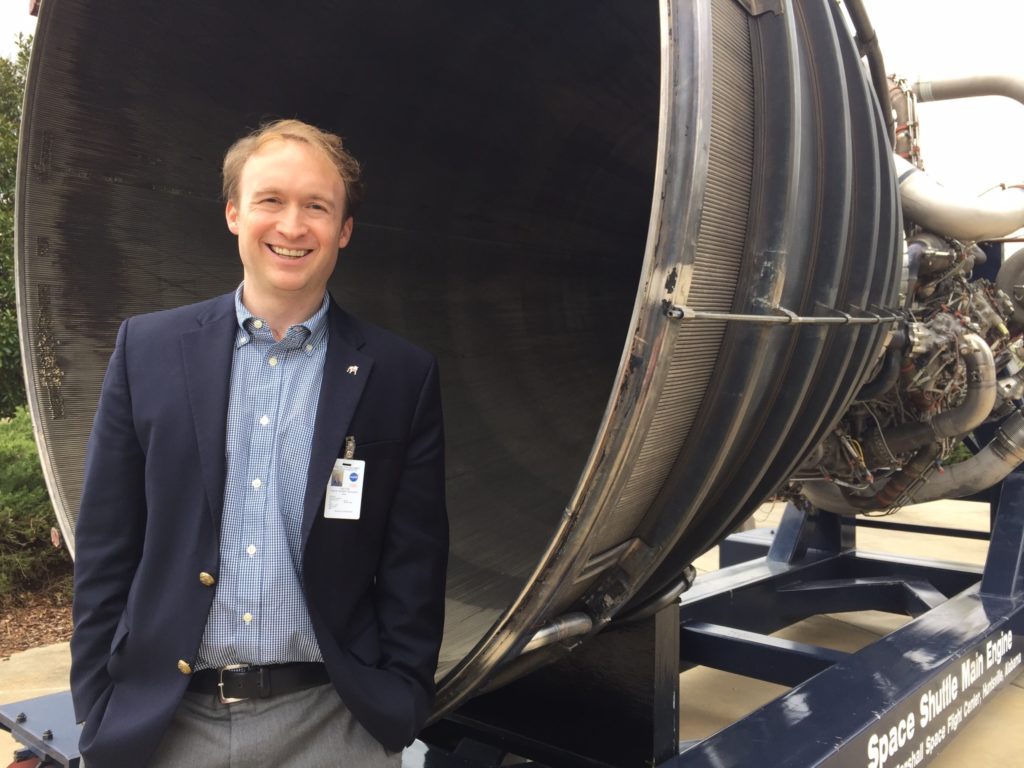 Professor Ben Davis stands in front of a Space Shuttle Main Engine. His work includes a project to help NASA determine if a key rocket component can withstand the rigors of the next generation of space flight.

What are the most important legacies of the space program?

To me, the most important legacy of the space program is the way it has inspired generations of scientists and engineers from all over the globe. Many of my mentors were first inspired to become engineers after watching the Apollo 11 moon landing.

Some of my earliest memories involve watching the space shuttle launch and dreaming of one day working for NASA. After living out that dream for several years, I now teach engineering students. Many of my students were first inspired to become engineers by witnessing NASA’s more recent achievements such as the stunning success of the Mars Exploration Rover mission.

If you ever get the chance to visit a NASA facility, the inspirational nature of NASA’s work will be on full display.  Back when I worked for NASA, I remember touring the visitor’s center at the Kennedy Space Center in Florida and being taken aback by the size of the crowds. I saw people of all ages and from all walks of life (many of whom were taking a precious day out of their Disney vacation) in complete awe of our nation’s space program.

NASA is probably the only government agency that can generate this type of excitement.  It’s hard to imagine people wanting to skip a day in the Magic Kingdom to tour, say, the IRS or the Department of Commerce!

In 1962, President John F. Kennedy predicted the following benefits from space exploration: “The growth of our science and education will be enriched by new knowledge of our universe and environment, by new techniques of learning and mapping and observation, by new tools and computers for industry, medicine, the home as well as the school.” How did this prediction become a reality?

It’s cliché, but true that “necessity is the mother of invention.” When we endeavor to send humans to the harsh environment of space, suddenly the simple necessities we take for granted on Earth, such as air to breathe and water to drink, become formidable technical challenges to be solved. Solving these challenges inevitably leads to breakthroughs and innovations that would never have happened if we had not first made the decision to explore space.

Some examples of technologies that trace their origins back to U.S. space exploration include LED lights, infrared ear thermometers, aircraft anti-icing systems and cordless vacuums. But this is just the beginning of a long list of NASA innovations. Particularly in science and engineering, the agency has developed an array of technologies, research discoveries and computer software. The vast majority of these developments are openly available for use in research and industry.

One example with which I am familiar is the structural-analysis software NASTRAN. It was first developed at NASA in the 1970s to perform structural analysis of the space shuttle and is now in use by virtually every major automotive and aerospace manufacturer. So what started as a specialized tool for use in the space program is now used every day to make the cars we drive and the airplanes we fly safer and more reliable.

In the early days of the space program, the primary debate was about the cost of beating the Soviet Union to the moon. Today’s debate centers on the cost of sending human beings back to the moon and colonizing Mars. Why is this still worth the investment?

NASA occupies a unique position among government agencies in that it has a relatively small budget compared to the public attention it receives. People are often surprised to find out that for every tax dollar spent in the U.S., only about half a penny goes to fund NASA. Studies have found that every dollar spent on NASA returns more than seven dollars-worth of economic impact.  On this basis alone, it seems like any investment in NASA is money well spent; yet, I also think investment in NASA pays additional returns that are hard to quantify.

Going to the moon remains one of humankind’s crowning achievements and has helped shape how we think of ourselves as Americans.  In a time when our country seems so divided, I think an ambitious space exploration program could be a unifying force. While we certainly have a lot of competing priorities for how we spend our limited tax dollars, I believe the investment we make in NASA has the power to positively shape the spirit and trajectory of our nation in ways that few other investments can.