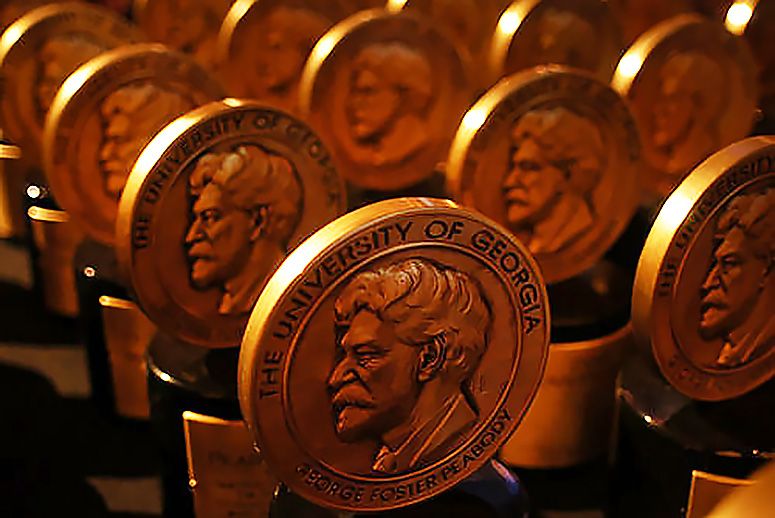 The Peabody Awards are based in the Grady College of Journalism and Mass Communication at UGA.

They represent the best from over 1,200 entries in TV and streaming media

The Peabody Awards Board of Jurors has unveiled all 30 programs representing the most compelling and empowering stories released in broadcasting and streaming media during 2021.

The Peabody Awards are based at the Grady College of Journalism and Mass Communication at the University of Georgia.

“Whether exposing injustice, detailing uncomfortable truths or making us laugh uncontrollably, all of the winners demonstrated how to tell a compelling story,” said Jeffrey Jones, executive director of Peabody. “With an ongoing pandemic, political obstructionism and senseless wars continuing to take and disrupt lives, these programs pushed past many obstacles to tell important stories that will stand the test of time. Peabody is proud to honor their incredible work.”

Chosen unanimously by a board of 19 jurors, the Peabody 30 are the best from over 1,200 entries submitted from television, streaming media and podcasts/radio. Entertainment winners like FX’s “Reservation Dogs,” Peacock’s “We Are Lady Parts,” and HBO Max’s “Sort Of” gave audiences hilarious, artistically evocative and complex experiences of communities historically underrepresented and stereotyped in television.

The nine news winners this year covered numerous pressing issues, including reporting of the Jan. 6 insurrection, Afghanistan’s past and future, abortion access, and trans rights. PBS’ “January 6th Reporting” and The New York Times’ “Day of Rage: How Trump Supporters Took the U.S. Capitol” documented a turning point in American democracy, while local news outlets were named winners for their investigations into deadly use of the prone position in arrests (KUSA), the lack of public resources for single parents facing housing insecurity (NBC Bay Area), and the erosion of civil liberties for protesters (ABC15 Arizona).

The 30 winners of the 82nd Annual Peabody Awards were named during a multiday virtual celebration from June 6-9. Video announcements and acceptances are available at: https://peabodyawards.com/2022-acceptance-videos/.

Peabody previously announced “Fresh Air with Terry Gross” as the year’s Institutional Award winner. This distinctive honor recognizes institutions and organizations, as well as series and programs, for their enduring body of work and their iconic impact on both the media landscape and the public imagination. Dan Rather was also named winner of the Peabody Career Achievement Award. Dozhd, also known as TV Rain, the independent Russian television channel blocked by state authorities for its coverage of Russia’s invasion of Ukraine, won the Peabody Award for Journalistic Integrity. Peabody also made a special commendation in recognition of journalists killed globally in the last year.

Arts
“Summer of Soul: (…Or When The Revolution Could Not Be Televised)” (Hulu) Presented by Alicia Keys