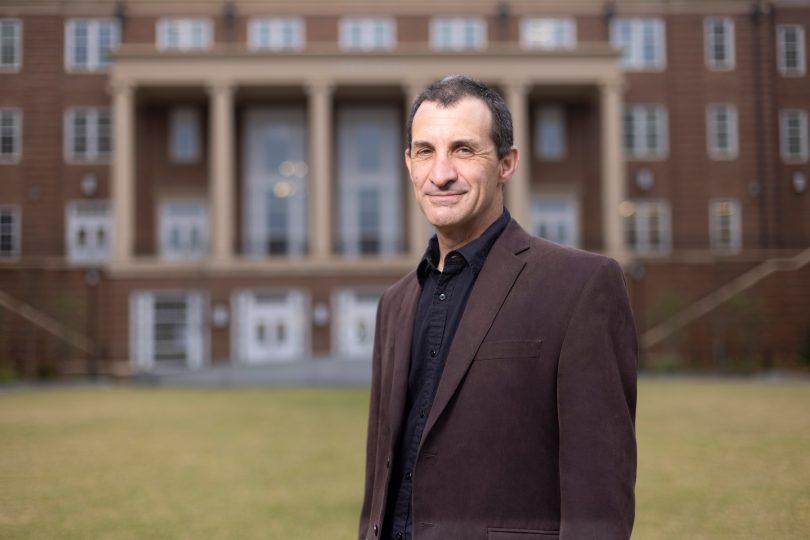 David Barbe AB '86, director of the Music Business Program in the Terry College of Business for the last 11 years, brings a plethora of experience to the job. Barbe is a songwriter, touring musician, record label owner, music publisher and much more. (Photo by Peter Frey/UGA)

A pandemic might have rocked the music industry, but it didn’t stop UGA’s music business certificate program from forging ahead in unique ways

Beyond the hedges and classroom buildings in Athens sits a downtown bursting with bars, clubs, and music entertainment venues, where bands like R.E.M., Drive-by Truckers, and Widespread Panic got their start. There are publicists, merchandise companies, radio promoters, booking agents, artist managers—an entire city of musical opportunities.

“For many years, Athens has had this amazing music scene, but for the first 30 years of it, there was no music business program at UGA,” says David Barbe AB ’86, who’s been the program director for 11 years. “The music business certificate filled the void.”

The program began in 2006 and was built on the small but robust music scene in Athens and a desire from the original co-director, Bruce Burch BSEd ’75, to create something at UGA that seized these local opportunities for students interested in the industry, giving them a place to learn and grow. The program began with just 22 students and now has some 200 per year.

Putting in the Work

The certificate provides the education and experience needed to give students a leg up in the industry.

The 21-credit-hour program encompasses a handful of core classes, such as the fundamentals of and emerging issues in the music business industry, paired with whatever electives the students choose to take. The interdisciplinary, “a la carte” feel of the certificate program allows students to customize their experience to fit their future goals.

“It’s pretty rare for me to find two students whose path through this is identical, even two kids who seemingly want to do the same thing,” Barbe says.

Being in it helps me know it better. The music business changes, not just generationally or annually, but day by day. I think it helps students to see that we’re teaching you what we live—I’m in it because I believe in it.” — David Barbe, director of the Music Business Certificate Program

Students must complete an internship during their academic year in the capstone class, which the program facilitates through Barbe’s extensive list of industry contacts. Of course, students can opt for an additional summer internship elsewhere, but the hands-on experience they get from an Athens-based record label or venue is quite different than what they might find in one of music’s major cities.

“Because of the size of the industry in Athens, it’s a place where it’s not an overwhelming experience to just dive right in and get your feet wet,” says certificate alumna Stephanie Self BMus ’07, BBA ’07, who is a partner of a business management firm in Nashville. Self was also part of the program’s first class.

“In Athens, I could work in a venue. I could work at a printing company. I could work at a nonprofit rehearsal space or recording studio. Having a smaller music community provided a deeper, more well-rounded experience because in a small company, you do all of it. You have access,” says Self. “The people running these businesses were an extension of our professors, so they were willing to teach us what they were doing.”

Like it has with everything else, the pandemic created headaches for students within the certificate program.

Without live music, every angle of the industry has been affected.

“Many musicians have been unemployed for almost a year now due to lack of gigs,” says program coordinator Lane Marie O’Kelley AB ’17. She is also a graduate of the certificate program and an Athens-based musician. Before COVID, O’Kelley was performing on a weekly basis. Like many other musicians, she had to cancel all of her spring and summer gigs last year and is still waiting to connect with a live audience again.

Still, the program was able to pivot and help students find opportunities.

Although the internship list was much shorter this past year, the program linked students with virtual alternatives. Students completed telework internships in social media marketing, blog writing, and data tracking, such as organizing digital album catalogs or analyzing songwriting royalties.

Despite the challenges, the program is still a community of passionate, like-minded students. “The instructors, courses, and internship offerings weren’t specific to one genre,” says Cecile Duncan ABJ ’15, a certificate graduate who works as a radio and digital promotions manager for Merge Records in Durham, North Carolina. “Looking back, that mix feels very special to me–that kids into EDM or country or hip hop or indie rock were all in group projects together, learning the same essentials, all getting value from the same program.”

Students learn from current industry professionals. In fact, it’s a requirement for faculty to be currently involved in the industry. Andrew Rieger AB ’94, a lecturer in the program, owns an indie record label (Orange Twin Records) and is part of a touring band, Elf Power. Tom Lewis, the program’s associate director, is an engineer and producer with 35 years of experience. David Lowery EdD ’18, a senior lecturer, is an artist, producer, and songwriter with a platinum-record career; he’s also an active voice in the artists’ rights movement and on issues of intellectual property. 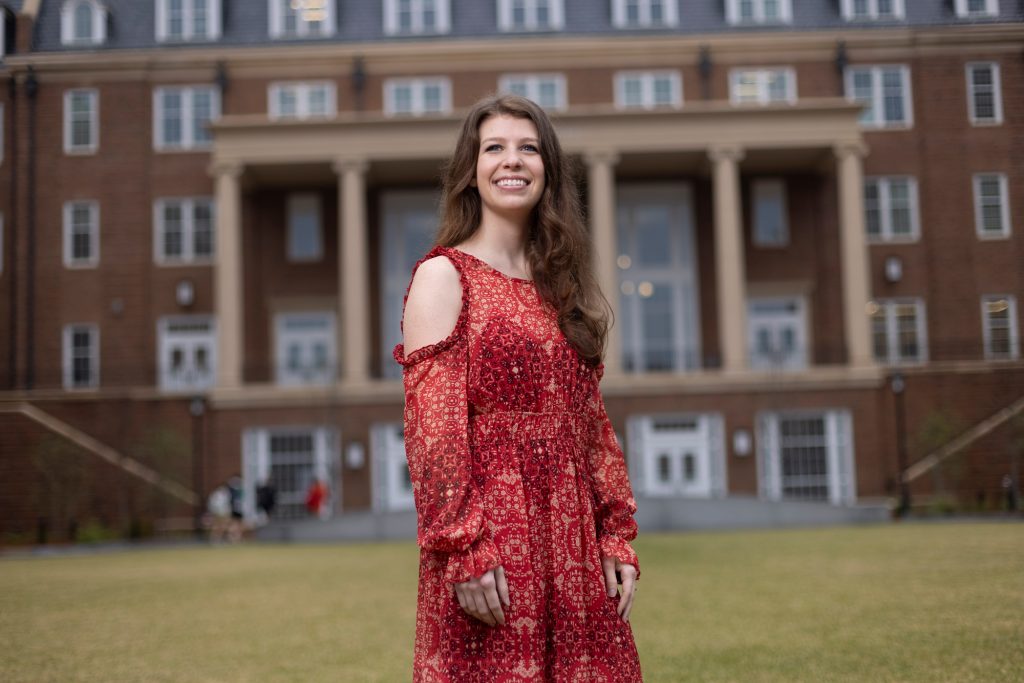 Lane Marie O’Kelley AB ’17 is the program coordinator of the Music Business Certificate Program. She is also a graduate and an Athens-based musician who has missed a year’s-worth of live gigs because of the COVID-19 pandemic. (Photo by Peter Frey/UGA)

Hope for the Present and Future

And Barbe? Well, he’s done just about everything you can think of and then some. He owns a recording studio and a music publishing company. He’s a producer. He’s an engineer. He’s a songwriter and was a touring musician. He’s booked shows and acted as a concert promoter. “Being in it helps me know it better. The music business changes, not just generationally or annually, but day by day,” says Barbe. “I think it helps students to see that we’re teaching you what we live—I’m in it because I believe in it.”

Barbe also has a gift for remembering names…like all the names of all the students who have graduated from the certificate program since he took over in 2010. These alumni are now a mix of industry professionals whose class photos line Barbe’s office hallway. Current students get the opportunity to engage with these professionals via guest speaking events, which have continued virtually during the pandemic. Students can also talk one-on-one with alumni who span the spectrum of music business careers and connect for potential internships.

“The reason that the program is so successful is that it all comes back to David Barbe. The program certainly would not be what it is and would not be held in such high regard across our entire industry if it weren’t for his connections,” says Robert Knotts BBA ’13, a graduate of the certificate program and vice president of distribution at Thirty Tigers in Nashville. “The level of knowledge that David’s able to impart is so much more applicable than I think students realize.”

Barbe, his hallway of composites, and the music business certificate program aren’t going anywhere; they’ll continue to rally, virtual setting or not. After attending his first concert in the Classic City, Barbe found his community and isn’t leaving. “I think that’s what a lot of people find in the music business program,” he says. “They realize they’ve found their community.”