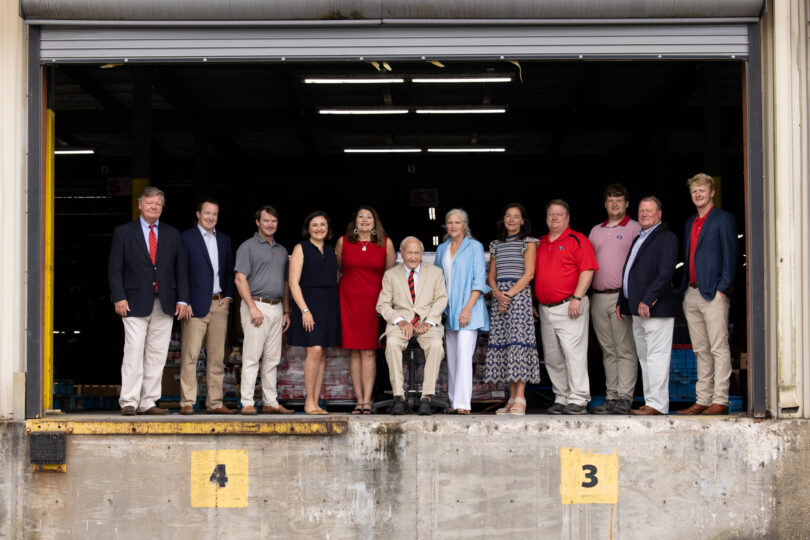 The candy starts off as molten golden sugar.

The liquid gold flows onto a metal table to cool. Then, the 100-pound ball of pure sugar rolls to the taffy puller where it’s blasted with cold air that turns it a bright, glossy white. The workers add the flavoring—today it’s triple distilled 100% pure peppermint oil—and a bright red stripe. After that, it’s onto the batch roller where the log of candy is rolled down to size and chopped into bite-sized pieces that look like satin buttons, glistening under the fluorescent lights. 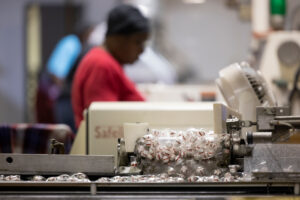 They’ll ultimately make their way into a graining room after packaging, where the candy will develop the matte texture that’s kept Stewart Candy Company customers loyal for many years.

Known originally for their peppermints and other soft candies, the family-run Stewart Candy Company has deep Georgia roots in Waycross, with three generations of Stewarts proudly calling the University of Georgia their alma mater. They will be celebrating 100 years as a family business in 2022.

That love affair with red and black started early. James E. Stewart Jr. BBA ’52, known to all as Papa Stewart, made sure of it.

“Learning to sing ‘Jesus Loves Me,’ as a child was immediately followed by ‘Glory, Glory to Old Georgia,’” says Deen Stewart BS ’88. Deen and his twin brother Sam BS ’88 are the youngest Stewart children and both managing partners in the company. Carrying on that tradition is one of Sam Stewart Jr.’s BS ’17 most cherished memories.

The Stewart family will boast a total of 16 UGA graduates once Joe Cook Stewart earns his bachelor’s degree in 2022. All six of Papa Stewart’s children graduated from the university, along with six of his grandchildren (not to mention several in-laws).

The Value of a UGA Education

“There was never any question that the Stewart children were going to college, and UGA topped the family’s list. Education has always been extremely important to Daddy,” says Amy Stewart Fletcher BSEd ’85, MEd ’89, the third Stewart child and a managing partner of the company. 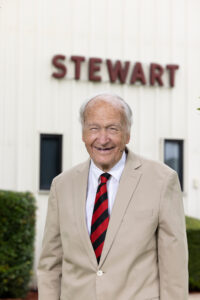 James E. Stewart Jr. BBA ’52 is the family’s patriarch. Stewart Candy Company was founded by his father, and it has grown from three employees to 245. (Photo by Andrew Davis Tucker/UGA)

When Mary Stewart Bishop BBA ’17, a human resources specialist for Stewart Distribution and one of Papa Stewart’s grandchildren, was studying at UGA, she remembers Papa Stewart asking to borrow her textbooks.

“One day I came in, and he was reading a book on calculus,” Bishop says. “I was like, ‘Papa, this is not light reading.’”

That drive to keep learning helped Papa Stewart stay ahead of the curve. He was an early adopter of just about every technology,particularly those that helped the business—even if that meant taking up a conference room-sized space with an early generation computer.

The company itself was a family affair from the start.

“When we were little, he’d give us a crayon, and we did inventory down at the Albany Avenue store (the original storefront for Stewart Candy Company),” says Ivy Stewart Monroe BSEd ’81, the second eldest of the Stewart six. Sara Stewart Cotton ABJ ’87, the fourth Stewart child, created the artwork used for the Stewart business logo today.

For Papa Stewart, leadership has always come down to action. Guided by his strong religious faith and selflessness, his focus has always been to do what’s right—by the family, by the business’s employees, by the customers, and by the community, says Cotton. And he’s passed that expectation down to his children and now grandchildren who work at the company, says James E. Stewart III BBA ’80, a managing partner and the oldest child.

As the business has grown from three—Granddaddy Stewart (Papa Stewart’s father) and two employees—to its current staff of 245 employees, Papa Stewart’s adage has served the company well. In addition to making candies ranging from traditional like butter mints and honey, the company has added quirkier flavors like key lime pie and huckleberry.

Stewart Candy also expanded into a large distribution supplier in the late 1970s. Stewart Distribution serves customers throughout Georgia, Florida, Alabama, and South Carolina with everything you can think of, from candy to Herschel Walker wings. Grandson Jake Stewart AB ’09 is the company’s director of purchasing for the 179,000 square foot warehouse. 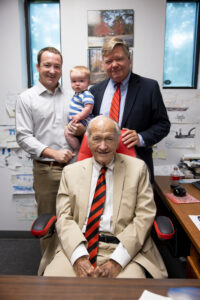 The family won’t be stopping any time soon. With five of Papa Stewart’s grandchildren now involved in the business and the fifth generation well on its way with seven great-grandchildren, Papa Stewart can feel confident that the Stewart Candy Company and Stewart Distribution will be in capable hands to carry on his and his father’s legacy.