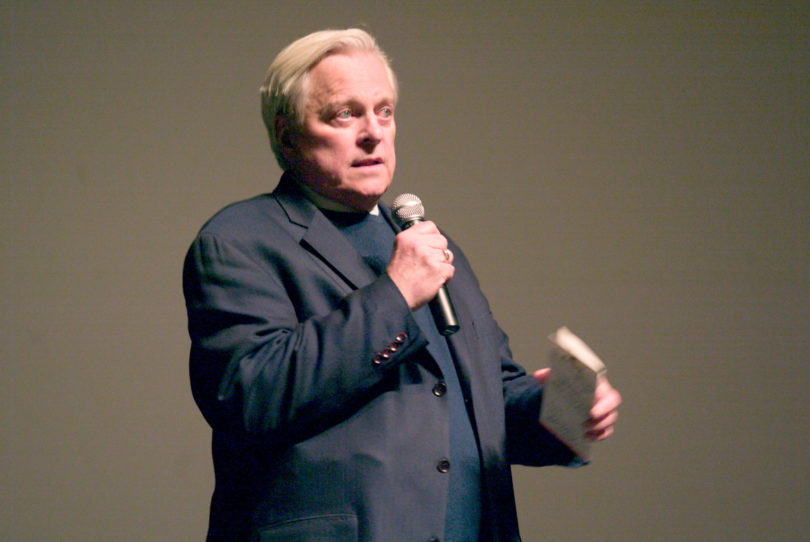 Robert Osborne (above) has selected eight films for his second annual Robert Osborne’s Classic Film Festival, scheduled for March 23-26 at the Classic Center.

Passes for the festival and tickets for individual films are now available at the Classic Center box office, online at www.classiccenter.com or by calling
(800) 918-6393. A pass to all films and panel discussions is $60 ( $45 for students with valid identification).

The selected films “represent the breadth and variety of Hollywood, independent, and international classic cinema from the 1930s to the 2000s,” according to Osborne, host of Turner Classic Movies and columnist for the Hollywood Reporter.

The movies in Athens’s second celebratory festival are:  Alfred Hitchcock’s North by Northwest, Tim Burton’s Ed Wood, Carol Reed’s The Third Man, Blake Edward’s Breakfast at Tiffany’s, Steven Spielberg’s Raiders of the Lost Ark, Elia Kazan’s On the Waterfront, Christopher Guest’s Best in Show and, as the special Sunday matinee on March 26, the restored archival print of Gone With the Wind.

Nate Kohn, festival director and associate professor of telecommunications in UGA’s Grady College of Journalism and Mass Communication, is thrilled by the list.

“Robert is the world’s foremost authority on the Academy Awards, and he worked hard to put together this dynamic program,” Kohn says. “Robert’s commitment to the success of our festival is something we’re very proud of.”

“It’s an exciting adventure to see these films the way they were meant to be seen,” says Osborne, who also plans to include original trailers and cartoons so attendees can have the complete movie experience. “The big screen gives a different dimension and vitality to them.”

All films, with the exception of the March 25 matinee, Raiders of the Lost Ark, require a ticket for admission. The matinee is open to the public.