The 2022-2023 UGA Presents season opens Sept. 8 at the Hugh Hodgson Concert Hall with The War and Treaty, a wife-and-husband duo Rolling Stone has called “one of Nashville’s hottest acts.” Their Hearts on Fire tour also includes stops at the Grand Old Opry, Dollywood and such major cities as Baltimore, Denver, San Francisco and Washington, D.C. 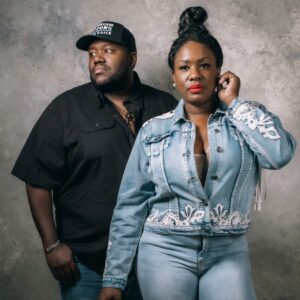 Michael Trotter Jr. and Tanya Trotter have been performing together for eight years. (Submitted photo)

Michael Trotter Jr. and Tanya Trotter have been performing together for eight years. In 2018, when they released their first album, “Healing Tide,” Rolling Stone called the lead single a “joyfully relentless title track, reminiscent of classic Ike and Tina Turner rock-infused soul.” Since then, The War and Treaty has amassed a following as eclectic as their sound itself with “voices that will stop you in your tracks” (Garden and Gun) and their bluesy but joyful fusion of Southern soul, gospel, country and rock ‘n’ roll.

The band continues “their commando, no-limits journey to the top of the music world” (Associated Press) following their latest widely acclaimed release, “Hearts Town.” Known for a live show nearly revival-like in its intensity, they “build up waves of emotion that crash into a cathartic release of a tour-de-force performance” (Austin-American Statesman). The versatile duo has opened for artists such as Al Green, Brandi Carlile, Jason Isbell, John Legend and Lauren Daigle. Their multifaceted collaborative efforts include work with Dierks Bentley, Elvis Costello, Emmylou Harris, Leslie Jordan, Mumford & Sons, the Nitty Gritty Dirt Band and Sturgill Simpson.

The War and Treaty concert is just the start of a slate of roots music at the Hodgson Concert Hall. On Jan. 18, Leyla MaCalla, formerly of the Carolina Chocolate Drops, appears with selections from “Breaking the Thermometer to Hide the Fever,” a multidisciplinary work that follows her personal journey as she uncovered the history of Radio Haiti, Haiti’s first privately owned Creole-speaking radio station.

Scottish neo-folk band Breabach comes to Athens on Feb. 24 with music The Scotsman said was “as polished as it was passionate, matching fiery intensity with exquisite finesse.” And the UGA Presents season concludes May 13 with the Yonder Mountain String Band. “More than most of their jam band-scene counterparts,” the Dallas Observer wrote, “Yonder Mountain String Band grows more polished, more dynamic, more adventurous and more commanding every year.”

UGA Presents season subscriptions are still on sale and offer the deepest discounts available to all patrons. Choose from the all-encompassing Everything Ticket (25% off single ticket prices), one of the curated series (20% off), or create a series of five or more performances (10% off).