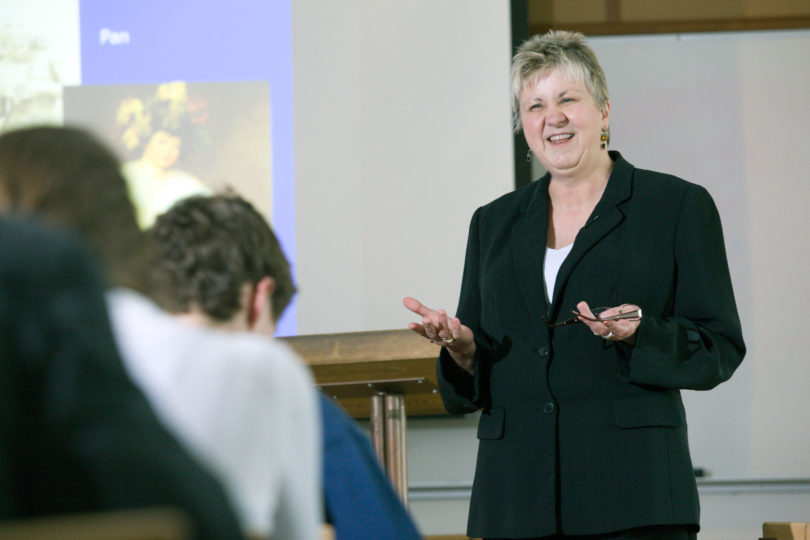 Christy Desmet is a professor in the English department and director of First-Year Composition.

Many first-year students arriving at UGA might say the reason to write is simple: to graduate. A diploma from the university requires that every student must complete either two English composition courses or pass proficiency tests. Administered by UGA’s English department, the First-Year Composition Program teaches thousands of UGA students each year why writing is important beyond acquiring that prized piece of faux parchment.

Led by Christy Desmet, FYC director and associate professor of English, and Deborah Church Miller, associate director, the program in the past six years has guided nearly 40,000 students through almost 2,000 sections of the composition courses required for graduation from UGA. During the current academic year, Desmet and Miller will coordinate the studies of 4,000 students in more than 170 composition sections taught by 100 instructors.

“It all goes by like a dream,” Miller says jokingly of the numbers.

“I’m sure we serve more students than some colleges,” says Desmet.

Indeed, a review of the University System of Georgia’s Web site reveals a number of member institutions that have enrollments of less than 4,000 students. And because completion of English 1101 and 1102 is required for graduation (except for those who exempt), the FYC program serves nearly every first-year student at UGA-a situation unlike that of any other academic program on campus.

The program’s pool of 100 teachers is made up of teaching assistants, who are working on M.A.s and Ph.D.s, and instructors. “We’ve got a Ph.D. from Emory, a mystery novelist, a retired professor from the Indiana University system, creative writers teaching in addition to other jobs,” says Demest. “They’re a rather unusual group. We’ve been able to recruit some very, very good people.”

Mark Meredith, an FYC student this semester, agrees with Desmet on the quality of FYC instructors.

“My teacher is excellent and has made my English experience great. English 1101 inspires me to want to be a better writer,” he says.

Over the years, the FYC has evolved in a number of ways. The program began by offering regular, ESOL (English for speakers of other languages) and honors sections of the composition courses. In 1997, online sections were added along with sections offered in the Oglethorpe House dormitory. Recently “learning community” sections have been added as part of the first-year experience initiative in Creswell Hall.

There have been a few name changes, too, from the Freshman English Program to First-Year Writing Program to the current First-Year Composition Program.

“We liked the ‘first year’ because it was gender neutral,” says Miller. As for the shift from “writing” to “composition,” Desmet explains that “‘composition’ is a more malleable term, and since we’re moving into electronic texts and multimedia sorts of things. . . . ‘composition’ is a more plastic idea of what we’re producing.”

The Oglethorpe House sections came about at a time when the FYC Program was short on computer lab space. Now there are three English labs exclusively for FYC students and eight FYC classrooms equipped with projectors and Web capabilities that allow instructors to use EMMA (English Markup and Management Application), a software program designed for the FYC Program by English department faculty and technology staff that easily points out students’ errors and reveals to them the structures of their essays.

According to Desmet and Miller, EMMA also has made possible one of the most significant evolutions in the FYC Program: the progression from five papers and a final exam to four papers and a portfolio.

“Being able to use [EMMA] to switch to the portfolio method of evaluating students’ work has allowed us to incorporate a lot more of the pedagogy that we’ve wanted but just haven’t been able to do,” says Miller.

“It allows students to work on revision; it gives them the whole semester to develop their skills and to present their best face,” she says. “I think the portfolio system challenges bright students more than the other system.”

“After only a few weeks I have learned how to write better arguments and have erased a couple of bad habits,” says Kelly McKay, another current FYC student. “Not only have I learned what to do, I’ve also, and more importantly, learned what not to do in my writing. FYC is helping me write papers in other classes.”

Since 1998, the FYC Program has seen an increase of about 1,000 students. Desmet and Miller report the jump can be accounted for through an overall enrollment increase rather than an increase in students who do not pass the proficiency tests.

“[I believe] our students are getting better and better,” says Desmet. “I would say the sort of basic writing problems, like basic grammatical errors, have gone down, and we’re able to focus more on rhetoric and less on grammar.”

After visiting a learning community class in Creswell Hall, Miller says that “the level of expertise with the technology is definitely up. I saw those kids with their laptops bringing up their essays in EMMA in class.”

“I think what I’m most proud of in the end is our teaching assistant program. I think we have the best TA training on campus,” says Desmet.

“This is probably the only class that most first-year students will take that is a small class,” she says. “This is one place where they get connected. Our TAs write so many letters of recommendation because they get involved with the students. We play a really meaningful role on campus.”