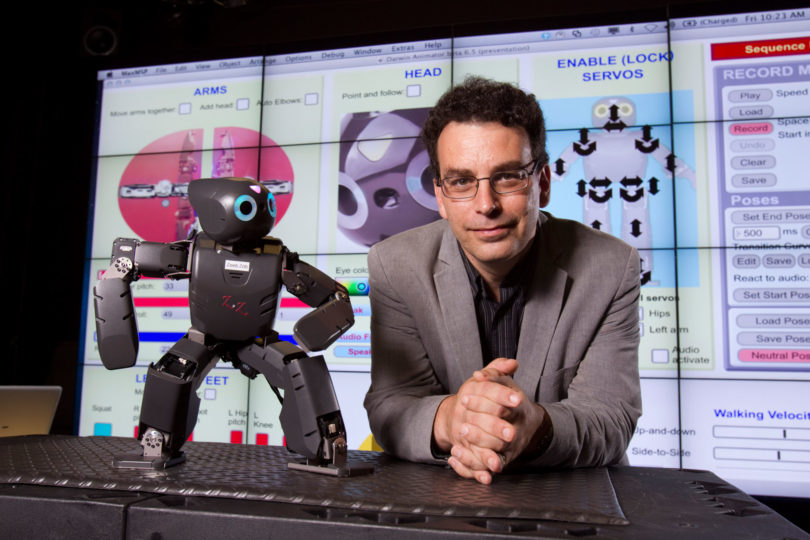 Athens, Ga. – A form of early sketch comedy—or commedia dell’arte—is opening the doors to the future of theater and robotics at the University of Georgia.

This collaboration of art and science will be presented in “Commedia Robotica” Dec. 1 at 8 p.m. and Dec. 2 at 4 p.m. in the Cellar Theatre of the Fine Arts Building on Baldwin Street. Both workshops are free and open to the public.

Characterized by masked archetypes and improvised performances based on sketches, commedia dell’arte began in Italy in the 14th century. At UGA, it’s providing a backdrop for UGA theater professor David Saltz and associate engineering professor Chi Thai as they bring robot Zeeb Zob to theatrical life.

Zeeb Zob is a humanoid robot with built-in cameras, microphones, speakers, LED eyes and the potential for research and programming. The DARwIn-OP robot was made by Korean manufacturer ROBOTIS through collaboration with Purdue University, Virginia Tech and the University of Pennsylvania, with funding from the National Science Foundation.

“It’s interesting for both theater and computer science,” said Saltz, who is head of the department of theatre and film studies in the UGA Franklin College of Arts and Sciences. “In theater, film and animation, our job is to create simulated humanity. To be expressive, to create characters—you’re taking something that isn’t real and making it understandable on a human level. Here’s this chunk of metal. Let’s make it a good actor and see what we have to put into it to make it really act.”

Thai saw the mutual benefits for theater and robots when he first brought Zeeb Zob to Saltz. His students in the UGA College of Engineering participated in movement workshops to better understand how the body works and to then create more natural movements in robots. Now Saltz’s theater students are collaborating with and performing alongside their robot counterpart.

“Working on this project has allowed us to better understand human-robot interactions,” said Thai, who specializes in spectroscopy for biosystems and educational robotics. “We are investigating several research opportunities, including adapting a Kinect camera to capture and codify human actor gestures into data that can be used to teach robots intelligent responses and developing computer control algorithms to provide more emotive robot motions while taking into consideration that a robot is only an assembly of motors and linkages.”

For Saltz, the stronger route to creating convincing, human-like robots is through character, rather than simply focusing on expressing realistic emotions.

“There’s a lot of work on emotion—when people talk about teaching robots to be more human, they’re usually talking about emotion and take character for granted,” he said.

He compares his work to animation and puppetry, in which many characters that are completely inhuman physically become believable due to the strength of their character design and personality, rather than reproduced emotional signals without context.

The opportunity to make Zeeb Zob a commedia performer rose out of need to showcase its physicality, despite its limitations. One of the major concerns was the robot’s immobile face.

“Commedia performers use masks that remove most of their faces from the equation anyway, so Zeeb Zob’s lack of facial expressions wouldn’t be a problem,” Saltz said. “Plus, the easily recognizable stock characters and traditional plot structure make the perfect first steps for someone new to acting-and also someone new to being human.”

For the students involved, the experience has been eye opening.

“Working with Zeeb has been really fun,” said Paige Pulaski, a senior theatre and mass media arts double major from Suwanee who will be performing with Zeeb Zob in the workshops. “I feel sort of proud of her because she learns something new each day.”

Above all, the show is a performance, Saltz said.

“I want the audience to feel like they saw any other performance—to see it as a really good commedia performance and not to think of it just as science fair,” he said. “It’s definitely art.”