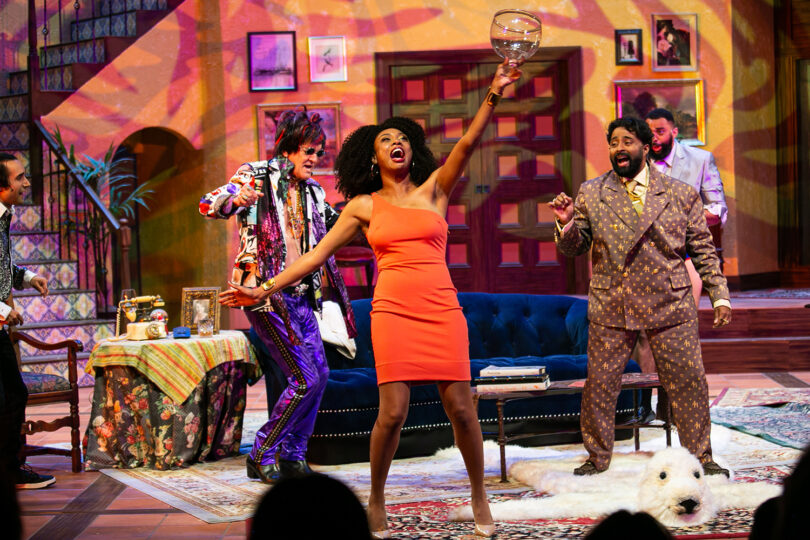 A scene from the play "Swindlers." (Photo by Casey Gardner Ford)

Two professors worked on a professional production over the summer

Over the summer, two faculty members from the University of Georgia department of theatre and film studies worked with the Aurora Theatre and Broadway Factor to bring Chris Anthony Ferrer’s debut play, “Swindlers,” to life. The play ran at the Aurora Theatre in Lawrenceville in May and June.

“Working with a new playwright is always exciting because it’s the world’s first premiere of a new play, and you get to design everything for the first time with no previous iterations,” said Ingermann. “You really have this amazing freedom to envision everything from scratch.”

Ray starts the process of scenic design by reading the script multiple times and figuring out the space. This is a two-pronged approach as she must decide what the space looks like aesthetically and how it works functionally.

“There is a lot of space planning and dealing with sight lines,” Ray said. “How do I facilitate certain actions and make room for the number of people required?”

After going over sketches with the director, she builds a model version of the set as well as drafts the design in the appropriate scale. While the set is being built, Ray works with the paint team to finalize colors and textures.

“Then we talk through all the props that are used in the show, including anything the actors will interact with and set dressing such as curtains or wall art,” said Ray. “This was a heavily dressed set. There were lots of rugs and taxidermy on the walls to show the eccentricities of the character.”

Ray brings deep experience to her work as a scenic designer, with multiple credits from Hollywood and Broadway after years spent in the industry. She has designed scenery for feature films including “Love & Other Drugs,” “Abduction” and “13 Days.” Her television credits include “X-Files,” “Babylon 5,” “Crusade” and various television movies. Her experience as a practitioner informs her work with UGA students and colleagues and keeps her in demand as a professional.

“When talking to my students about this job, I tell them I’m an architect, but I don’t have to deal with codes,” said Ray. “I’m an interior designer. I’m a painter. I’m a sculptor. I’m a historian. I get to do all the best parts of all these jobs rolled into one.” 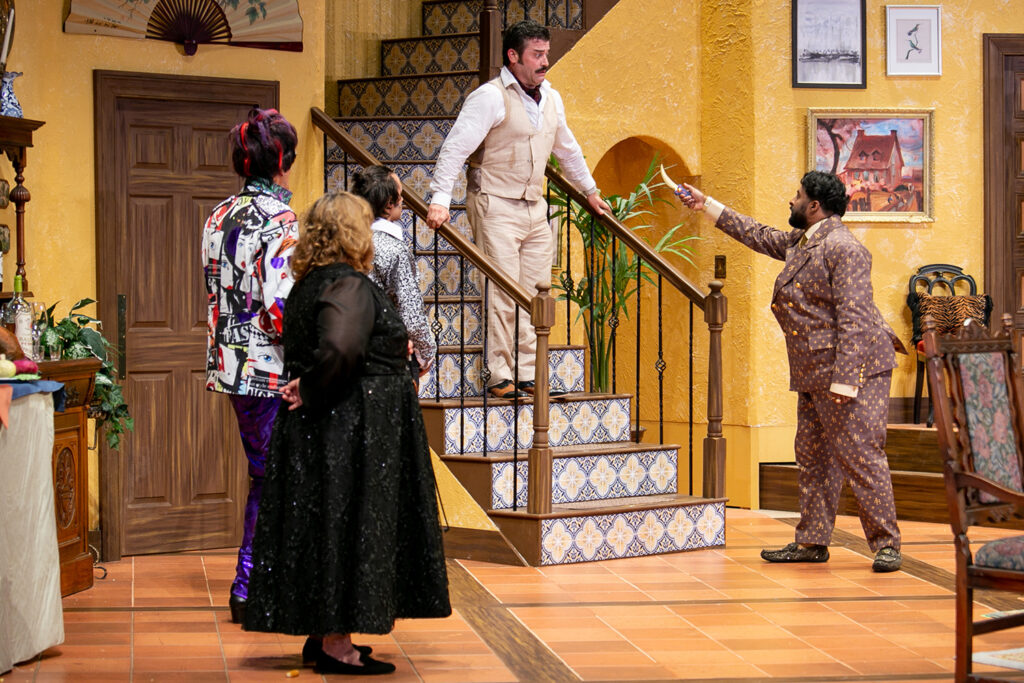 A scene from the play “Swindlers.” (Photo by Casey Gardner Ford)

To start the process of costume design, Ingermann reads the script and talks with the playwright and director to make sure he has an accurate understanding of the characters and their motivations.

“What I’m bringing should add more flavor to what is laid out on the page,” said Ingermann. “I need to know who the characters are before I can decide what they will wear.”

Once he knows the characters, he gets to know the setting. “Swindlers” takes place in Miami, so Ingermann pulled inspiration from research and his own life as a Florida native. Ingermann has worked on dozens of professional productions, including original costume designs for “Disney on Ice: Dare to Dream” and Sundance award winner “2×4.” His experience makes him a great resource for innovative productions and students alike, with an intuition to connect design with character in a way that strengthens both.

“Fairly quickly in my research, I came across an article about a man that pretended to be a Saudi prince. He presented himself with expensive cars, jewelry and clothing,” said Ingermann. “Everything he wore was a name brand, and that led me to this idea to make a similar character all about the label, so I created this suit that was covered in the brand name, but it was the character’s initials. This was an aesthetic that the playwright hadn’t considered before, but he loved the idea.”

Once Ingermann has designed the clothes for the characters, he sources the fabric and oversees the construction of the costumes, working closely with the costume shop at the Aurora Theatre. They went through several iterations of the designs with cheaper fabric, working on the cut and fit with the actors before creating the final piece.

“It was great working with an amazing ensemble of performers and crew,” said Ingermann. “It came together, and I think the audience had a blast every evening.”

“Swindler” was produced through a partnership between the Aurora Theatre and Broadway Factor. The Aurora Theatre was co-founded by Ann-Carol Pence and Anthony Rodriguez (BFA Drama ’91) and has garnered numerous accolades over the years. Broadway Factor founders and producing partners Jim Kierstead and William Fernandez are recipients of Tony Awards, Emmy Awards and a Pulitzer Prize. Their resumes include hit like musicals “Mrs. Doubtfire” and “Kinky Boots.”